but they're saying it

Tonight--not that this was ever a part of my childhood--I've got the commentary track playing on Meatballs. Director Ivan Reitman and writer/producer Daniel Goldberg.

They might not say anything interesting. I'm going in blind.

Opening scene was a pickup. I've already read about the stuff in Tripper's cabin, and Tripper's announcements were done after most of the production.

Sidenote, as I maybe figure out what they're rambling about regarding casting Bill Murray: the "sombrero" Tripper gives Rudy later is visible on the wall early in the film. And, it's got me thinking about props. But, not hat props. I've had a problem recently with photograph props. For example, I saw The Snowman today--it's not awful, but it is quite lazily and haphazardly edited--and noticed that Harry's (Michael Fassbender) counter has this picture frame with five photos, him and his ex and her son. And, the photos look like they were all taken at the same event. And, that's a weird way to group photos, in my opinion. But, you know, practically speaking, these characters haven't actually had a life together. So, someone has to take photos to put in that frame. But, they couldn't manage a few different costumes? Still, within the universe of the film, that these photos are in the same frame together isn't as weird as the situation from The Foreigner; see Liam Hennessy (Pierce Brosnan) has a wife and daughter. Wife is part of the film but daughter never really matters much. Anyway, on his desk in his office is a photo of them, apparently taken at their ranch house. That's fine. But then in a different frame behind his desk, is a photo that was taken maybe seconds before or later. Same outfits, same location almost exactly. Then, later, at that ranch house, there's another photo from that same photo shoot on the wall. Same outfits, same location. And, I'm wondering about these lazy prop folks who are tasked to take photos and can't be bothered to connect with the costume department, or to bother taking photos in different locations or at least from different directions.

Anyway, early commentary track is a lot of talk about casting people, how they didn't have Bill Murray when they started filming what was supposed to be a film about the CITs. Tripper was a bigger character than they expected and they needed more of him, and needed to rework the story. Murray's first day of filming included the bit with him telling Spaz he thought he had a chance, then leading the male CITs along past campers, past the female CITs and over to the trash can, where he rips up the rules and leaves them in that trash can in case they want to read them.

Cast members hooked up and broke up within the 30-ish day production schedule.

First cut of the film was around 2 hours, with a lot less Tripper-Rudy stuff, and was very "diffuse." They cut out nearly an hour, then shot new stuff over three days, including the bus station scene.

They're talking about the loneliness of Rudy Gerner and I'm reminded of the first night at camp in Alaska. I had this awesome trench coat, bought a few years earlier when my family went to Ireland and England. Somewhere between the airport--where I was the first to arrive that day, so I ended up waiting around for a few hours with a couple of the counselors as other campers from out-of-state arrived--and the campsite--an hour and half or so by bus, I believe--

Meanwhile, some great tidbits in the commentary about shooting coverage on the wrestling scene with Tripper and Roxanne (Kate Lynch). Reminds me a bit of some of Robert Rodriguez' commentary on El Mariachi, where he talks about planning his shots ahead, including when he wants to pull focus, so he can use less filmstock when it comes time to actually shoot.

Also, Murray wrote the kidnapping scene. Because he wanted to give more to the other actors.

But, I was talking about my trench coat. So, it's not until we've made it to camp, been shown to our dorms--two boys dorms, two girls dorms, each dorm with three cabins--and we're getting our first big introductory talk from our counselor, that I realize my coat is not with my bag. Didn't even have a bed assigned yet and I realize my coat is gone.

Chris Makepeace had grown between shoots and reshoots, and was getting some facial hair. Murray showed him how to shave. 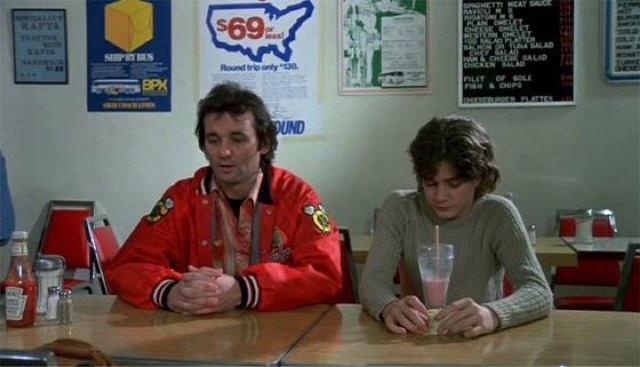 So, I can't remember if I waited for the counselor to finish talking or immediately headed for the bus. A few hundred yard walk back to the center of camp. It was still light out because summer in Alaska, but it was probably late evening. I get back to the bus, and they've totally unpacked the luggage storage underneath. They've found no coat. Now, I loved that coat. I would get a replacement later that summer, but it wasn't as nice, not as long, not as free flowing--I've got a cape used for the occasional costume that is nice and free flowing like that coat was. I immediately missed that coat. And it was upsetting. And, I wandered. I had no interest right then in being in a cabin, or being around a bunch of strangers (even if I was about to spend part of the summer with them).

Eventually, I made it back to the big cabin at our dorm. That's where my bag was. The beds were all assigned. I went to one of the smaller cabins. The beds were assigned. I went to the other. And, it seemed that one, too, was all full. Which, given my occasional manic panic episodes, was not a nice addition to my day. And, because my social awkwardness gets worse when my mood gets worse, I didn't immediately find the counselor and tell him I didn't have a bed. Instead, I wandered some more, lamenting the loss of my coat, imagining having no particular place to sleep during my stay in Alaska. Ever the outrageous imagination, mine is.

Meanwhile, by the way, Reitman and Goldberg have been rambling for a bit about a big screening of the film. And negotiating with studios.

At some point, I calmed down, or just realized that wandering around with no coat and no bed was accomplishing nothing. And, I was on my way back to our dorm's main cabin to talk to the counselor and a friend of mine, who went to my same school--in case I haven't made it clear, this camp was owned by the church I grew up in--the Worldwide Church of God--which also ran the private school I attended here in California. There were four of us from our school there at camp. One of them asked me what I was doing. I said I hadn't gotten a bed yet, I probably said something about my missing coat, too. And, I'm sure I was on the verge of getting emotional about all of it all over again. And, he says, oh, there's a bed in here, still. That third cabin. When I looked there, several bags were on one bed that no one has actually claimed. I claimed it now, I put my bag below it, and I was probably asleep not long after.

Next day, I was over the bed situation completely. I would lament the loss of my coat a bit more, but there was stuff to do, activities, games, new people to hang out with. You know, summer camp.

Meanwhile, a lot of the commentary is really about how disjointed this production was. Reitman just summarized it as, Movies aren't made, they're remade. It's all about the editing, and in this case the pickups. Counter to the thing about the prop photos above, consider this production detail: all of the scenes in Tripper's cabin were shot in one day. But, he and Rudy have multiple costume changes, and there's a progression of their relationship.

Campfire scene, there had been some drinking.

Limited takes on Tripper's rally speech because Murray was putting everything into his voice. Plus, they had actual campers as extras, and they and the other actors had no idea what was coming.

Murray, understandably, didn't like going sincere. That wasn't his thing. Which I find interesting, actually, because if not for the impression of his sincere interest in Rudy, even if it is hidden most of the time in sarcasm, the film wouldn't be the film it is. Of course, that is Murray's thing. No matter how awful he is, no matter how many jokes he makes, no matter how many insults, you always get the impression that his characters really do care about everybody else; they just have trouble admitting it.

The slow motion race finish wasn't filmed that way. They had to overprint frames to fake it.

And, making this film was both a "miracle" and a "learning experience."