i don't need any of this

Why is The Jerk funny?

I mean, is absurdity enough? It holds up as something funny, so perhaps absurdity can be timeless. Roger Ebert makes a distinction in his review between what he calls Funny Hat and Funny Logic approaches. For example, it is funny that Navin grew up with a black family in Mississippi and thinks he is black. When he learns that he was left on their doorstep, and he sets out on the road, he wears a bomber's helmet with goggles. He looks ridiculous. But, there is no reason that he grew up black (except for a little racial/cultural appropriation in the satire to come, maybe), and no reason he wears that helmet, except that the imagery is, on a very simplistic level, funny. (Like the visual of Navin's birthday dinner: tuna on white bread with mayonnaise, a Tab, and two twinkles.) This is Roger's Funny Hat humor. The hat is funny because it looks funny. The humor does not come from the reason Navin wear's the hat, it just comes from the visual. Similarly, when Navin thinks those oil cans are spontaneously exploding, and then thinks the guy with the rifle is aiming at the cans, the only "logic" comes from Navin being an idiot. But, being an idiot can take a story only so far.

You could hitchhike to the end of the fence, or think John Denver is full of shit because you are in the wrong state, or you could accidentally become a shrimp boat magnate, but without a plot to tie your story together--including a love interest because, well, Hollywood--there isn't much there there. 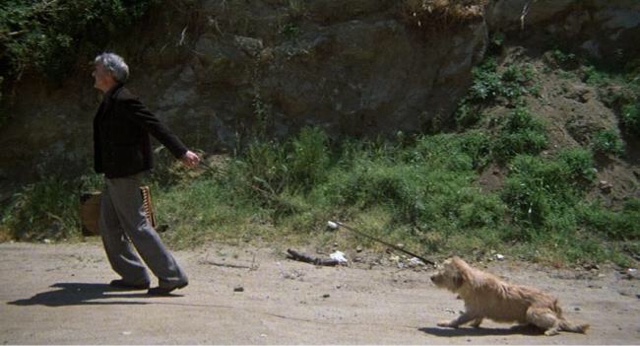 Some of the satirical stuff is easier comedy--the sign: GAS PRICES: If you have to ask you can't afford it--in the 1970s, that's pretty good on its own as a comedic visual (in case you don't know you're 70s history, there was an oil crisis in '73 and '74; barrels rose from $3 to $12, retail gas prices raised from an average of 38.5 cents to 55.1 cents a gallon. There were lines at gas stations after Nixon suggested gas stations not sell gas Saturday night or Sunday. It was a whole thing. [Reportedly, gas shortages at the time of filming had Steve Martin and Carl Reiner carpooling to the set.]

Navin's almost accidental rise as a rich man is the same way. Like the Madman picking Navin's name randomly out of a phone book. Much of the plot of The Jerk is built on these random events. Which could be taken as an indictment of the American Dream. Add the Pizza in a Cup or even the Mask-o-Derm Marie demonstrates at May Company. Or the nouveau riche bit when Marie and Navin go to the fancy restaurant and don't understand wine or escargot--

Actually, that scene is one that Janet Maslin called, in her New York Times review, an example of the film's "emphasis on comic sophistication." But, that's the thing about comedy; as Roger puts it, "the question of whether the comedy was 'good' or 'bad' depends almost entirely upon whether or not the reviewer was amused." Except, here's my thing: I am amused by The Jerk, but I am also pretty sure that it's not that great a movie. But, however much Navin Johnson misunderstands the world around him, just like Lloyd Christmas or Forrest Gump so many years later, he's just so damned optimistic that it is hard to really dislike him. Or, as Maslin describes the sweetness between Navin and Marie, "even when they sing a duet of 'Tonight You Belong to Me,' [they] carr[y] sweetness to what could easily have become an intolerable extreme" but they don't hit that extreme. The film is funny, and at times it's sweet.

And, the water-smudged breakup letter is hilarious.

As is the Madman's explanation when he happens to be the guy bringing Navin his royalty check from the Opti-Grab: "That was the old me. I was a little mixed-up at the time. I had a bad marriage. I just gave up smoking. I'm okay now."

And the woman hitting Marie after the Mask-o-Derm is removed.

And the punishment for early withdrawal.

And the cat juggling.

My biggest complaint is that the third act feels like a cop out. He loses all his money, loses Marie, and ends up on the street, but then his family shows up to rescue him and he and Marie get a happy ending... that they haven't earned.

And, that's a big part of what one might learn from this film. Hollywood romance, no matter the bumps in the road, gets you a happy ending. And, no matter how stupid you are, how little effort you ever put into succeeding in life, no matter where you were born, you can succeed.

Hell, you can even be president.

But, you can also lose it all in a moment, when your fad wears out.