Rudy Gerner (Chris Makepeace) may have a self-esteem problem, but he's got a great view on what he wants out of life... or at least what he doesn't want. Plus, you've got Tripper's whole rallying cry about it not mattering if you win or lose. And, I think some of what this movie instilled in little kid me is obvious. Outside of fiction--i.e. when I'm playing a game or writing a story--I have no interest in doing... well, evil. Doing bad things. Hurting people.

That doesn't mean, in any exclusive way, that I don't do bad things. I'm not sure anyone really wants to do bad things. Some people just lack the empathy and understanding to realize the consequences of their actions. Some people, given power--and its corrupting influence--inevitably take advantage. And even the best person, in a moment of weakness, can do the wrong thing. But, there are no mustache-twirling villains in the real world. There are bullies, there are manipulators and power-hungry bastards. There are murderers and rapists. But, in fiction, the villain has the benefit of glee.

Still, I've said often in this blog that I'm a bleeding heart liberal. Even in D&D, one of my adventurer characters was a pacifist who only turned to violence as a last resort. Perhaps because I've always surrounded myself with fiction, or maybe because of some inherent, and quite human, damage, I have always been fascinated by evil, by evil characters, by the villain who consciously turns to villainy. But, Meatballs is far from this. There's barely a mean spirit anywhere in the film. Even Lance Cashman (Ron Barry) seems like he's just desperate for attention more than anything else. And, he's more a simplistic type, worthy of the most basic dislike on sight--because sometimes movies need to keep things simple when it comes to minor characters--more than he's a bad person. He doesn't really do anything bad, he's just a little skeevy and full of himself. 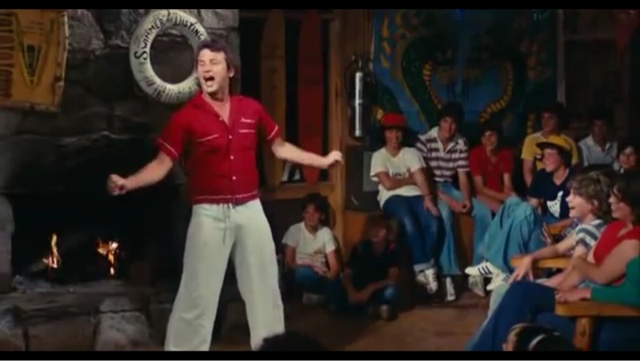 Add to this the urge to do your best or at least have a good time, regardless of whether or not you actually win. When I play a board game, I'd rather have a good time and lose than obsess about winning. When my character dies in D&D, within the narrative, it would be nice to be resurrected, but really, because I'm obsessive and certain apps make character creation extremely easy, I've got multiple backup characters ready to go at any time. To be fair, the longest any of my characters has survived is maybe five months.

I do try to win, of course. But, I don't mind losing as long as it was fun.

It occurs to me, though, that this isn't always a positive. I mean, outside of the gaming table, this also means I'm not as ambitious as some people. I might have big dreams but lack the ambition to really get there. And, as long as some basic things are good, I don't seek more. I want more, but I don't seek it. Like a renewed love life, for example. I've got friends. I've got my kids. I've got movies and tv. I might want something romantic in my life, but I don't need it, and I don't make the effort to get it. Like, as long as life is pretty fun, I don't need to win, I don't need to have everything. I'm reminded of an old tv ad--I think it was for Diet Coke, but it might have been for another soda--cute girl is being interviewed for a dating service, and they're asking about her hobbies and whatnot, and she talks about doing stuff with her friends, and the offscreen interviewer tells her that her life sounds like it's pretty good. And, she realizes--as she's drinking the soda in question, of course--that, yeah, her life's pretty good. The implication is she doesn't even need the dating service. I get that.

Meanwhile, sociopathic assholes get ahead in the world.

I could probably use a little more badness in my life, a little more urge to win. Instead, I've got a nice, wholesome Meatballs inside me, reminding me that as long as it's all in good fun you can play jokes on people, as long as you put forth a little effort you can find love, and sometimes victory means pulling someone else's pants down and running away...

Well, maybe not that last one.