Halloween is only tangentially connected to the classic urban legend about the babysitter and the man upstairs. But common elements to them both are important in the film. This is before the final girl was more defined, keep in mind. Laurie's status as babysitter was less a hallmark to separate her from her friends--remember, Annie is also a babysitter, and Lynda is definitely familiar with Wallace house (though she may have just come by while Annie or Laurie was babysitting before)--but to normalize her. These are everyday, regular teenage girls. They call one another, they call their boyfriends, they call boys for on one another's behalf. Regarding that urban legend about the babysitter,

Folklorist Sue Samuelson, who examined hundreds of unpublished "Man Upstairs" stories filed in American folklore archives, concluded that the telephone is the most important and emotionally-loaded item in the plot: the assailant is harassing his victim through the device that is her own favorite means of communication. (Brunvand, 1981, pp. 55-56)

Babysitting, Samuelson points out, is an important socializing experience for young women, allowing them to practice their future roles, imposed on them in a male-dominated society, as homemakers and mothers. (ibid)

Laurie often seems to reflect the core characteristics of the oppressive "cult of the true womanhood" which restricted the actions of many women during the nineteenth century (Welter). The four Cardinal virtues of a "true woman" were: purity, piety, submissiveness, and domesticity. (p. 29)

Clover (1987)* tells us, "The Final Girl of the slasher film is presented from the outset as the main character" (p. 204). Though, as I pointed out yesterday, Annie does have a significant amount of screentime, we do meet Laurie earlier and spend increasingly more time with her as the film continues. Clover continues: "The practiced viewer distinguishes her from her friends minutes into the film." This is an interesting detail here, because I'm trying to deal with Halloween as it was at the time. While the slasher film subgenre would later be defined so as to include prior films--notably, Peeping Tom, Psycho, and The Texas Chain Saw Massacre--in 1978, it was not a defined thing. The audience then would not have identified the good girl as the one who will survive. Additionally, it is worth pointing out that even good girl Laurie Strode smokes pot along with Annie as they are heading out to babysit. (I suppose we're lucky, given the tangential relationship to urban legends here (and in the sequel) that one of them didn't microwave a baby.) "She is the Girl Scout, the bookworm, the mechanic... she is not sexually active." As Michael J. Anderson (2007, August 16) points out in his film blog Tativille, "even when Annie does land [Laurie] a date for the upcoming homecoming dance, [Laurie] protests vociferously after Annie tells Laurie's date of [her] attraction for him. She seems to be in no rush to join her friends in their sexual activity" (para. 7). And, while Clover specifies the phallic nature of the slasher killer's weapons and the "killer's phallic purpose, as he thrusts his drill or knife into the trembling bodies of young women, [which] is unmistakeable" (p. 209), I argued a contrary point, day 389 - some stupid killer stalking some big-breasted girl who can't act, 24 August 2014:

I want to come back to those weapons--Laurie Strode's weapons. The supposedly phallic weapons she uses against Michael Myers are a knitting needle, a carving knife, and a clothes hanger. Clover suggests the Final Girl "meets the killer on his own terms" with the stabbing and the penetrating and the phallic symbols (p. 210). But, I don't think it's fair to take every penetrative object as definitively, automatically phallic. [I might correct my phrasing now to say they are not definitively, automatically masculine, even if inherently phallic.] Even taking the male/female divide as a strict binary, Laurie's weapons fit in the feminine side of the Venn diagram of life. The knitting needle is a feminine item, to be sure, representative of the creation of clothes, of blankets, womanly work by societal standards.

(For the record, by the way, I am not approving of any of these standards, merely using them because that is how details get into film, by being generally accepted.)

The carving knife, specifically, is a womanly item as well, coming from and belonging in the kitchen. Unlike, of course, the hunting knife wielded by any of the various killers in the Scream films. And the hanger--again linked to clothing, hardly masculine. We could take these weapons as masculine because of their phallic, penetrative nature, or we could look to who these items belong to, per societal standards.

Not that little Robert Black (me), in his pre-operational stage of development, was thinking all of this through like this. The horror film was a fun and frightening ride, not much more. But, like any of the films from last month, or any of the upcoming ones that were fixtures of my childhood, they are more than just films, more than just simple viewing experiences. By the time I even remember watching most of them, my little developing brain would have already fixated on aspects of each film and remembered and remembered and remembered it so that its content was as much as piece of me as it was an exterior thing to be watched and entertained by. But, that is sort of the point in this deconstruction exercise, isn't it? However consciously or unconsciously I was thinking about this stuff, I was thinking about this stuff. Societal standards of gender roles were certainly all around me. That the babysitters in Halloween are female was normal and normalizing. That the killer was male, that he stalked his victims carefully, methodically, even slowly, but caught up to them nevertheless--this helped form my understanding of evil, as I said yesterday. Bryant (2014) even goes so far as to suggest, "The stark whiteness" of Michael's mask "exaggerates [his] Caucasian racial identit[y], which symbolically plays into racial ideological emphasis on the power that has been naturalized within the white male's authority." Something I would certainly consider now, but back then, and on an obviously more practical level in terms of filmmaking, I think it was more clear that the white mask just stood out against both dark doorways at night and the green plants around the city during the daylight scenes.

(Whenever I would eventually learn that it was a William Shatner mask painted white, that fact would amuse me, of course. I was a fan of Star Trek from some unknown point early in my childhood... watching reruns on TV, especially late at night once I had my tiny black & white TV that I could surreptitiously watch late at night beside my bed without being caught. I am tempted to entertain the idea of it meaning something that it's Captain Kirk, pop culture mainstay and icon of virility and masculinity that was coopted into being the killer here. But, I also know that they bought that particular mask because it was cheap. Still, painting it white, teasing out its hair, this does generalize his appearance so as to be vaguely white, vaguely menacing... But I repeat myself. Insert rimshot here.)

The whiteness of the mask is more convenience of visibility than symbology. 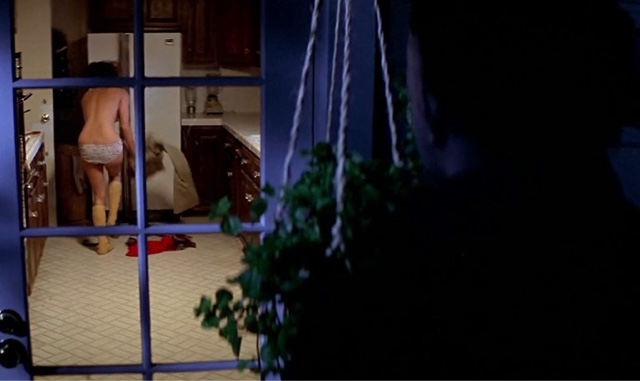 And, the basic devices of the slasher film--especially the big one, as Anderson describes it: "Sex is punished." He explains:

[Laurie] is the only young woman who is saved from Myers. Importantly, she is also the lone young actress who does not appear topless on screen, even as he seems to stalk her with the greatest degree of vehemence. She does not receive the punishment of the young women who do display themselves unknowingly for Myers and knowingly for the audience.

There's a bit of unnecessary confluence of actress and character there at the end, because the characters do not knowingly display themselves for the audience, rather for individual men in the cases of Judith and Lynda, and to no one at all in the case of Annie. But, in a film that depends so much on the use of first person perspective, putting the audience in the same voyeuristic position as Michael, the division is understandably blurred. Finally, Anderson says, "In this way, Halloween's sexual politics are definitively post-sexual revolution." And, as Brunvand (1981) says (regarding the Babysitter and the Man Upstairs story), "the tale is not just another scary story, but conveys a stern admonition to young women to adhere to society's traditional values" (p. 56).

But, that "greatest degree of vehemence" line from Anderson brings something to mind... that I will get to tomorrow.

* I actually didn't mean to be so... academic today. And you're lucky that I seem to have lent my copy of Clover's book to someone or there might have been even more fuel for my ranting.