I'm watching The Buddy Holly Story tonight. It's already late when I'm starting because, well, because life is a busy thing and I was feeling like I was getting sick earlier today--ended my argumentation class a bit early, even--and slept a bit this afternoon, had to take my daughter to gymnastics this evening. The Buddy Holly Story is an interesting case because it's actually been a good amount of years since I've watched it last... In fact, I don't really remember the last time I watched it, nor the first. And it's not like there are particular times watching it in between that stand out. But, this is movie that I saw plenty when I was young, and by release date, it came next, after Star Wars. This was my mom's movie, really. She grew up on Buddy Holly music. And, that mean's I grew up on Buddy Holly music. And Pink Floyd, and Journey, and Duran Duran... I had my mom's music, my dad's music, and six older sisters' music. Different influences, different directions.

The movie begins with a 9-minute sequence at a roller rink, which feels too long. Like it could have gotten to its point faster; rock and roll is new, The Buddy Holly Band plays rock and roll, and the world just isn't quite ready yet... Or at least old people aren't. Hell, the film conveys that point almost immediately then they start playing rock, but they play that whole song (after playing a non-rock song) and then another. Then, we're in church, the minister railing against rock and roll...

Which has me thinking about societal change more generally, about political change, about Overton Window sort of stuff. I've been paying too much attention to politics lately. The differences between gradual change and radical change. On Twitter and Facebook I watch people debating (and I take part, of course) gun control, free speech, protest. In my argumentation class, we're debating immigration (specifically DACA-related immigration).

Meanwhile, this film feels like a series of vignettes more than a story. Like here's another thing that happened. And another. And another. Common problem with biopics.

It's a little too much white-folks-invented-rock-and-roll, too. But, I'm willing to forgive it a bit on that, because this movie came out in 1978, and political correctness hadn't made us bother with historical honesty about such things just yet. I remember when I was in college the first time--I went to USC out of high school but dropped out after two years--a class conversation about political correctness and diversity on campus as if the two things were novelties. But, back in college just a few years ago, taking a History of American Pop Culture class--I was a history major for my BA, switched to Communication Studies for my MA--and we did this line by line comparison of...

INSERT: montage of me going through folders in my filing cabinet, finding my notes and handouts and papers from History 482b: Popular Culture in Twentieth-Century America, because I could not for the life of me remember what Elvis song it was that we compared to the original. I think it was "Mystery Train" but I can't find the handout and my handwritten notes on it in the stack of pages from that class, and I just googled the lyrics of both and didn't notice the distinct differences with a quick glance. But, it was a whole thing about how Elvis basically stole the song from (if it was "Mystery Train" [I eventually did find the sheet; it was "Mystery Train"]) Junior Parker, prettied up the lyrics a bit, and Elvis made big because Rock and Roll, racist white populace, charismatic white guy singing. Nevermind where the sound came from. 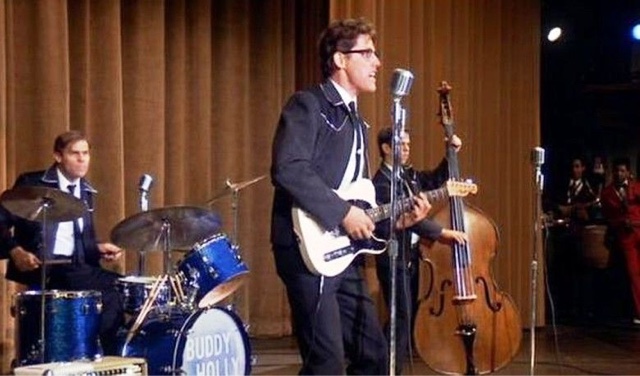 And, I write that as Buddy Holly plays the Apollo. Rob Jones, writing for The Delete Bin, 29 May 2014, suggests this performance "gloriously" broke the rule that "audiences and musicians of various races simply didn't mix." He explains:

Their appearance helped to demonstrate how that artistic reach [of the Apollo Theater] went beyond the confines of that particular [African American] culture, and that rock 'n' roll was indeed here to stay, in part because of its defiance about how those different races and cultures were expected to connect (or not) to each other.

Of course, any discussion of racial integration must eventually get to an awful point--we haven't really gotten that far. For example, just on the subject of music, regarding the country music festival in Vegas where people were killed two nights ago, people on the right and the left, for and against gun control, made the point that the audience was probably all Trump supporters. And, depending on who was saying it, they meant is as a derogatory sort of judgment, like those people have nothing to do with me, or they meant it as something positive, like I am one of those people. And, I don't know exactly how the numbers break down, but the appearance sometimes matters more than the facts (as I tell my argumentation students right before I insist they find facts to back up all of their claims).

(Or that movie in theaters right now, Victoria & Abdul.)

--might be representative of the reality--the audience did apparently cheer on Buddy Holly after being shocked that he was white--but there are better ways to play it.

(Like the Victoria & Abdul thing--maybe it is absolutely a true story, but it's a little too much of an echo of so many magic negro sort of movies at this point, and maybe it's just too late to tell that story. Had that movie come out in 1978, maybe I'd be more forgiving.)

And, I feel like I'd have a more singular and cohesive point if I hadn't put today's blog off until the end of the day. Or if the world wasn't falling apart.

And, I know exactly what this movie taught me when I was a kid. And, I'll get to that tomorrow.