I don't really want to talk about Heaven Can Wait again. If it taught me anything when I was a kid, it was bad things--that one guy can change the world with a few words, that love is magical and comes upon you out of nowhere, and it can conquer all. The film's take on reincarnation and the soul didn't fit with what church and bible class in school were teaching me, and neither take was particularly positive given I was being told regularly that the world was going to end. I mean, who cares if you go to heaven when you die, if your "soul" sits wound waiting for Christ to return and then you get to spend forever in the presence of God, or if you get a brand new body (maybe) after you die, when in a few short years this body you have right now is going to burn in a nuclear holocaust, or if by some slim chance it survives, you're going to die slowly from radiation poisoning, starvation, or some sort of post-apocalyptic factional violence? What points is romantic love when you're not even going to live to be an adult?

Side note: before Joe goes into that tunnel where he's yanked out of his body because his heavenly escort is playing the odds on him dying, a white convertible passes him. In it a brown-haired man and a blonde woman, and 1) I'm wondering if that's supposed to be Tony and Julia (if so, I figure that same car will be shown sometime later) and 2) I'm thinking it doesn't matter if it's supposed to be them, because I see the visual and I see them, and that's what matters, because that's my experience of the film. But then, I gotta think about what it means, because that is what I do. I see a waitress who dreams of visiting Paris in Groundhog Day, a ONE WAY sign in Happy Death Day, or Clementine changing her hair color on a regular basis in Eternal Sunshine of the Spotless Mind... or any symbolism in any film, or anything that I might interpret as symbolism in any film, and I think about it. Right there, watching the film in the dark theater, or watching it here at home, sitting on the couch (or, oddly, often the floor) and I get sidetracked in interpretive exercises because what matters so often is what it means. Sure, there's how it feels, too. There's narrative structure, there's characterization, there's performance, there's filmmaking, but what it means, what it becomes deep down inside me--that's what matters. Maybe, if there was anything (arguably) positive I took from this film way back when, it was Joe's attitude in dealing with his escort and with Mr. Jordan--or his anti-corporate arguments, but those are given hardly any screentime at all compared to the football training, the love story, or his wife and her lover trying to kill him--in that Joe is irreverent; he doesn't just accept what he's being told, nevermind the clouds, nevermind the Concorde being boarded by the dead, nevermind the implication of his new wife's homicidal impulse which Joe all but ignores because he's too busy falling for Betty, too busy working toward the Super Bowl, too busy (and then absolutely not busy enough) trying to fix ExoGrey's business practices. God himself could show up and Joe would probably argue with him about whatever came up. He's insubordinate, he impudent, he's rash, he's demanding, and he is willing to stand up for 1) what's right and 2) what he wants... Hell, I wish I took more from him when I was a kid. 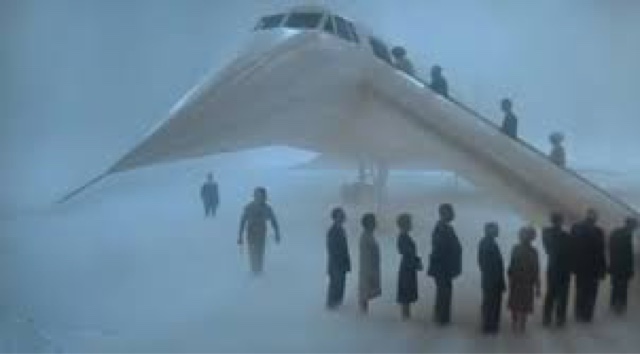 So, what does it mean, then? That Tony and Julia were passing Joe by, even as he's about to be the starting quarterback for the Los Angeles Rams. That Tony and Julia head into that same tunnel where that van is about to try to pass that camper. That they manage to get through before the oncoming vehicles are in the dark. That they get by and Joe doesn't. On the one hand, it's because his escort is trying to get him out before he suffers the pain of that oncoming van. On the other hand, if it' small odds, all probabilities, then there was a chance that Tony and Julia would have a head-on collision with that van, and Joe would ride right on past; maybe he would even be the one to call for help, to get an ambulance. And, Tony and Julia might be killed before they had the chance to poison Leo Farnsworth. So, Joe remains Joe, he gets to be starting quarterback against Dallas, and the Rams still get to the Super Bowl that year. But Leo also remains Leo, and he doesn't fall for Betty, romantically, or in terms of her business requests (or whatever threats she implies that she was ready to make), so he builds that factory in Pagglesham, and all those people are displaced, and many more are poisoned by the pollution. And, Farnsworth buys Haiti (or a bunch of Haitian land) and helps ruin the local economy there so he can grow some sugar for his First World customers. And his canning department keeps killing dolphins, and he's got the money to fight that lawsuit and either win or drag it out until the environmentalists just can't take it anymore. Leo remains Leo and the world is the worse for it.

But, Rams fans are happy either way.

But, what it really comes down to is this idea that everything about life is just odds and probabilities, probability and outcome. It's all percentages, all chance. We open at the beginning of time.

...to the beginning of life. How did this flower get here? What was its journey? Therefore, I should infer from analogy that probably all organic beings which have ever lived on this earth have descended from some one primordial form into which life was first breathed?

It is a journey of evolution.

The journey we all take. A journey that unites each and every one of us. Darwin writes that we all come from the very first single-cell organism.

Yet here I am.

And movies get lumped in with life, with religion, with everything and anything that I've ever heard, seen, done, or thought, and a butterfly can flap its wings in Beijing and in Central Park you get rain instead of sunshine, and I'll give you a winter prediction: it's gonna be cold, it's gonna be grey, and it's gonna last you the rest of your life. Because, what else is there but everything? All twisted up in our brains, vying for attention at any given moment. And, fake news and politics and work and family and movies and games all ask for attention, and your brain (my brain) tries to hold onto all of it. And, movie quotes interject themselves into life--No keys, but please my Paul--just as much as life interjects itself into movies. I mean, really, Children starving in India, and you're walking around with a whole sombrero full of peanuts. But, Who said life is fair? Where is that written? And what are any of us going to do about it when shit gets unfair? What do we do when are romantic ideals are beaten down and broken? What do we do when it doesn't matter what we do, because all the really good looking girls would still go out with the guys from Mohawk 'cause they've got all the money.

Because what are we but all these lines of dialogue--from life, from books, from movies, from imagined conversations in our heads--running quickly beside one another, against one another, across one another like all those lines of green 1s and 0s in The Matrix. A car drives into a tunnel. 1s and 0s, chance and happenstance. A beautiful woman (or man, or whatever) walks into your office, sits down at your gaming table, sits in the same classroom as you, does whatever wherever so that you fucking take notice and time freezes and romantic ideals are the only ideals and it's still just 1s and 0s, chance and happenstance. There's no Mr. Jordan. No God. No order except for that guided by physics and biology, and you can fuck with those all too easily, and you can dream and you can imagine, and you can balk when it's time to be bold, crack when it's time to stand up, and it's all just 1s and 0s, chance and happenstance. And, after all, tomorrow is another day, more chance, more happenstance... But not really and 1s or 0s because there's no simulation, just reality, just life, day in day out. So, figure out what it is that matters to you. Figure out what you need. The astray and the paddle game and that's all I need... And this remote control. The ashtray, the paddle game, and the remote control, and that's all I need. And these matches. The ashtray, and these matches, and the remote control, and the paddle ball... And this lamp. The ashtray, this paddle game, and the remote control, and the lamp, and that's all I need. And that's all I need, too. I don't need another thing, not one... Because it all goes together. One thing is another. One movie is another. One person is another. And, everything is illuminated in the light of the past. It is always along the side of us, on the inside, looking out. Still, the natural condition is one of insurmountable obstacles on the road to imminent disaster.

But, it's such a nice road sometimes.