make one good friend a summer...

I don't expect a lot of words today. Meatballs is a film I've seen dozens of times at least. And, if it was ever on cable in the past, I would likely stick around for a bit. It wasn't one of those few films that demanded I watch until the end even if it was late and I was about to go to bed--and, yes, those exist--but it's such a classic comedy, and something I know way too many lines from... (So many lines from this one have found themselves into my everyday life, and sometimes it makes me sad when people don't recognize those lines. They're not exactly known for their taste, though, so fuck 'em.)

It has its flaws. I don't know if it is, for lack of a better term, cinematically great. But, it works for what is is. An early version of what would probably peak with Porky's--an innocent sex comedy. With heart. 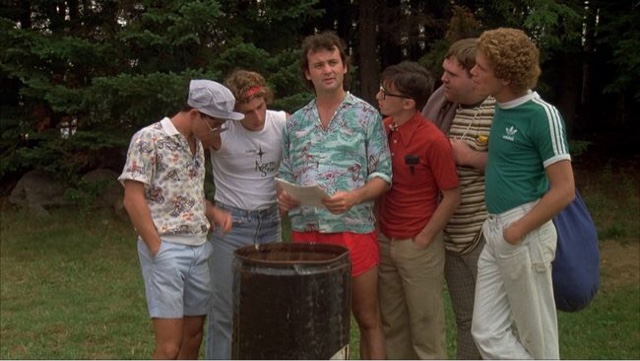 An interesting detail: my DVD of Meatballs had never actually been opened. I bought it just a year or two ago, for potential use in this blog, and never ended up watching it. So, for the first time in a while, I had to, you know (or maybe you don't, if you're particularly young), tear off the plastic; actually, I took it to the kitchen and cut into the edge of it with a knife from the knife block. Then, I had to remove that little security tape on the top edge, that bit of plastic that folds over from the top of the front cover to the top of the back cover and, oh so damn often, wouldn't come off in one piece back in the 90s--I think they used a stronger glue--and would take some serious effort to remove. This one came off easily. No alarm tag inside the case to peel away and trash. No booklet, not even a single sheet with chapter headings and a list of extras. Just a DVD, with a fairly plain label.

So, I switch out my HDMI cables--the Amazon Fire Box rejects the HDMI combination box I've got, so I just leave it plugged it all the time and on the rare occasion that I need the blu-ray player, I have to angle the tv out of the wood cabinet it's in, and without really being able to see what I'm doing, remove one HDMI cable and insert the other into the same slot. Then, it's DVD time (or sometimes thumb drive time, if the only way to watch a particular movie or whatever is by finding a copy of it online, not that I would ever do that).

This DVD includes a trailer for One for the Money, starring Katherine Heigl, and which I had never heard of, and am actually now--as Meatballs gets started--having a hard time remembering the details of. I think she's a private detective. Or maybe a cop. And... something happens. And, there's a guy, presumably played by an actor.

Next, a trailer for Baitshop, a comedy set in, well, a bait shop, and it stars comedian Bill Engvall and singer Billy Ray Cyrus. I never heard of that one before, and am not sure now that I want to have heard of it this time. It is--or appears to be--the kind of creatively bankrupt Hollywood crap that really should be left behind for... Well, honestly, bring on more remakes and reboots and sequels, with budgets and professional actors.

Then, a trailer for L.A. Story with Steve Martin, which it's been awhile since I've watched it but I remember being pretty good.

Finally, an ad for Epix, "the first premium channel that's not just on television" which is just so fucking quaint now, with Hulu and Netflix and Amazon Prime and every network having an online platform, and Crackle and Shudder and so many more.

Onto the movie. Early on, they're in the parking lot of a Kmart. And, I will always link Kmart with LEGO blocks. This is for two reasons: 1) I used to get LEGO sets there. Back in the day of the old Space sets. 2) They used to have these big LEGO models, like a life-size race car, and contests to guess the amount of blocks. I don't know the last time I saw a Kmart, let alone went inside one.

As for summer camp, I did get to go once. I was 15. I went to a church-owned camp in Alaska. Made some great friends that I never spoke to again. Played water polo in ice-cold lake water, rafted some whitewater rapids, not for the first or last time. Rode some bikes way too far over forest trails and city roads. Canoed. Shot some rifles. Lost an awesome trench coat. I wasn't the kid who got chased by the bear, though. I don't even remember that kid's name. I think he had red hair and glasses, and he was a preacher's kid. But, when he got to the bus and told us a bear chased him and one kid balked at the idea, he swore like a sailor. I did get to stay in the cabin with a against-the-rules-but-our-cabin-counselor-totally-agreed-not-to-tell-on-us stereo system, so we had some good tunes going. And, it was Alaska, in the summer, so it never really got dark. The sun would go down. But then it would be coming up again before dusk was over. Fortunately, most of our activities were tiring enough that sleep wasn't a problem. Plus, I have always been able to sleep anywhere, as long as I was tired. In a boat in the sun while fishing with my father. On a concrete floor. Sitting in a chair in a crowded student center on the campus of EMU. A little daylight wasn't going to stop me.

And I had a crush on a girl who would go on to be Miss Alaska in the Miss America Pageant several years later. In fact--and maybe I've told this story in this blog before, but I cannot imagine the context that it might have come up--there was this one adorable interaction between us in the camp phone booth. I was on the phone, talking to my family, because camp was halfway done, it was a Saturday, and there wasn't much to do. And she shows up. She actually lived not far from the camp, so she had no use for the phone. She was just wandering. She comes and joins me in the booth and says something along the line of me having to hurry up because of the line. There's no one waiting. I'm perplexed. She says, as if it is the most obvious thing (and as if she knows that I will get the reference, and I do get it), that Harvey is waiting. And, I swear that I lost track of whatever conversation was going on over the phone right in that moment, like some cinematic conceit out of a comedy. I was smitten, and nothing else mattered right then. All else was silence. Then she smiled as she realized I got the reference--for the record, Harvey is an invisible six-foot rabbit from the 1950 film of the same name.

It was one of the most "movie" moments of my life.

Me the fat kid with glasses, she the beautiful, and slightly rebellious, brunette with the amazing singing voice... I met her when she was singing "Wishing You Were Somehow Here Again" from the musical Phantom of the Opera--with which I was rather obsessed at the time--in the lodge. The last Saturday night of camp, when there was a stage show thing, she was at center stage, and louder than everybody else, on a rousing rendition of "John Jacob Jinglheimer Schmidt"--a song I had never heard and didn't know. This was my one and only time going to summer camp.

I wish I'd gotten to go more.

But, just from that one experience, Meatballs feels like a both a good amalgam of all that is summer camp--our camp may have been church-owned, but that didn't keep boys and girls from hooking up, for example--and a romanticization of same. The song "Good Friend" that plays over the montage of parent day is such a sappy 70s song, but it's also just so earnest about how people can get along if they just try. And, that's how the movie plays as well. It's more a series of vignettes than a film with a plot.

(Also, if you want to talk flaws, one relatively minor one--and one I only really noticed over time--is that the film shows all these events that should involve more regular campers--the basketball game, the dance--but it seems like there's little more than CITs, Tripper, Roxanne, and Mickey. And, just a handful of younger extras as campers. Footage like the parent day stuff suggests a far more crowded camp--I believe that footage was of actual campers, not extras.)

Similar to "Good Friend", the film's use of "Moondust" is sentimental, but it works. It's nice. It's sappy, but it's nice.

Maybe it's because the film is Canadian. It's all just so nice. Clementine Kruczynski would be disappointed in my choice of words, perhaps, but that's the best way to describe it. I mean, even all the times they leave Mickey and his bed and his table in strange places, it doesn't feel mean spirited. Or Fink's abrupt change of tone from the accusatory "You didn't do anything" to the joy of "You held her hand?"

And, as Tripper gets into his big rally speech, I must admit, the above might be "a lot of words" and I should apologize.