so get used to it

Gotta love a movie that has people walking out before the end.

Oh, jump forward a few decades. Forget the childhood deconstruction for the moment. I'm talking The Killing of a Sacred Deer, the latest film from director Yorgos Lanthimos. That's the guy behind the fairly bizarre Dogtooth, a nominee for Foreign Language Film at the Oscars several years ago, and for last year's The Lobster, bizarre but (maybe) a little more straightforward. He doesn't make films for a wide audience. He puts characters who don't quite speak like real people into situations that are strange, but that feel a little familiar. Dogtooth was all about how parents can manipulate the shape of their children by the way they raise them, the way they restrict them, the way they protect them. The Lobster was all about the need for companionship, for love, and when things don't go the way you want, the world might as well fall apart, you might as well not be a part of it anymore... It's a little emo, actually. The Killing of a Sacred Deer, on its surface is a modern take on the Greek story of Iphigenia and Agamemnon. But underneath, it's far simpler--a sort of meditation on mortality, that any time, any day, you might die. Never mind the manufactured scenario within the film, death waits for us all. The problem the characters have in the film--the adult characters at least--is that they don't quite seem to be living. So to speak.

Steven (Colin Farrell) is a successful surgeon, but he worries about fancy watches, and interacts with the child of a man who died on his operating table as much as, if not more so than, he interacts with his own kids. That's not a SPOILER, by the way. But, I imagine some are coming. His sex life with his wife Anna (Nicole Kidman) for example--she pretends she's under anesthesia and he starts up on her motionless body. Which, in another context might be just a fetish. But, he's a surgeon, and one has to wonder how he ever talked Anna into this, like in the middle surgery every day, he's thinking about sex with the patient...

The movie begins with a shot of a beating heart. Chest cavity open. It's a revenge story, but not driven by emotion. It's also, as I said, something more like a meditation on mortality. Someone will die at the end of the film. Like someone will die at the end of your life. It is inevitable. And, two things worked as--and sorry if I don't feel like quite explaining the term just now--punctum for me. Consider this something of a deconstruction of my more recent life, as opposed to the childhood deconstruction project in this blog of late. As an undergrad not too many years ago, I was on the speech team, I competed in every event at least once, but I particularly liked debate and interpretation. One of the pieces I performed as Dramatic Interpretation was Neil Labute's Iphigenia in Orem. It's a short play from his collection Bash. (Showtime aired a filmed version of the three monologue-based plays years ago (circa 1999), but I don't know it's available on DVD. You can get the book, though.) The gist--with a bit of SPOILERS--is a businessman thinking he's going to lose his job, sees how his family's lifestyle will be destroyed, so he kills his infant daughter to make life more affordable, makes it look accidental. As a monologue, cut down for time, it's a nice portrait of a man so enamored of his own success that he would risk ruin to protect it. The Killing of a Sacred Deer is about a doctor--Steven, who I've already mentioned--who has to choose who dies out of his two children or his wife, or risk them all dying. If not for the strangely inhuman dialogue in so much of the film, this could make for the same sort of monologue, get inside the head of a man willing to destroy his own family for the sake of... Well, it's almost for the sake of convenience, for the sake of modern civility, and capitalist success.

And, there I go making it political.

The second thing that worked as punctum for me, and what makes the film more overtly a meditative exercise than a straight sort of thriller (given its premise) is that somewhere around plot point one, Steven sits down to watch a movie with the young boy (Barry Keoghan) whose father died beneath his scalpel and the boy's mother (Alicia Silverstone). The movie they watch: Groundhog Day.

In particular, we see, then mostly hear in the background, the start of the date night sequence. Phil working his way closer to Rita. Day in, day out. He doesn't know when his loop will end. When his life will end. Steven knows that his family will die. There will even be a warning sign when death is close--they will bleed from the eyes. But, until then, there is just their partial paralysis, one by one, and his figurative paralysis, because no matter how much monetary success he has had, no matter how good a career he has--and we see him giving a speech to a very large crowd so he can be understood to be a surgeon of some renown--no matter the nice house, the good wife, the two and a half kids (they do have a dog), no matter the nice watches, the nice clothes, it can all be taken away from you at any moment because you are still mortal.

Phil Connors might be relatively good at his job, he might be a successful womanizer, but he's still an arrogant asshole who can lose everything that he thinks matters when he gets stuck in a time loop in Punxsutawney, PA. Or when he dies. Whether every day feels the same or you manage some variety, eventually, the time loop ends. 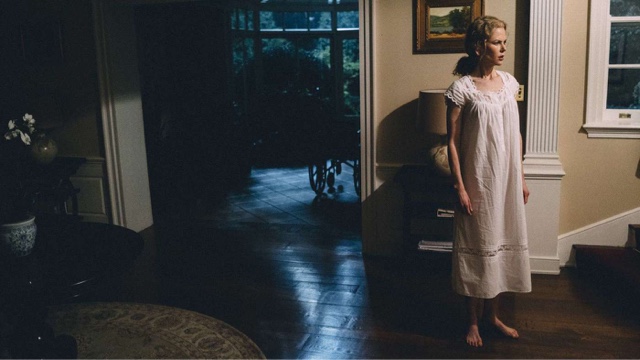 But, honestly, you won't like The Killing of a Sacred Deer. At least, probably not. Just playing the odds there. So, watch Groundhog Day again. Or watch that movie you used to watch whenever you were bored as a kid. Or do that thing you used to do when you were bored as a kid. Play a little bit in the sandbox of your childhood. Because, well... I'm reminded of Moonstruck, actually. Like Ronny's take on love:

Not like they told you love is, and I didn't know this either, but love don't make things nice. It ruins everything. It breaks your heart. It makes things a mess. We aren't here to make things perfect. The snowflakes are perfect. The stars are perfect. Not us. Not us! We are here to ruin ourselves and to break our hearts and love the wrong people and die. The storybooks are bullshit.

Or the much simpler take from Rose:

I just want you to know, no matter what you do, you're gonna die, just like everybody else.

In the meantime, live a life that's messy. Love who you can. And, be loved as well. Watch some good movies, some good television, some good plays, read some good books, make some good friends, and have a good time.