how do you sleep at night? you've never seen groundhog day?

Heaven Can Wait can wait. Because today was an awesome movie day. I had an unplanned class cancellation, so I made it to a couple movies in the afternoon (Marshall and then Professor Marston and the Wonder Women), then in the evening I took my daughter to see Happy Death Day because 1) she wanted to see it and it turned out to be a good horror film and 2) it's always fun to watch a time loop movie a second time. If you are out of the loop... And that wasn't a pun. If you are out of the loop, regarding Happy Death Day, think Scream (387 388 389 390 391 393 394) crossed with Groundhog Day (1... 365 + so many other entries)--except don't because Quentin Fottrell over at Market Watch seems to either think that mix is Hollywood out of ideas, because reusing one idea with another, and adding your own bits is bankrupt Hollywood at its finest, or some such bullshit. I mean, I think most remakes are cynical cash grabs from, yeah, a Hollywood out of ideas, or at least not trusting itself with ideas, but how many movies have there been? How many plots are available? One of those numbers is a lot fucking larger than the other.

Plus, something more original comes along--see Swiss Army Man, The Lobster, Brigsby Bear, for example--and no one sees it. That's not just cynical Hollywood throwing money at that same shallow fare time and time again. That's a cynical fucking audience, with too many options on their plates, and they are not going to risk their time and money on something unique and strange when there's superheroes (superheroes done far better lately than years ago, mind you) on the big screen, when there's basic horror films, when there are sequels and remakes with name recognition on their side. Of course, it's a catch-22; because, that audience is not only cynical and not only do they have too many other options, they also don't consistently buy into the remakes and sequels. And inconsistency means Hollywood has no reason to fix anything. Plus, they make so damn much product, inevitably most of it just won't make much money. So, Hollywood can justify buying things with name recognition, buying things that are going to easily be big and shiny and exciting. 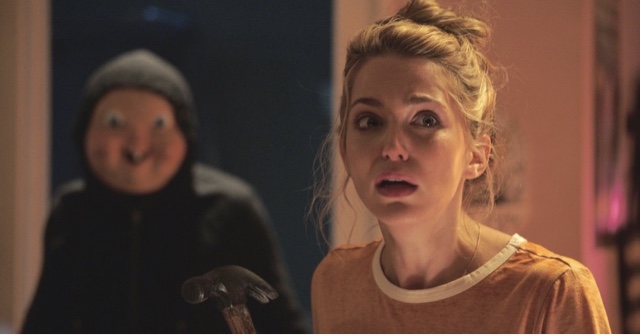 That being said, Happy Death Day actually was #1 this past weekend. But, it's a horror film in October. That's easy. #2 was Blade Runner 2049--good movie, but not, as one might say, a necessary sequel.

And, I have a fantastic habit of separating my cynicism (and my occasional disgust) from my viewing habits. This blog (and Movie Pass) have made that an easier choice. Plus, most of the bad films I've seen--because I've made an effort to see some really bad ones over the years--are entertaining in spite of their badness, because of their badness. And, for the record, since this entry is another interruption of my current attempt to deconstruct my childhood experience with film, 1) film was always around; my mother liked movies, my sisters liked movies, I liked movies, and I could even convince my father to head to the theater now and again

(like that time I got him to take me to see Project X--the Matthew Broderick one with the apes, not the all night party out of control one--by very subtly opening the Entertainment section of the Los Angeles Times to the full page ad for the film and leaving it on the floor in front of where he was sitting)

and I grew up in Pasadena, California, where we had multiple single-screen theaters when I was a kid, where there was already one multiplex as far back as I can remember, and another couple as I got older, and many by the time I was a teen and could get to a lot of movies by myself, plus we had The Academy, a second-run theater that made movies very very cheap. And, you know, it was the 80s, so home video was great, and before I was a teenager, we had two movie rental places we might frequent, and by the time I was a teen, there were more. And, in my late teens and my 20s, we lived 3 blocks from Now Playing Video, and 3/4 of a mile or so from a Blockbuster Video, so it was movies all the time. Add cable television to that and, if that hadn't been so much repetition of certain films along the way, my "seen it" list on IMDb should arguably be even bigger than it is. (And, really, it is missing some titles. I still find movies occasionally that I've not added previously to the list, and I add them.) 2) I make an effort to see bad movies, to see good movies, to see movies that aren't my go-to genres. Lately, if I've got the time, I see anything and everything that hits the big Pacific theater here in Glendale. And I occasionally head over to the Laemmle in Pasadena or the Hollywood Arclight for movies I figure will never get a wider release. And, 3) I love the little movies far more often than I love the big ones. I love the obscure, bizarre films far more often than I love the more basic, wider-audience-friendly ones. And, I mean this as phrased. It isn't that I love those films more but that more often those movies are the ones that I love, rather than just like, just enjoy, just appreciate. The three examples I gave above as examples of great little movies--Swiss Army Man, The Lobster, Brigsby Bear--are three of my favorite recent films. But, if you want to know movies I've rated as 10 in the past couple years, there are ones that had wider releases, ones that had more appeal and a bigger response. Logan. Get Out. And while Sing Street (1072 1073 1074 1075 1076 1077 1078 1079 1080 1081 1082 1083) might be my favorite musical from last year, I also loved La La Land (even though I had several complaints about that one). For an upcoming example, I have a feeling that I will detest Geostorm. It saddens me that some good actors got roped into that one. And it bothers me that people are probably going to fill up theaters to see it because it's destruction on an awesome level up on the big screen and that's something you can't really get on your phone or your tablet or your laptop or your TV... unless you've got a seriously big tv with stereo surround sound, in which case we should hang out and watch some movies.

But, I meant to talk about Happy Death Day. And Groundhog Day. And, how you can be a better person by watching movies, or some argument I've made many times in this blog.

1) it still seems like--and this one definitely involves SPOILERS--Tree's mother should be one of Tombs' victims, for that extra personal connection, and Tree proclaiming after seeing the news report about him, "He's been here the whole time." But, alas, even trying to make that connection upon seeing the film a second time, I couldn't. They show Tree's mother for maybe 2 seconds of screen time when Tree watches an old video on her phone. And the news report's box with the victims' faces is on screen for even less time. It feels like an earlier cut of the film made an explicit connection there, but then a new editor got involved or the distributor wanted a tighter edit, and they really needed the screentime for Tree's naked slow-mo walk, even though you don't even see anything.

2) I really wish I'd paid even better attention to Carter's dorm room walls. His side of the room has a bunch of movie posters. Notably, three right above the bed where Tree wakes up 19 times are They Live, Back to the Future, and Repo Man. That's aliens disguised the rich and powerful, with subliminal messages on billboards and tv broadcasts to keep the people in line, to make them good, mindless consumers; that's the classic tale of a young man who travels back in time, has his mother fall in love with him, and has to reconfigure his parents' relationship to ensure his own existence; that's the story of a stock boy who takes a simple job and ends up getting involved in a low key alien invasion. The world not being what it seems. Time travel. And a mundane life turning into supernatural chaos. It would be a little too -on-the-nose except a) the film never really focuses on those posters, plus b) the biggest one, the Back to the Future one is not the obvious poster everyone knows, but MONDO's poster that accompanied the trilogy score on vinyl being released for "future day" (i.e. 10/21/2015, the day they travel to in Back to the Future 2). 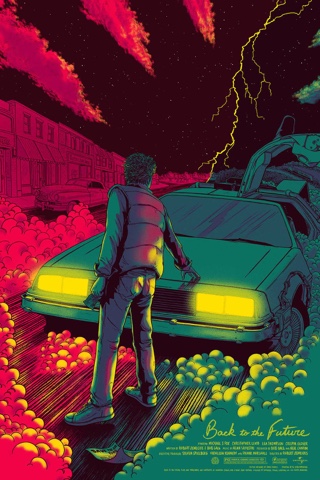 And the film works.

Marshall is pretty good, too. But there aren't many surprises there. It's a biopic about Thurgood Marshall focused on a single court case--State of Connecticut v Joseph Spell. Some good performances, interesting characters, even an interesting case. But it's missing... something. It was nice to pair a good civil rights drama with a sort of feminist, sort of something else, one like Professor Marston and the Wonder Women. Great performances, and the story is an unconventional one about an unconventional... household, and the origins of Wonder Woman. With a bit of kink, threesomes...

And, I'd still rather talk about Hollywood cynicism and Happy Death Day and Groundhog Day because we all need to be better than we are.