At one point in High Fidelity, Rob says "that what really matters is what you like, not what you are like." On the one hand, I think it's both. On the other hand, yeah, I regularly measure people based on what they like.

Do they like the same movies as me? (So many.) Do they watch the same TV shows as me? (Again, so many. The highbrow HBO or Netflix originals and the nerd-friendly CW shows. And, I totally understand if you don't like Banshee because a) you haven't even heard of it or, b) you can't handle the brutality of the violence.) Listen to the same music?

(Actually, music isn't such a big deal for me. I'm not a one-type-of-music person, though I do obsess about one type at any given time, for sure. I don't need someone else to like what I like, though if you've got a thing for musicals and the occasional heavy metal, the occasional folk rock, we might get along.)

(Again, not the most important thing. I mean, I absolutely loved Mark Danielewski's House of Leaves, mostly for what Danielewski's did with the format than because it's the greatest story ever told. It's story is actually pretty basic. Thing is, I don't need someone else to love that book. Hell, since I've never been the fastest of readers, I wouldn't want to have to read a book for someone else so I shouldn't ask someone to read a book for me. For the record, a few of my favorites are The Poisonwood Bible, Replay, I Know This Much Is True, Speaker for the Dead, Lolita, Into the Great Wide Open, My Ishmael, Animal Farm and A Language Older then Words. (That last one isn't a novel, by the way.))

The same comic books? Hell, do they read comic books at all? I don't read a lot of them anymore, but I used to. Had a weekly pull list at my regular comic book store and everything. These days, I only read a few, and I read them on my phone.

(For the record, some of my favorites have been Sandman, Preacher, the MAX run of The Punisher, Strangers in Paradise, Stray Bullets, Concrete, Moonshadow, Daytripper, The Invisibles, Watchmen, From Hell, The Maxx... Actually, I've been rereading that one on my phone as it becomes available one issue at a time. I also read Saga, Ms. Marvel and Darth Vader, and I try out other stuff from time to time.)

Same with book books, actually. Novels, I mean. In recent going-to-college years, I haven't had much time for novels and a few of the ones I've read, like the A Song of Ice and Fire series, were ebooks.

(This week, I've not had time to get to an entire book written about High Fidelity, by the way way. I mean, I read the novel before the movie came out in 2000, but the book--Narcissism in High Fidelity--it's on google books and I've got it bookmarked but haven't had time to really look at it. Been working on my thesis every day, looking to have a draft done this week.)

Does she like to play games? Is he into politics and all the latest controversial bullshit debates that are blowing up on social media? Is he into communication stuff or grad school? How about forensics? Or whatever the hell else I'm interested in. Like I'm looking for an extension of myself in another person, a friend, a lover, whatever. But, it is supposed to be like that? Or is it about finding someone whose interests complement mine? Outside of movies, that would be cool, I suppose. 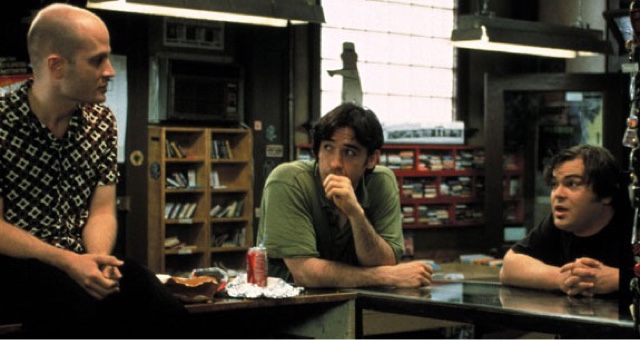 I think I need someone--a friend if not a romantic interest--who sees movies often, who is interested in the Oscars, interested in the good movies and the fun movies. Like today, I saw The Huntsman: Winter's War, mostly because it was the only movie at the local theater I hadn't seen (of the ones I might see) and I wanted to get away from the computer after finishing another chapter of my thesis. I didn't expect a great film, I knew it would look nice, like its predecessor, nice costumes, nice CGI and a nice fantasy adventure plot, generic but fun. And, that was exactly what I got. I need someone who would want to watch that, or a bad horror film (and maybe livetweet about it), and who would go to Arclight in Hollywood with me to see the limited release Oscar hopeful, or who would head across LA to catch the last few Oscar-nominated films. I imagine doing that stuff and not being alone and... It makes me sad, actually. That I don't have that. When we were together, my wife went for some of that but not all of it.

I mean, if a person doesn't like my favorite movie, that's important. I mean, why not? What's wrong with Eternal Sunshine of the Spotless Mind, you unfeeling jerk? What's wrong with Zero Effect, or better yet why haven't you seen it, you heathen? What's wrong with Kiss Kiss Bang Bang? Or Hedwig and the Angry Inch. Or The Grey, Drive, Fight Club, Ex Machina... Groundhog Day...