i'm not even supposed to be here today 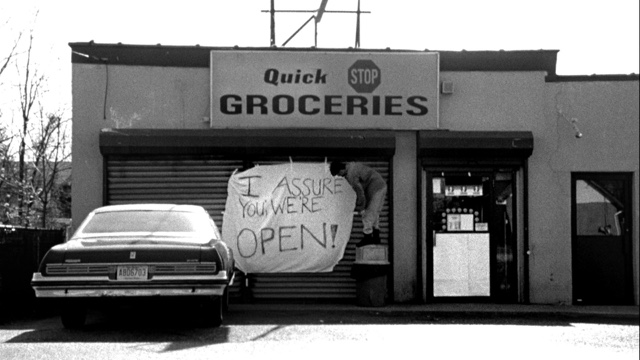 Kevin Smith supposedly got into filmmaking because of Slacker. Jason Reitman (maybe I'll watch one of his movies next) supposedly got into filmmaking because of this movie, even though his father directed Ghostbusters and Stripes and Meatballs... Well, I guess he's a bit young to remember his father making that last one. It could be interesting to map influences like that, track backward from some first-time director to the dawn of cinema.

And, I'm sitting here watching a movie and blogging about it. A year ago, I didn't really think I'd still be doing this. Same thing two years ago. Three years ago, blogging daily about Groundhog Day was just a silly idea I had once, not something I thought I'd actually do. I was in the teaching credential program that winter and spring quarters; thinking of turning my bachelor's in history into a teaching gig.

Slide back another six years, and I'm getting my first inkling of being a teacher. I've just gone back to school after dropping out fourteen years before that. (Like Veronica wants Dante to go back to school.) I'm good at it this time--school, I mean. Right out of high school, I wasn't ready for college. In fact, that helps me forgive my freshman students now when they don't put in the effort. I know when I was their age, I wasn't trying much harder than them. (There are, of course, good students who do put in the effort, but the bad ones are so much more memorable.)

(It was while I was in college the first time that Clerks was in theaters. Saw it Sunday morning, opening weekend... But looking at Box Office Mojo, I'm not sure if that was the actual opening weekend with the movie just on two screens or two weeks later when it had 29.)

Slide back a few years and I'm in high school, private school, and I know I'm expected to go to college after but I'm not sure I really cared.

(I remember reading the review in the Los Angeles Times then getting to the movie as soon as possible, but two screens? While there's a small chance that could include one of the old single-screen theaters in Pasadena--the Colorado or the Esquire--I think I saw the movie at the underground...

And, suddenly, I'm thinking about movie theaters, thinking about how I worked at one the year after Clerks. And, I'm imagining a movie like this about we usher folk who work the multiplex. Plenty of room for interesting stories even if you just focus in on a single day, or a single shift, like Clerks does. Security running people out, an usher helping kids sneak into the R-rated horror film, an usher and a refreshment counter girl having sex in the locker room upstairs by the projectors... I remember the fellow usher who dreamed of getting into filmmaking by way of being an editor, and getting to be an editor by sleeping with another editor first. I remember the fellow usher who had just gotten out of jail and this job, as basic as it was, was all he had and he was desperate to hold onto it. Or the new manager who tried to throw his weight around by yelling at us for not having a theater clean literally seconds after the credits ended and the lights came up. Plenty of room for some scripted subplots woven around those minimum-wage workers, mostly teenagers or 20-somethings who couldn't get much that was better.)

Slide back another few years and I'm already really into movies. I beg my father to take me to a movie at the new theater in Old Town when it opens. (That movies was Heartbreak Ridge.) Another handful of years earlier, I'm watching Raiders of the Lost Ark and my mother tries to cover my eyes when that musclebound bald Nazi is going to get his face in a propeller. She fails, the movie doesn't show me anything that interesting right then anyway, and she doesn't even try to cover my eyes later when people's faces are melting.

Still, on some level, that kid is the same guy sitting here writing about movies every day. Also, far from it, having been through years of school, years of work, then more school and more work, and thousands of movies... Each day a slightly different version of the same person. And, like Dante, I push fucking buttons. Much better than a monkey, though.