much more powerful and useful than an actual event

Right away, in Slacker, the theme and structure is laid out by none other than director Linklater himself, talking to a taxi driver. Alternate realities, each choice you make fracturing reality so that every direction exists. This movie is about to drift off on tangents from each scene--

(I wrote in this blog before--I don't remember when but I think it was fairly recently--about having a story idea that follows one character for a while then switches to another, then later to another, then another and another, etcetera. For the record, I have never seen Slacker until tonight. But, Slacker seems to be doing just that sort of thing.)

--with no overarching plot to tie them together, just a lot of fringe-of-society type characters going about their business.

(I imagine you could operate a story like this on different levels of reality as well, like Mr. Show with Bob and David used to link its sketches or how Cloud Atlas ties its stories together. One character watches a TV show so we drift into that TV show, in that TV show, characters go to see a play, and that play becomes reality, and one character starts reading a book and we venture into that book, and so on.)

What this movie doesn't offer up, then, is resolution. We don't know what happened to the guy from the taxi cab, or what happened to the woman who was hit by the car, or what happened to the guy who got arrested. We get pieces of stories, pieces of lives... But, then again, isn't that what any movie is going to be? I mean, just because a particular story gets an hour and a half instead of a few minutes doesn't (necessarily) mean it is more complete. Even in a story the offers up a character from birth to death--The World According to Garp for example--there are still elements missing, the affect one life has on those around it, the generation that came before, the legacy that remains after. No one story can ever be complete. Each one is finite. 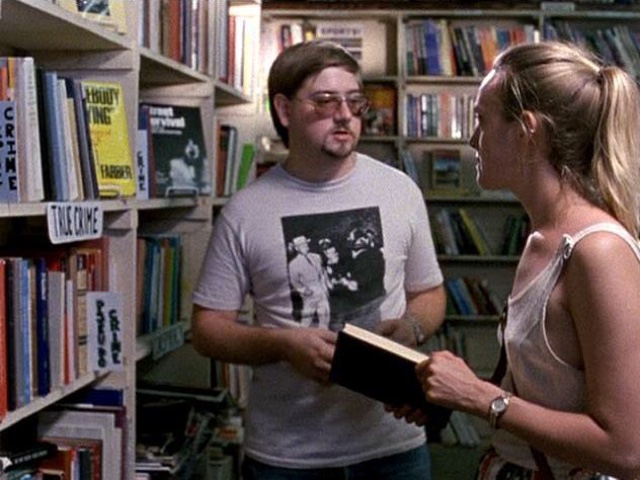 Yet each one can also overflow its boundaries. Each one, no matter how finite, can encompass a larger reality within its borders, trap a whole life inside a handful of moments, a forever within the numbered days, each story like a hologram, one piece of the larger universe but look at it from the right angle and you can see the rest of the universe inside it.