no bearing on the world around us

Taxi guy gets sees a woman hit by a car, takes the time to set down his stuff before he casually checks on her. Jogging Lady says they should call the police but makes no effort to do so. Taxi guy casually steals hit-and-run victim's purse and walks away. New guy drives up and, when it seems like he isn't needed, hits on Jogging Lady as the camera drifts down the street, eventually happening upon the driver who just hit that woman, his mother, as he arrives home and goes inside to light some candles at an altar of some sort and then (possibly even more evil than running down his own mother with a car or performing satanic rituals) cuts photos out of a book. He arbitrarily sets a filmstrip to running as the police arrive and we're left wondering, what are we watching? And, is that filmstrip of his mother pushing him in his toy car? Is this poetry? Is that image supposed to rhyme with him hitting her with his car?

But then we wander off with a passerby, whose on his way to do some busking, then a woman who gives him some change, then...

See, that's the thing. Slacker barely lingers on most of its characters, and when it does its for rants about conspiracy theories and/or the human condition. Conspiracy theories, of course, suggest connections between people that are not immediately evident. So does this film. 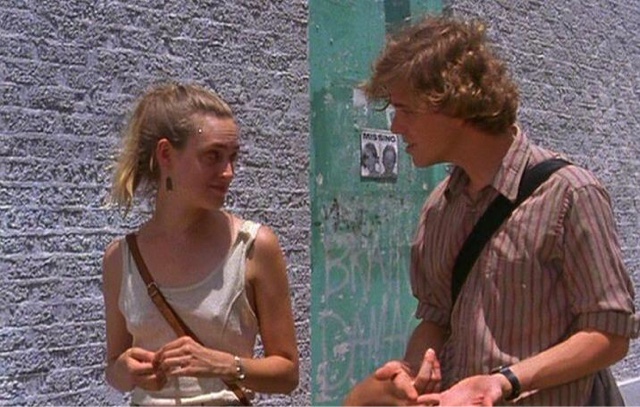 Taking in Taxi Guy's rant about alternate realities, I hear this guy talking about NASA conspiracies and I imagine that the spaceship Aldrin saw across that crater on the moon was just another Apollo 11, two realities sitting side by side, vibrating at the same frequency for just a moment.

Sometimes we vibrate at the same frequencies and we get along great, enjoy the same activities, the same food, the same movies, the same books, the same politics. Other times, we're just not vibrating right and we might as well be on different planets, in different realities, that whole Men Are Mars, Women Are from Venus thing, except not just along gendered lines. More like the Book of Mormon thing, each one of us with our own planet, each of us with our own society, our own culture, our own religion, our own hobby and favorite food and favorite colour and whatever else you can favor. Like we could never possibly understand one another, no matter how hard we try.

Still, you gotta try. Gotta try because of those moments when we vibrate together and everything makes sense, you make a friend, you fall in love, you connect with another human being and the edges between us blur a little.

Oh, for those moments and those blurred edges. The best moments of our lives.