Rob Gordon lives in Apartment 2B. I don't know if that's from the book--I can't be bothered to check--or if it's even on purpose. But, I noticed it and noticeable things matter. Echoes of "to be or not to be" or maybe I'm reaching. But, in a story about a guy trying to figure out who he is, it makes sense. A corny, on-the-nose sort of sense.

And then there's the deus ex machina of Laura's dad dying, without even the setup of him being sick. (The script tries to cheat by mentioning that her dad never knew she and Rob broke up because he "wasn't up to it.") Kinda ruins the movie the more I watch it. I mean, it was a lame bit of plotting in the first place. But, it gets more offensive with each viewing. But, I keep viewing anyway, because...

(And, really, he just compared Charlie to 'Nam? That's gotta be offensive to someone.) 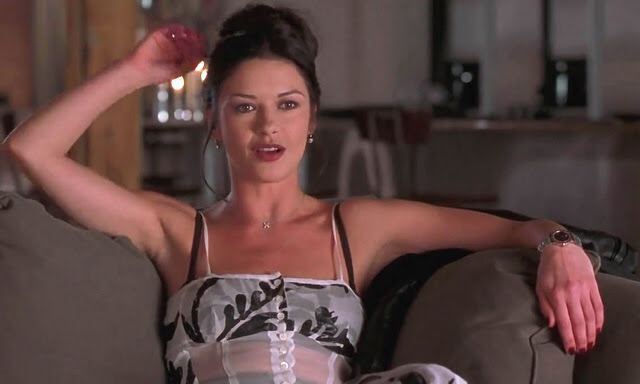 Seriously, what is Rob's problem? You don't own every woman who's kissed you. Sex isn't some permanent body modification that means you're one indivisible beast with two bodies. But, we're stuck with him for the length of the film. He's the protagonist so we have to listen to him make excuses for being an asshole. And, he takes his damn time doing the Phil Connors thing, bettering himself. Hell, given the whole thing with the reporter and making her a tape, Rob is still just Rob a little too damn close to the end of the movie. But, then, he's got that big speech. He and Laura are already back together, and he tells her,

That other girl, or other women, whatever--

And, I've got to interrupt him already, because that distinction between girl and woman is important when you're a misogynist. But, let's let Rob keep talking.

I mean, I was thinking that they're just fantasies. You know? And they always seem really great because there's never any problems. And if there are, they're cute problems like, you know, we bought each other the same Christmas present--

Seriously, he's fantasizing about what Christmas presents he and this hypothetical other woman are buying each other, but this speech is supposed to make up for that? Rob continues:

--or she wants to go see a movie that I've already seen, you know?--

Unless it sucks, see it again, you daft fool. And, if it sucks, want her anyway or, given the thing about interests the other day, move the fuck on. Don't offer the situation up to your current girlfriend who only took you back because she was too exhausted by life to not. Rob continues:

And then I come home, and you and I have real problems... and you don't even want to see the movie I want to see, period.

On this one, I'm leaning toward Rob's side of things. Rob continues:

And, Laura interrupts to insist she's got lingerie, because that's the detail that matters here. Not that Rob is fantasizing about Christmas gifts and movie outings with other women, no. Rob continues:

Yes, you do. You have great lingerie, but you also have the cotton underwear that's been washed a thousand times, and it's hanging on the thing and--

Gotta interrupt one more time before Rob starts digging himself out of his hole. And, to point out that in the flashback in which Rob and Laura are listening to Ian having sex with someone upstairs, Laura is reading Love Thy Neighbor by Peter Maass. That would be a bit too on-the-nose if it weren't actually a book about war. Instead, it's just on-the-nose. Rob's complaining about underwear, as if his is so great. This is more of the same patriarchal bullshit that comprises so much of Rob's problems--he expects women to be these perfect objects, wear the perfect clothes, especially the perfect underwear, and give up their bodies for sex anytime he wants it. Like women's bodies only matter when they're wrapped up in finery, presented like a gift to man. But, let's let Rob do some digging.

--and they have it too! It's just that I don't have to see it because it's not in the fantasy.

Pretty good. Almost as if he has realized that women might be humans beings even when he isn't making them mix tapes or talking them into bed (and I'm not sure those two actions are too far removed from one another for Rob). Rob continues:

Do you understand? I'm tired of the fantasy--

Cusack really sells that tired line. Of course, it's a short trip from the mopey, angry, whiny bastard he's been through most of the film to a guy exhausted by his own horribleness. He continues:

--because it doesn't really exist. And there are never really any surprises, and it never really...

To sleep, perchance to dream, anyone? Rob's piéce de résistance:

But, I don't ever seem to get tired of you.

That's good. That's the kind of line that will get Laura right back into your bed, again. Except, the movie (and presumably Hornby's novel, but who remembers?) is careful to have already reunited Rob and Laura by the power of dead dad ex machina.

Rob's undiscovered country may be women with lives and interests of their own, but I think he'd rather just talk about country matters if it weren't so damn exhausting.