what's the name of your label?

"Nothing of me is original. I am the combined effort of everyone I've ever known." - Chuck Palahniuk, Invisible Monsters

Today I mostly finished a draft of my thesis. Gotta add a couple things tomorrow, check some formatting, then hand it off to my committee for comments. Officially, I turn it in in two weeks. Defend it a couple weeks after that. 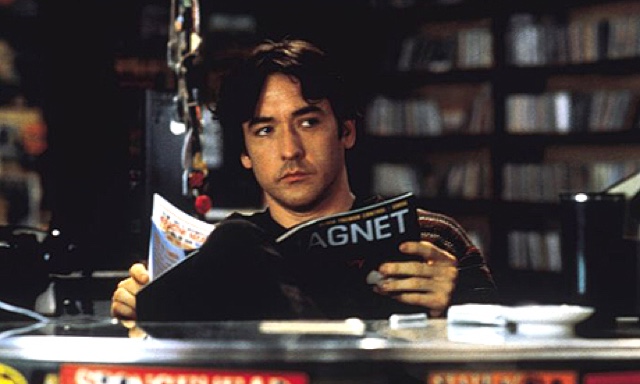 So, today, I was writing about how a blogger can deliberately manipulate their public identity, become the words. High Fidelity, which is really just a placeholder as I get to tomorrow--Day 1000 as well as the end of the main part of my thesis writing. It's a big day.

I imagine my world without this blog and me not being a blogger. I think about labels. Online, I can label myself whatever I would like to label myself. I can play the information game and control what you know about me. I can do my research to talk about a film thoroughly, make myself look like I know what I'm talking about even when I don't. And, when I'm going out on a limb with some strange interpretation, I don't seem so crazy because, damn it, I've written hundreds of blogs, averaging well over a thousand words each, about movies. Whether I knew something about movies when I began, it's hard to argue that I don't know something about them now, even if just from watching them again and again and again.

Seriously, watch any movie enough times and you will understand something about movies, about what they mean, about how they're made, about the choices actors make, the choices directors make, the choices cinematographers make, the choices screenwriters make, the choices makeup people, costumers, set designers, whoever make. It becomes a language for you even if you don't know the "proper" terminology that, say, film students use. For example, pick any of Roger Ebert's reviews and you're more likely to see a down home story about his childhood going to see movies than some technical terms about filmmaking. It's about what movies mean, how they feel. The technical stuff matters, but only inasmuch as it helps the meaning be conveyed.

Skip past the obvious movies like Hedwig or Into the Wild, how about Home Alone? A coming-of-age story that ends on the note that a caring mother is still a damn good thing to have in your life, even if you can fend off a couple of thieves and not get caught... well, home alone.

Or The Legend of Billie Jean--all about growing up and finding your voice, and using the voice to improve the world.

Or Mad Max: Fury Road, and I mean Max's side of the story--he doesn't get involved because it's the right thing to do. He gets involved because in a mad world having a cause means you're alive. Cause individuates.

Go back to February, my Six Degrees of Kevin Bacon month, and you'll see movies that have no reason to be near each other bumping up into this... thing, this idea that every movie is every other movie and they're all just about us. If nothing else, their existence tells us something about us because we are the audience.

Pet topics like gender roles or race or how you fucking get your shit together and figure out how to be. These all roll together and roll together and the blog becomes the same resumption as the time loop in Groundhog Day. Rob Gordon is forever obsessing about his top five breakups. Hedwig Robinson is always singing about the origin of love. Kevin McCallister is always being left alone. Joel Barish and Clementine Kruczynski are always erasing each other and starting again. Phil Connors is always learning to play the piano. It's all on this constant repeat in my head and here in the hyperlinks at the side of this blog.

Today's reason to repeat a day forever: no reason but to give every damn imaginable thing a try. Twice.