in ways we never could have imagined

The remarkable thing about Lars and the Real Girl is how easily it allows the audience to understand its characters. The damaged, the desperate, the concerned--they are all painted with such care. We can relate immediately to Lars (Ryan Gosling), to his concerned (and pregnant) sister-in-law. Karin (Emily Mortimer), to his interested coworker Margo (Kelli Garner). Even his brother Gus (Paul Schneider), though he doesn't have much to do but play support to Karin early on. And Dagmar (Patricia Clarkson, thankfully given better material than Pieces of April). It's like I've said regarding Linklater's films; they embody these character seemingly effortlessly.

Yet, the plot makes a very explicit effort to complicate things beyond understanding (and fails, as it turns out). Bianca (the doll) is a missionary, very religious, and she barely speaks English, plus she's in a wheelchair, plenty of detail to explain why she doesn't talk much. That and her shyness. Gosling totally sells the performance, though. 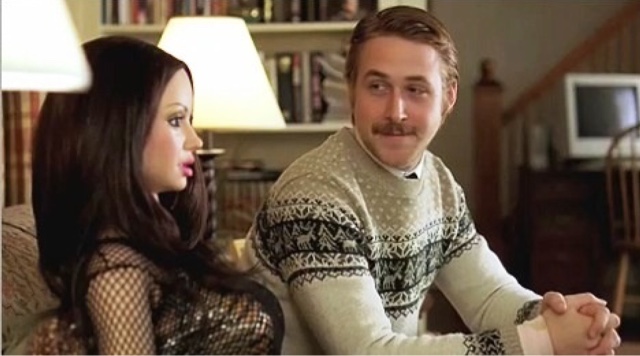 It's like something like The Iron Giant or even King Kong, take a story of something explicitly not human to tell the most human of stories. This isn't a story about Lars and a doll. Bianca is not the titular "real girl," rather Margo is.

(Mrs. Gruber (Nancy Beatty) is awesome, and real. She accepts Bianca readily because people are strange, they do strange things, Lars' strangeness is not (necessarily) above and beyond.)

So many of us imagine so many things. Where else do we get out religion or our politics? Where else do we come up with dreams about who we're going to be in the future? We might be better off if we could imagine as Lars does well into our adulthood because maybe we'd be more hopeful. I mean, remember when you were a kid and your toys talked. To each other. To you. And it wasn't weird. That's what toys were supposed to do. Adult toys, inevitably are about sex (as Bianca is supposed to be but isn't) or about staying in their packages to be displayed on a shelf (nerd stereotype). We could probably all use more play time... And, I don't mean the kind of play time plenty of Americans go for but something more imagination-based. It may seem hypocritical from the guy who watches movies everyday, but we are a bit too willing to let others dictate the way we imagine the world.

Meanwhile, parts of this movie are in line with Punch-Drunk Love--less about us enjoying the film and more about relating to it, understanding it, appreciating it. Lars is like Barry if he were not prone to violence.

Gus' notion of what it takes to be an adult intrigues me. Her tells Lars:

...like, you don't Cheat on your woman, and you take care of your family, you know, adn you admit when you're wrong, or you try to, anyways. That's all I can think of, you know. It sounds like it's easy and for some reason it's not.

It shouldn't be easy.

But, it's worth the effort.