never give anyone the power

In the mood for some poetry after judging poetry semifinals at the end of today's tournament day. first poetry movie that came to mind was Slam (I couldn't remember if Total Eclipse really includes much poetry and I swear The Basketball Diaries includes almost none, and I've already watched Dead Poets Society for this blog) so I'm watching Slam, even though I remember liking the move but being underwhelmed by the poetry.

(I suppose I could have finally watched Howl but I didn't feel like something new tonight; didn't even get back to the hotel until almost eleven. That's how Nationals goes. Early starts and late ends to the days, three hard days then you're out.)

The movie is filmed like it's a documentary, and I think it's covering a lot of the same themes as the documentary SlamNation. It's talking about how black Americans ends up disproportionately in prison, and how readily so. Ray (Saul Williams) ends up in jail because his lawyer basically tells him to take a plea rather than try any sort of defense. Once Ray is in jail, a guard gives him a speech about how many young black men are in DC, how many are in jail, and you get a sense of a fucked up system, but just a sense. The movie doesn't dwell on it. Instead we follow Ray and his scope on the situation is narrow, so our scope is narrow. A gang leader hands him a copy of Civil Disobedience (and, to nitpick, Ray misquotes a line from it when the movie plays like he's reading directly) and there's an implication of something big, like Letters from a Birmingham Jail-big, but instead, it's prison movie with requisite gang violence (for longer than I remembered, actually; almost half way through. the movie and Ray's still in prison), then some poetry and romance--the romance is going to get short shrift, for sure, as Lauren (Sonja Sohn) hasn't even been introduced yet.

Ray refuses to join the gang fight, and instead starts reciting poetry in the prison yard. A crowd gathers, and it seems more likely they think him crazy than amazing (though minutes later the gang leader Hopha (Bonz Malone) is speaking, inspired, about how he isn't coming back to jail). And there's Lauren, finally. Writing teacher at the jail. And, that program has been cut. 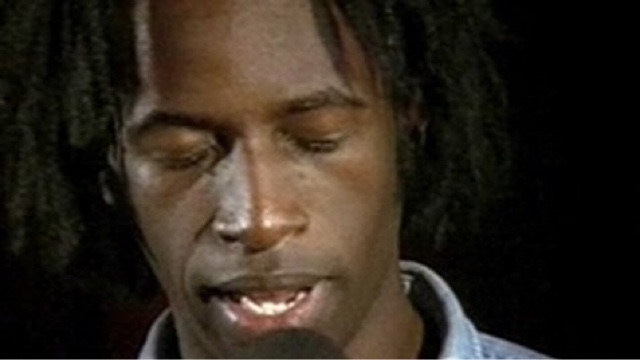 (I'm wondering as I sit here watching this movie, just how many forensics competitors used this movie for interp back in 1998-1999. Even some of the dialogue plays like poetry--though, by the rules, anything from this movie would count as drama, not poetry.)

The crux of the second half of this film is the weekend before Ray has to appear in court. Out on bail (paid by Hopha), Ray gets together with Lauren, they fight because she thinks he should own up to who he was and go to prison, to be free there. He wants to run because he doesn't feel guilty. He performs a new poem on stage, he walks to the Washington Monument, and the movies leaves things open-ended...