let me give you a hand with the heavy stuff

I do want to talk about the message I got from Danny Rubin yesterday, but I'm not going to, because that's private. One of the critiques of autoethnography--an approach I'm using and quite readily defending in my master's thesis--is that you can never get consent from everybody involved in some story, some research, and while technically that just isn't true, certainly it might be hard to get consent for everything, from everyone, and some people may refuse. That doesn't mean you don't mean forward. That doesn't mean you leave out--and I'm just going to jump right into serious stuff here--truth just because it involves someone else. You leave out that person as best you can, but you don't just silence your own voice because someone wants to silence theirs. And, sometimes, you just don't ask-- No, I don't mean you just tell the story, damn the consequences. I mean, you tell your side and don't ask for the other person's because it would be wrong, would be uncomfortable, would be painful... Or maybe just doesn't matter if you want to tell your story. For example, I talk about my marriage ending from time to time in this blog, but I try to treat it more as my experience of the separation, my experience of the divorce, or I generalize about separations, generally, or divorces, generally. I don't try to tell my wife's story. I don't try to tell my kids' stories.

(A brief interruption, violating my first sentence above: I don't actually remember ever writing about how the truck stuck in the road because of the blizzard is labeled AMERICA. I could probably make a good politically-themed entry out of that.) I am surprised I have not done that yet. Or I am surprised that I have forgotten doing it. One of those.)

Or yesterday, I referenced the seniors from our team, but I tried to tell my story, invoking theirs maybe, commemorating theirs, by remembering my own.

(And, I have to interrupt again because I just love to discover new things about my Groundhog Day. I mean, it's not like I didn't notice there was something on the sink here, before-- 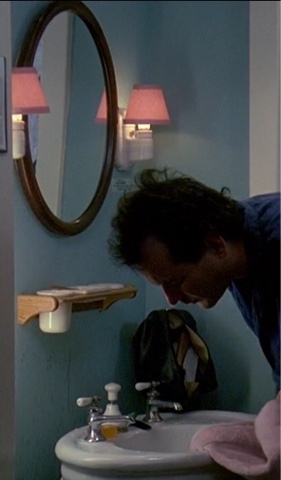 --but I never really looked at it. My TV at home is 720p. The hotel TV is 1080p. Even on the blu-ray, I was still limited to 720p at home. There was more crispness than with the DVD but still not the same amount of detail as right now, here in Gainesville. And, look at that thing. Maybe it's just Phil's toiletry bag or something, but at that particular moment, as Phil is straightening back up after throwing water in his face (on Day 2, for the record), it looks like there's a person in it, like it's some sort of sculpture maybe. If it is some small sculpture, there is room for a discussion of homunculi, and that would be an interesting subject to research.)

I don't want to talk about how Groundhog Day got me out of an emotional rut and helped me get some structure around my life. I certainly don't want to talk about how I was thinking about Groundhog Day earlier today and imagining the book I want to write after my thesis is complete--for those of you who are new 1) yes, I still watch Groundhog Day once a month (and when I noticed it was on cable recently, my daughter told me not to watch it, that I should wait for my scheduled viewing. On the plan to Florida, it was the middle of the night and I wanted to sleep because I had to drive from Orlando to Gainesville when we arrived, but

(I will interrupt this political angle to point out something that I don't think I have noticed before. The side of Punxsutawney Phil's cage says "Traveling Forecast." I suppose that wasn't very clear before... Or I just never looked.)

Scratch that. I can write it. I can take material from this blog, especially the first year, and material from my thesis, and maybe wrap it up in a narrative about my visit to Woodstock, like the recent entry (but combined with all those entries from during and after the actual visit). And, you will be better off for having read it. I'd guarantee it, but I do not want to be that self-helpy.