finding the tangents within the framework

I was going to watch Hackers again but apparently my rental was only 24 hours, not 48 as most Amazon rentals have been. Anyway, I'm inclined to write in response to Everybody Wants Some!! instead, anyway, except for this:

You bet your ass we're all alike... we've been spoon-fed baby food at school when we hungered for steak... the bits of meat that you did let slip were pre-chewed and tasteless. We've been dominated by sadists, or ignored by the apathetic. The few that had something to teach found us willing pupils, but those few are like drops of water in the desert.

That's part of "The Conscience of a Hacker" aka "The Hacker Manifesto." An FBI guy reads a few lines from that in Hackers and it still works for what I wanted to say in regards to Everybody Wants Some!! It's one of the arguments central to my master's thesis--be whoever the fuck you want to be (as long is it doesn't hurt anyone) and live your damn life. 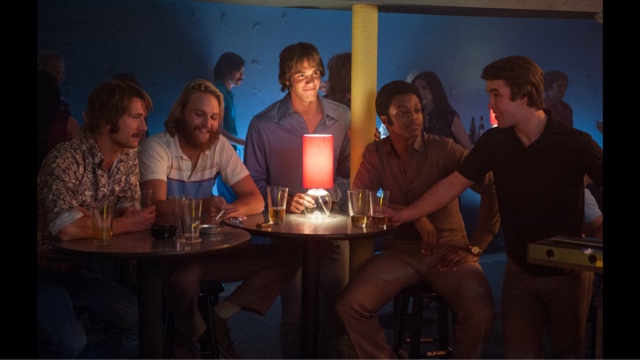 Everybody Wants Some!! is thematically, Richard Linklater's followup to Dazed and Confused. End of summer, 1980, the weekend before college classes start, and we mostly follow a group of baseball players--in fact, main character Jake (Blake Jenner) is a fair successor to Dazed and Confused's Pink (Jason London). The usual drinking and smoking and sex. And, a whole lot of Linklater's staple effortless characterization and storytelling. But, what's interesting in Everybody Wants Som!!, what makes it stand apart from Dazed and Confused is the parties. Where Dazed and Confused covers just the one day, culminating in that one big party, Everybody Wants Some!! involves four days and four nights of partying. Four different nights. And, this is not SPOILER territory because the trailer already mentions this stuff with Jake's line about having an identity crisis. The main characters dance the first night at a disco club, the next at a country bar, the third at a punk concert, and finally they attend a party thrown by the dance and theater majors. And, for each one they dress the part (well, not so much for the last one). Like they're trying on different identities. Jake's conversation with Finnegan (Glen Powell), plus a previous conversation about picking a major kinda hang a lampshade on the theme, but that doesn't negate the rest of the film, the way these guys, even when they're making fun of one another, accept each other.

Like the titular Hackers with all their eccentricities; when it comes to the hacking, they kind of want a certain minimum level of skill to be in the club, but recall the scene at that "arcade"--as long as you're on the outs with normal society, you fit right in in that place.

And, I feel like I should be getting angry, ranting about political bullshit, religious freedom and bathroom laws and whatnot, Donald Trump and his anti-foreigner crap. But, really, Everybody Wants Some!! is the kind of movie that puts you in a good mood. The jerk learns to be nicer, the nice guy finds something good in his life, and all ends well.

(Well, except for that one guy.)