no one leaves the house anymore

It's 1995. The internet is still mostly a fantasy. A scary fantasy. We had Lawnmower Man a few years ago. Later this year we'll have Virtuosity and Hackers. Right now, it's July and we've got The Net.

When we meet Angela Bennett (Sandra Bullock, and that name means Blessed Angel; we'll get to that below), she's playing Wolfenstein. Killing a computer virus. She's got a friend who collects them. I had a friend like that in high school. 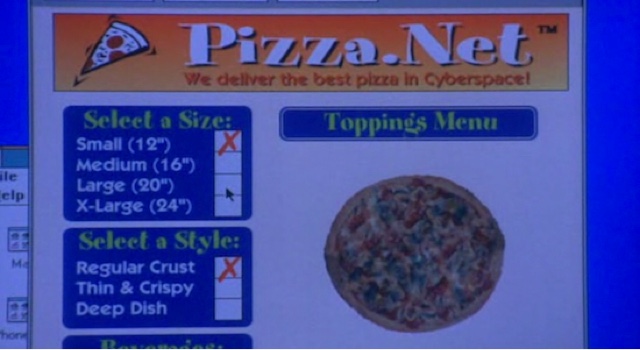 She orders a pizza online--state-of-the-art stuff right there--and "A Whiter Shade of Pale" plays and that's a love song, right? Her and the pizza?

Back up. The movie begins with a politician killing himself at Hains Point in DC. The camera pans up and over The Awakening--

--and I'm wondering if the choice is deliberate, a metaphor for... For the Internet struggling to dig it's way out of the earth into regular use? Humanity (like Angela) struggling to live life while being buried by an increasingly technology-based world?

And, appropriately (I guess) I'm watching the movie on Crackle, so there are commercials. It's like I'm living in the Middle Ages.)

She uses her laptop at the beach. That's just absurd. I mean, I've used my iPad while camping at the beach, but that's different; I had a blog to write.

(And, don't get me started on the lazy character names. Really? She's an angel (even works for Cathedral software) and he's the devil? (Devlin may also be a reference to Hitchcock's Notorious.) Can we be more obvious?)

He ordered her drink, he talks about obsessing about other favorite film, he "guesses" where she's from. He "guessed" she was a hacker. Plus, he fits the ideal man description she offered up in Cyber Chat earlier.

At least the movie doesn't take long before it lets us know that Jack is the bad guy.

Love that she can't feel his gun when she hugs him or when she picks up his coat. Filmmakers forgot that guns have weight.)

But the film's plot is problematic. Half an hour into it, Angela doesn't even know there's anything going on, doesn't know there's a mystery to be solved. And, we're not the far ahead of her in the audience; we know Jack wants to kill her and he wanted that disk she got in the mail.

And finally, she learns what he's doing. Still has no clue as to why, of course. Well a clue: she found the floppy disk.

The plot after that first act is that of a pretty straightforward thriller. The Internet stuff is just a veneer to make the story seem new when it's really a fairly basic setup--innocent person framed... like The Fugitive for the internet age, an elaboration on modern identity theft.

And, watching it, I'm back in 1995. Because of the Internet stuff--I wouldn't really get online regularly for another couple years, but I had been on BBSes as far back as the late 80s. I had been playing shareware games like Wolfenstein for several years. And, I worked in a movie theater where we had The Net playing a few times a day. Waterworld opened the same weekend but that was over at the underground. We had The Net, we had Clueless, we had Species, we had Batman Forever, we may have still had Braveheart (we had that for a long time), and we had The Indian in the Cupboard. I saw the beginning and end of this movie many times.