The question for today is this: how do you measure a film's... Worthiness? Greatness? Must it be objective, or is the subjective as or more important? See, today, I saw Wonder Woman.

(And, right now, I've got Groundhog Day playing because it's the 2nd of the month, but I'm not sure how much I might say about that film tonight. Additionally, I should probably get around to a recap entry sometime soon, but that won't be happening tonight either. Also, I'm starting to have ideas for themes for upcoming months. I think this blog might be here to stay for a while. At least until, say, August 1. That would make it three full years. But anyway, Wonder Woman...)

First, a story from just after the film. See, I'm thinking about stuff I might say in this blog all through the movie, and I'm trying to figure out how to get into the subjective versus objective thing. I mean, there's the obvious (and oft repeated here) bit from Benesh (2011) about how every viewer has their "personal 'edition' of the film" in their heads during and after the viewing. And, I'll probably come to that below. But, I wanted to deal in the divide between objective greatness--

Wonder Woman is certainly the best of recent DC superhero movies, and one of the better superhero movies overall, but I'm not sure I would call it a "great" film. It's good. It's solid filmmaking, some nice performances. Gal Gadot has got serious charisma and owns the screen as much as her character's presence should. But, the plot is pretty standard origin story superhero stuff. The angle where Wonder Woman should have made more of an impact--the feminist angle--actually hits in numerous small ways (and I'll get to them below), but could have hit harder. Of course, that her sex is only incidental except in a few specific instances, might actually be the best way that the film is feminist (but, I'll also get to that below).

--which brings me back to my story. Because, my daughter was supposed to go to see the film with me this morning but couldn't make it at the last minute. So, I couldn't just offer her a guest writing spot or quote her on her opinions about the film. And, I'm walking out of the theater and I see a little girl, maybe at most about 4 years old, running around the lobby dressed in a Wonder Woman costume. And, she's running toward the line of posters along one wall. The Wonder Woman poster is the middle one of five posters. And, I'm thinking, this is the perfect moment to describe. Just extrapolate out from this one little girl to every young girl, every young woman, every adult woman, who might be inspired to be something better, something stronger than what this inherently patriarchal world insists she be. This is the power of a film like Wonder Woman--piss off the chauvinist bastards who can't handle the idea that women might watch a film without them, that female characters might be worth more screentime, that we might enjoy a hero without a penis, and inspire girls to realize they don't need men to complete their lives, they can do great things... And, she runs over to the Despicable Me 3 poster instead of the Wonder Woman one and it's like some sort of twisted poetry because who the fuck am I to assume she is going to see Wonder Woman or that she should? 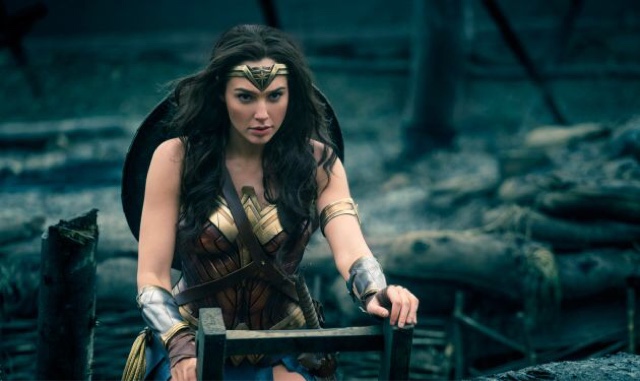 (Sidenote: Why have I never made a specific thing out of the flowery wallpaper all over Phil's room at the Cherry Street Inn? And why did I never return to that UNSELFISHNESS poster in its dining room?)

Honestly, I'm kind of petty about this stuff sometimes. And, I figure if the existence of Wonder Woman pissing off some men, maybe knocks them down a peg or two, regardless of whether or not it lifts up any women, it's done a good thing. Me--I like the hero that Diana is in this film, concerned with the innocent bystanders, concerned with those hurt or enslaved nearby even if the mission is somewhere else. General Ludendorff (Danny Huston) has this line in the film--I forget the exact phrasing but it's something about how men need war to prove who they are. And, that concept seems so fucking antiquated to me, but I know that so many men still operate around something similar. Masculinity means you've got be good in a fight, gotta be able to stand up (and physically fight) for what you want. But, that's so narrow. Or maybe masculinity, or rather "masculinity", just tires me, bores me, disgusts me. I mean, it's not like Diana is trying to avoid violence or anything--she's actively seeking to kill a specific guy through most of the film--but there's a different sense of what war is through her eyes, and through the eyes of the director, Patty Jenkins. Also, however fantastical it may be, the Amazon society is remarkable in that they have basically been training for war for thousands of years but don't seem to have any infighting. One of those subtle jabs at the world of men--the world without them does just fine without war. At first glance, I mistook Robin Wright as Antiope for Linda Hamilton, and I thought that was brilliant casting; after all, Linda Hamilton played one of the definitive feminine heroes of film, the deliberately matriarchal but still absolutely violent Sarah Connor in Terminator 2: Judgment Day. Then, it hit me that it was Robin Wright, and that still worked for me because the new season of House of Cards just showed up on Netflix this week and Wright's Claire Underwood is a powerful woman of a different bent.

The film absolutely puts the onus for war upon men (more broadly mankind, and one of the main villains is a woman, but primarily, the film makes it clear that men drive society to war). And, I'm sure some men in the audience (or who refuse to be in the audience) will be offended by that. (And, as I indicated above, I am glad that some might be offended, and I also hope that some might get the fuck over themselves and realize that the film is spot on regarding this topic.) But, it also offers up a few men who are more stuck in the world of men at war than they are happy to be there. I might also mention here--considering this week's topic here at the Groundhog Day Project with The Magnificent Seven--that at the center of this film you've got an interesting take on what TV Tropes calls the Five-Man Band. Typically, this band is the Leader, the Lancer, the Smart Guy, the Big Guy, and the Chick. The thing is, the way Wonder Woman plays it, Diana is not the Chick. Tim Grierson at Mel Magazine puts it pretty well, as far as how it works between Diana and Steve (Chris Pine): What makes the part [of Steve Trevor] work is Steve's slow realization that he's actually the sidekick in this action movie." Steve is not the Leader but the Lancer. Though, he thinks he's the Leader, at least for a while. The Chief (Eugene Brave Rock) should be the Big Guy of the Five-Man Band, except he's not quite. See, Charlie (Ewen Bremner), while not as physically big, is the dumber one, the comic relief, though he is also the "shell-shocked" one. And, Sameer (Said Taghmaoui) is the Smart Guy. The Chief kind of fills the role of the Chick because he's the one who doesn't want want to be involved. He's near the Front because he can make money selling stuff to the soldiers of both sides. (Though he is pretty quick to get involved once Steve brings Diana to him.) What's particularly interesting, not for what it says about men and women per se but about men and war is that these men would all rather be somewhere else. Steve, least of all, of course--he seems so stuck in his role as spy that he probably couldn't imagine surviving long enough to make a life for himself after the war. But, Charlie likes to sing, Chief would rather just be nearby and make money, and Sameer, as he tells Diana, is an actor, he's "just the wrong color." The individual men don't necessarily choose war. But, get enough men together and conflict is inevitable.

Steve not actually being the hero, though. It's interesting how casually the film reverses common tropes. Diana saves his life more than once. Diana happens upon him in the bath. And, she faces down the big bad, and the bigger bad. Also worth noting: while Ludendorff does have his drug-fueled rages, he is not necessarily a physically imposing figure. Meanwhile, Diana is so fit and confident that she is an imposing figure regardless of her size.

(Though, to be fair, Gal Gadot is 5'10" and her Wonder Woman costume includes some barely disguised heels in her boots... Which actually makes the moment when she staggers after putting on actual high heels rather silly.)

And--MINOR SPOILERS though I will not get specific--the bigger bad until the final fight is almost diminutive in stature. While the destruction of war is on display readily, the specific villains do not (most of the time) play on their masculinity, which is interesting considering the clear link between masculinity and war in the film. Downplaying it in the villains, and having the female villain as well--that links right into the greatest strength of the film:

It never comes right out and says that all men are bad, all women are good. There are implications here and there, maybe a line of dialogue more explicit a time or two. But, the film does not leave you with the sense that only a woman could have done this. Rather, that Diana is a woman just makes it more... I don't know. Naturally befitting the role? Like the Linda Hamilton thing (even if she turned out to be Robin Wright)--the matriarch as fundamentally powerful, woman as fundamentally powerful. I mean, I don't mean to be flippant, but considering the pain women go through on a monthly basis, not to mention the systematic and systemic forces holding them back in so much of what they do--it's a wonder that they don't all train for war and destroy something. The real feminine power, I'd say, is being able to take it and not necessarily dish it out. While men feel the slightest threat and lash out, because our egos are just too damn weak, and we're too damn stupid to realize that taking a hit now and then doesn't mean we've lost.

Something that I think Phil Connors understands after all his resumptions. His impulsiveness, his need to be better than everyone around him--that was a problem. A self-destructive problem. He never moves beyond one liners or insults (plus, there's that whole thing about hugging Ned Ryerson to make him uncomfortable), but he's deliberate in his actions, thoughtful. He's not looking to hurt anyone anymore. That's a good way to be.

Something Diana just knows and understand.

(Of course, she's got superpowers and a destiny and all that, but that's a problem common to far more than just Wonder Woman, and that's a problem with fantasy stories, science fiction stories, mythology in general.)

She's got a headstart. Either from being part god or just from being a woman. Maybe the latter more than the former.