not even close, not even a little bit

Some of the great moments in 10 Things I Hate about You are the more subtle things. Not Kat's overt antisocial behavior or her feminism but Bianca's disinterest in most of what Joey does, even as she's sort of stuck around him when he's near. As my daughter put it today, Bianca cannot be herself around Joey. But--and this is me. again--there are those moments that she's bothered by her own interest. Like when she calls his headshot "pensive" and he says he was going for "thoughtful." In that moment, she's more like her sister, smarter than the girl whose opening line is that shallow bit about liking her Skechers and loving her Prada backpack. Or when he's doing his underwear and swimsuit poses and she's got no more clue than we do what the difference is. 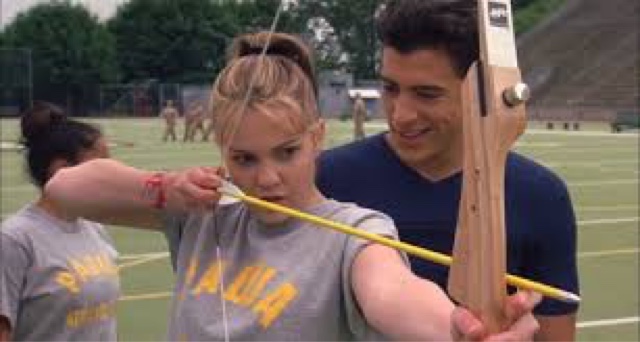 Of course, one of the subtle moments that isn't as good is Bianca's and Joey's reaction to her accidentally shooting Mr. Chapin with a bow and arrow. The subtle non-reaction is amusing, but the arrow bit ruins it for me. It's one of the 90s silly bits that echoes a little bit the likes of an American Pie film (and not the best parts of one of those. Bianca shooting Mr. Chapin is one. Michael crashing down the hill on his bike is another. And Walter (Kat's and Bianca's father) flinging his Chest Expander off into a neighbor's yard. In a different film, with more surreal or non sequitur moments, these would have worked better. And, with teenagers maybe they worked (and work) better than they work on me. But, they just feel like remnants of some other version of the script that someone forgot to edit out.

But those good moments--the Bianca stuff I already mentioned, Patrick's visible but mostly quiet falling for Kat as he watches her, the horrified reaction from Bianca and Chastity when Walter tells Bianca she has to wear the belly, Kat's... Well, actually, part of the problem with Kat is that she doesn't really do much of anything subtly. The film itself doesn't do much subtly either. From the opening juxtaposition of "One Week" and "Bad Reputation" to Michael literally explaining the stereotyped cliques to Cameron, Mr. Morgan’s on-the-nose (but then summarily dismissed) critique of Kat's oppression to Ms. Perky' sun necessary (and ultimately unrelated) sexually-charged writing, this film does not do subtle. It wears its feminism on its (or Kat's) sleeve and it wears its... Not misogyny, but something on the other side of whatever spectrum from feminism.

Yes, I myself have argued in this blog that a character can be feminist and still be into a guy, even be crazy about it, but my point is with 10 Things I Hate about You, Kat's turnaround isn't explored or explained; it just happens. The film has let us see how cute Patrick can be, and we've seen him fall for Kat separate from being paid to go after her. We know he deserves her forgiveness. But, that doesn't mean the film can't give us more than just her poem to go by to let us know she's going to take him back. It's a basic romantic comedy trope played a little too simply. So, then the transition must be carried just by Kat's poem. And, despite Rachael McLennan’s Borrowers and Lenders piece, the poem isn't great as a poem. But, like Heath Ledger sells his enamoration (it's a word) with Kat, and Larisa Oleynik sells Bianca's perplexion (that's a word, too) at her interest in Joey despite his douchiness (also a word), Julia Stiles sells that poem, sells Kat's feelings in that moment. (And, notably, in the first and only take.) And, for most viewers, especially young girls who could use someone like Kat to idealize, the poem makes up for the shortcomings that a movie freak like me might get annoyed by.