I don't know New York. Never been there, though I would love to sometime. But, Frances Ha feels like it is invoking a very specific time and place. This is when Frances is 27. This is New York City. And, the film offers establishing shots of existing locations and also specific addresses in the same typeface as the title of the film.

That's the first one. By this point, we've seen Frances and Sophie in their apartment. We saw it in the opening montage, but the address oops up as they get home from their night in Chinatown (for a party that may or may not have been near somewhere called Dumpling House). This is where the film settles into the apartment a little more. 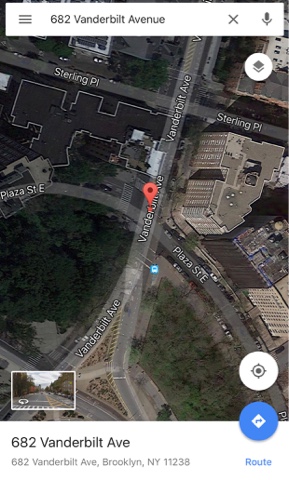 The inclusion of the zip code amuses me. This isn't just Frances' and Sophie's apartment. This is one particular apartment out of all the apartments, unique in this time and place, unique to these tenants. This is where Frances lives. This is where we live. It's universalizing in its specificity. It shouldn't work that way.

Then again, that's part of how this film avoids being preachy. We're watching this story, this time, this place.

Like Frances' line to Sophie: "What about that time that you made that cake?" We don't need an explanation because we're just voyeurs watching these lives. Even Frances' request--"Tell me the story of us"--which could be room for exposition about the past in any other film is instead a moment of characterization; it is about the future, a fantasy, and it is about their friendship and their understanding of what they want, whether it's realistic or not. Frances will get out some exposition later about their time in college, but even then, it's like this is how Frances explains her self, not how the film explains her.

Though there is no title card for it, Sophie's work is framed so we can see its street number (if not its street): 345. Again, specificity. Like the Oliva Restaurant earlier, or referencing the F Train (not a location, exactly, but pretty good for establishing setting).

Frances' bank is BD Bank. No address shown, but the name is in the shot.

But no establishing shot for dinner with Lev. We'll see the outside of the place later (but no signage), but here, we're invited right into the intimacy. Like the opening montage with Frances and Sophie. When Frances runs out to get cash, she runs past M.A. Grocery (now a bagel shop, apparently). And, considering the use of location, it's notable that Lev asks her if she went to Switzerland, because she was gone a long time. She doesn't get it.

Then, she goes to Lev's and Benji's apartment, but we don't get the address yet. Frances references moving to Washington Heights. Benji mentions Noodle Champion.

We don't get the address until Frances has indicated that she might want to move in.

But then we cut to her running down the street again. Less desperation (like when she was running in search of cash) and more joy. She even dances in a crosswalk. ONE REVIEW calls this movie a romantic comedy without romance. And, in a way, that's right. But, there is a romance of sorts, Frances with each location. Her joy here is because she's in a new relationship. 22 Catherine is her new beau, as it were. 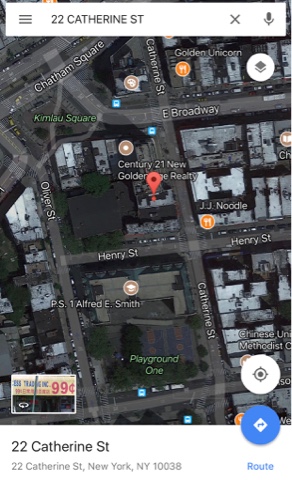 Frances measures here best friendishness with Sophie by Sophie having been to her house three times for Christmas. Location defines the relationship. And, she specifically "can't even get out of the house on [her] feet" but Lev "leaves so easily." And, later, she tells her boss, "I have trouble leaving places."

Frances goes home for Christmas (?). Interestingly, the address pops up before she's there. First we get the airport, a bridge, the state capitol building, then her family's house. The whole. Location is effectively defined by the specific address, though. Frances lives in New York now. This whole place (including a church, a diner, a dentist office, and a street where she rides a bike) is one, singular far off destination.

Then, back in New York, she goes to her dance company friend for a place to stay. They walk through a park. They go to a dinner party. Then To Rachel's apartment. But, on the way there, Frances meets Benji and a date on the street. They're headed to a House Party, except House is the theme, and it's at an apartment. And, we don't see the apartment. Instead, because people at the dinner party mention Paris and Sophie is, it turns out, moving to Japan, Frances runs off to Paris for the weekend. Establishing shot of the entrance of Frances' free apartment there does tell us the street (but I swear I cannot read it on my current screen). No onscreen address. But then, Frances never really settles in. This is like a meaningless one-night stand.

In Paris, she passes the Cafe de Flore. We see the Eiffel Tower because, by Hollywood tradition, that's how you know it's Paris. (Well that or Notre Dame, but mostly Eiffel Tower. And, we also see the Arch de Triumphe in this movie.)

Going with the romantic comedy angle, and Paris being a one-night stand, notice that when Frances talks to Sophie on the phone she doesn't tell her she's in Paris. It's like she's ashamed of being there. And, she tells Sophie she loves her, then hangs up so Sophie doesn't feel obligated to say anything back.

Back to New York. Where Frances has her meeting so see if she'll be part of the touring company. But, her boss offers her an office position instead. Touring means going places, never settling down. The office position would be the opposite.

Then, an interesting one:

That is not a place one can live. Frances has gone back to her college during summer to work. She's living in a dorm, Chuggins (which she later refers to as "the life I never had" because that isn't where she and Sophie lived when going to school there). Room and board to help with events. To "get out of the city." The PO Box, though--that would be where she would get mail. And getting mail, bills and whatnot--that is totally adulting.

Meanwhile, Sophie and Patch have a blog about living in Japan.

Sophie happens to be at the school as well, and they end up sharing the bed in Frances' dorm room.

This isn't just a romantic comedy without romance, though, or it could almost end when they are there in the dark, talking about the future. The movie needs room for more. Frances cannot be left in a dorm room. It can't be that easy for the two of them to get back together.

Frances on a train. Frances walking up stairs. Passing dancers in a hall. Sitting at a desk talking to her boss (the boss from before, so she did take that office job. In the park doing trusts falls by herself, except Sophie is just out of frame. A phone call, vague details. A stage. Frances dances. Though she took the desk job, she's also choreographing her own show. Gotta finish Frances' story, not just the romance...

Plus, her show seems to be all about location and dancers pairing up from far. Away, then separating. We only see glimpses so it's hard to be too specific. What matters is that Lev is there. Benji is there. Rachel is there. Sophie is there (married now). But Benji approaches Frances, and we can imagine they could get together. Still, Frances and Sophie have that moment Frances said she wanted from a relationship earlier.

Then, the new apartment. The number on the building shown is 565 (not 97). Frances try's to put her name on her mailbox--FRANCES HALLADAY--but it won't fit. Frances Ha, apartment 19.