she probably doesn't have any powers

Michelle Lopes at Blumhouse calls The Craft a film that instead of having "feminism [as] a gimme... Internalizes its misogyny like a teenager collapsing around her own angst." But, think about the subjective/objective experience of the film that I was talking about yesterday. Like Lisa Lagace at Marie Claire points out:

[F]or a teenager in 1996 who was unsure of her place in the world, it appealed on a deeply powerful level. The Craft celebrated the unconventional girl. It encouraged teens to shake off the non-stop, crippling fear of not fitting in, and embrace the power of being different. And it hit theaters during a time when cinema just wasn't advocating female outsiderdom.

Nitpick: the very same May weekend that The Craft hit theaters, so did Barb Wire, which wasn't very good but absolutely positioned a woman in a position of power, and I Shot Andy Warhol, not exactly a very positive vision of a woman still centered on one. Of course, then. You also has the romantic comedy The Truth about Cats & Dogs in its second week, and Fear, which is all about a young man preying on a young woman, in its fourth. By the end of the next month, Striptease would be in theaters, and the feminism of that film is certainly up for debate. But, then you'd have Courage under Fire and Harriet the Spy out the same weekend in July, Matilda in August. The First Wives Club almost made the top ten at the box office for the year. Scream wasn't far behind, and it came out in late December. (The year before had Pocahontas in the top ten, Dangerous Minds not far off, Clueless trailing at 32. Dolores Claiborne came out that year, but so did Showgirls.)

If Lagace's memory of mid-90s cinema was that it wasn't advocating female outsiderdom (and, to be fair, my references in that last paragraph were more about female leads, females in power, than "outsiderdom"), then what difference do facts make? What ultimately matters, as to whether a film is feminist or not is who receives it as feminist? The two authors I started with above--they're both female. They experienced the film differently.

(I was going to reference another piece about how the film wasn't feminist--Danielle Mascioli's at Medium, but she doesn't seem to know when the movie came out, references some very unlikely episode recaps on the internet regarding Party of Five and didn't even bother to check how to spell Manon. I don't trust her.

Speaking (parenthetically) of Manon, it is problematic on a more objective level, looking back two decades, that the power these witches seek is male, that they use their powers to be attractive or to dominate over the males. You know, play the patriarchy rather than remove it.

I'm not sure that I have a problem with that. Then again, I have always been a fan of the notion of violent overthrow when the status quo has gone wrong. Additionally, these are teenagers. Given some power, what else are they going to do with it but be victorious in the squabbles they'd be going through anyway--see Heathers, see Jawbreaker, see Mean Girls, see any movie about high school, not just those about his school girls. Take Can't Buy Me Love for example; Ronald gets a little high school power and it goes to his head, too. One writer's dreams of what a witch could do with power doesn't mean that doing anything else is inherently wrong. 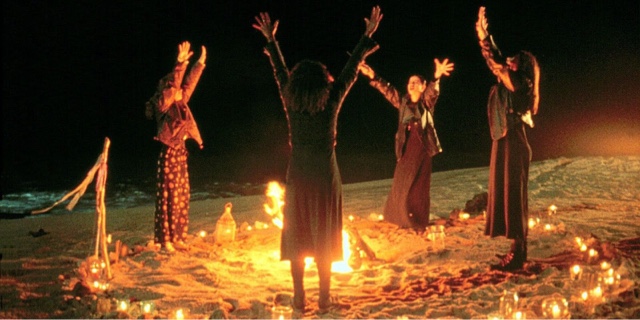 And, coming back to Manon, the film effectively positions his invocation as a bad thing. Invoking the power of this male (deity) leads to the breakdown of their makeshift coven. And, with the dead sea animals washed up on the beach, it has a clear downside right away. The masculine pursuits, the pursuit of being attractive in powerful within the confines of the patriarchal world around them--that is exactly what this film says drives them to their own ruin. The one who... wins is the one who doesn't take such advantage of her new power. (Well, she does but she regrets it.)

Of course, she too needs Manon to win in the end.