Before I move on from Working Girl, there is something I need to say.

I'm pretty sure Katharine is the wronged party in this film. She explains the existence of her note to Jack (which she never actually sends, by the way, which means at worst she only intends to steal Tess' idea, she doesn't ever do it until-- Well, I'll get to that.) as Jack being hesitant to look at a plan from her secretary, which makes sense. Sure, when Tess asks him if he would look at a colleague's idea, he says he would, but a) he doesn't know what she's talking about and might be distracted by the deal about to actually go down, and b) he might have been hesitant before to help Katharine because he just never liked her as much as he likes Tess, so Katharine would actually be telling the truth as she understands it, even if she would turn out to be wrong. 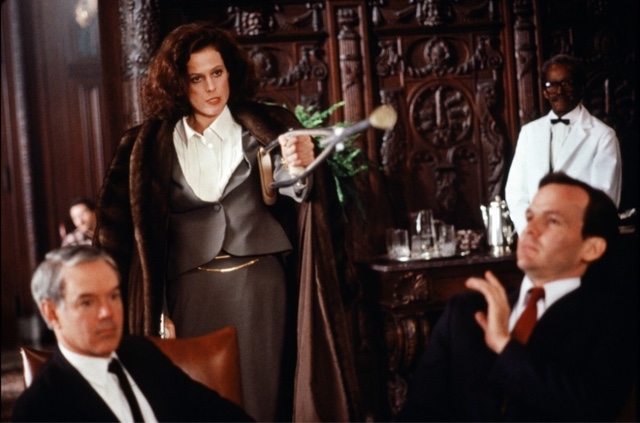 Consider how the film plays the initial interactions between Katharine and Tess. Especially in context of the supposed ethical problems with eyeing deals from an unknown third party. Initially, Katharine is helpful, and she actually listens to Tess. Think of the Dim Sum. Ginny (Nora Dunn) suggests some generic food for Katharine's party, but Katharine chooses Tess' suggestion because it's a good one. The film never shows her claiming that it was her own idea. Just as the film never actually shows her claiming that the Trask radio idea was hers, until, well...

While the film is structured as Tess responding to Katharine's betrayal, I think the final scenes are actually the opposite--Katharine is responding to Tess' betrayal. Tess has stolen her boyfriend (who she thought was about to propose), Tess has stepped above her role as secretary to make a huge deal without her (Katharine). It is only after that that Katharine explicitly makes trouble for Tess. By then, we're stuck with Tess. She's our protagonist. She's the one who's had all the screentime. In some other film, Katharine's revenge is glorious, albeit shortlived, because Katharine's story is a tragic sequel to the likes of Wall Street, a cautionary tale about working in business like this. Katharine has put in her time, made the contacts she has had to make, and then her new secretary in her new city takes advantage of her convalescence. Of course, her revenge would be swift, vicious. And then Trask (Philip Bosco) has the audacity to call her ass bony?

Katharine's movie does not end well.

And it is a harsh lesson in what it means to live in a man's world; except for one minor detail: Katharine is quite specifically younger than Tess, so Trask trading for the older woman actually plays against the usual patriarchal order.