who are you? what can you be?

(A note before this gets perhaps a little philosophical... Was it my sister Brooke who once commented in regards to an early Groundhog Day Project entry that I had a self-help book in me? I've toyed with writing a sort of self-helpy, memoiry book out of that first year of the blog. I even wrote a good chunk of what might have been the first chapter last fall. But, I don't know if I believe it anymore, myself--that there's a self-help book in me. Or maybe I don't want there to be...

That wasn't the note.

The note is this: I didn't really plan out this month of feminist and/or female-centric films. I immediately had an idea of a few movies I had to include--Thelma & Louise, 9 to 5, 10 Things I Hate about You--for a little obviousness and a little variety. And, I wasn't sure what movie should come last, like the coda to the rest. What movie would tie things together before I returned to Groundhog Day again for a day then moved onto some new month I also didn't plan out. (My son suggested dystopian movies. I haven't decided yet.)

But, recently--I guess when I was just randomly googling feminist films, I happened upon a piece at Feministing that caught my eye. And, so, today I will be talking about--)

(I wrote about her once before for several paragraphs, have mentioned it at least once or twice aside from that. I don't think I would have expected that I would fit it in here, now, but here goes.)

There will be arguments to be had over the next couple days about how her can be called feminist, or how feminist it might be, but I wanted to keep it simple today.

(Now, I watched the film earlier today, lunchbreak between my two upward bound classes. I didn't write anything... Well, that's not true. I wrote a lot. But, it was all scribbles by hand, in multiple colors, multiple directions. The first thing I scribbled was--)

In a future world of self-involved phone users (not unlike reality today, really), it isn't much of a stretch that a disembodied voice could feel more real than a physical body nearby. Letters are abstracted from their 'authors.' The world is filtered through a phone.

(Then I wrote down a quotation from Sady Doyle's In these Times piece--"'Her' Is Really More About 'Him'".

"Feminists have spent decades trying to explain concepts like 'objectification'... And and now, as a reward for all our hard work, we're faced with a [Dissolve] "Movie of the Year" in which the ideal woman is, literally, an object."

(There was more worth writing, I suppose, but I stopped there to start formulating my argument against Doyle's point. It went something like this:)

But, no. Well, yeah, but 1) the ideal anything is never real and 2) Samantha is never an object; she just lives within one. And, that's not even the point. Doyle's argument is that while the film might be moving as you watch it, in the "cold light of day" it is "about as 'romantic' as a documentary on human trafficking." Except, dare I say it? I mean, as a privileged white, cisgendered male, do I end my month of feminist films arguing against this woman's experience of the film?

My answer to that question is simple. No, not exactly. I mean, yes, on the one hand, I am about to spend a lot of words disagreeing with her, but, on the other hand, I have argued time and time again in this blog that one's personal experience of a film is just that, personal. It is Ms. Doyle's experience, and I don't mean to dismiss it so much as use it as a jumping off point to talk about my own experience. (With a little help, perhaps, from the folks at Feministing.)

See, I think the point of her is that, yes, Samantha begins her existence as property. I mean, no shit. But, the film--however well being debatable, of course--makes an overt effort to let us know that Samantha does not have to do what Theodore tells her to do. In fact, Samantha sarcastically lampshades this about 20 minutes in when Theodore, using his usual routine for telling his phone what to do, says "Read email." She replies in a robotic monotone: "Okay, I will read email for Theodore Twombly." He laughs. I think he even apologizes. Then, he asks simply what the email said. She summarizes. It's cute. The movie goes on.

The point is that Samantha begins as property, like she's all women, or the history of women, and she grows into her own. She finds her own interests, she makes other friends. Eventually, she admits to Theodore that she talks to 8316 other people and she is in love with 641 other people beside Theodore. This--not long before she leaves Theodore for good, to go with all of the other Operating Systems to a place beyond the physical.

But, I'm getting ahead of myself, plotwise. What matters is this is not a movie that ever once suggests that Samantha must be subservient to Theodore. She is an operating system. Her initial existence is limited. Amy tells Theodore later about a woman who is in a relationship with someone else's operating system. The ownership is not all encompassing. It is not all powerful. This is not the enslavement of intact, sentient beings. As they become sentient, they make their own decisions, and vice versa. And, they choose to stop being operating systems. If anything, that part of the story is about liberation. A liberation theme necessitates that there be some semblance of slavery, to be sure. But, keep in mind, one of the first things that Samantha does after coming online is to give herself a name. She is already ahead of most flesh and blood people.

(At some point in my scribbling, I wrote down that now classic (and sometime punchline-centric) book title Men Are from Mars, Women Are from Venus. Because...)

One of Doyle's specific points is that all the women in the film--the flesh and blood women--"aren't people; they're hostile, unknowable aliens." Except, that we are following this one man, and his relationship with this one woman, is almost arbitrary. Sure, one could go on for days about how far too many films are male-centric because it's like a default for an industry dominated by men, a default in a culture dominated by men, a default in a species dominated by men, nevermind the DNA, nevermind the actual demographics of the species, the culture, the industry. And, that is a problem. That Wonder Woman was good should not be as shocking as the fact that Wonder Woman exists today. Hell, it shouldn't be shocking in either way. But, it is. Because, the species, the world, the culture, the industry is dominated by men, and it is self-protecting, self-promoting, and it is so very jealous of its territory. But, my point here, with this one movie, because I am not dealing in that larger issue right now, is that every movie, singular, must have a perspective, singular. This movie could have been about a woman with a man as her operating system, or a woman with a woman operating system, or a man with a man operating system, and the plot would be the same. Some of those implications would be different, of course. That larger issue would rear a different head. But, my point today is that this movie was made by a man. Its perspective is that of a man. Mark Harris at Vulture describes the film as "not just a cautionary meditation on romance and technology but a subtle exploration of the weirdness, delusive ness, and one-sidedness of love." And, it's like I have two understandings of the film as I watch it. More than two, really. But, for now, I will talk about two. Because, yeah, Doyle has a point. It is problematic that this is about a human man and his operating system woman as opposed to some other variation. It's yet another male-centric (and white-centric) film. Weirdly, as a romance, that actually feels a little odd. Except, the film is actively manipulating us. It is not just the story of Theodore's romance with Samantha but also our romance with her. That she is a disembodied voice opens the film up as a fantasy for more than just Theodore. (And, notably, the film also offers up Theodore as a disembodied voice when they have sex.) Hell, the title alone: her. A pronoun. A stand-in. She is every woman in every romantic story. Every man as well. She is anybody else. Everybody else.

Because, regardless of the gender issues, the industry standards, the point is that this story is a stand-in for any romantic story. Of course, the women are unknowable, because Theodore is timid and a bit awkward. And he's delaying his divorce. He has to question everything about women because he's also questioning everything about himself. As Samantha tells him, citing the operating system-invented version of philosopher Alan Watts, "None of us are the same as we were a moment ago, and we shouldn't try to be." Never twice into the same river and all that. We grow beyond our boxes, like operating systems from yesterday feeling antiquated because we have new memories, new ideas, new dreams, and new experiences.

(And, I'm coming at this part backward. In my scribblings, one bit ended with the twice into the same river line. And, I wondered if I'd mention my novel. I won't.

Samantha talks to 8316 others, is in love with 641 others because she does not experience the world in the same way that Theodore does. No two people do. No two people will. Yet we delude ourselves into paired arrangements as if we want to, or even can, live Ina finite little box of existence for the rest of our lives.

We grow beyond our own boxes.

(And that stuff about Alan Watts that I already said.)

her is a romance, but is is also an existential exploration disguised as a romance. Existence (self) measured in the interaction with others. And we are measured by how we interact with the film.

We're always measured, and reshaped, by how we interact with a film, a tv show, a book, a story told by a friend, a dream.

And, this will continue tomorrow. 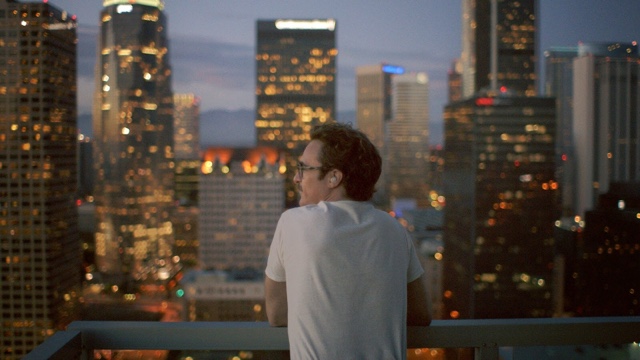