ours is the power, now is the time

Stephanie Abraham explains (specifically coming back to Wonder Woman but the same applies for any film labeled as "feminist") in blog at Ms.:

Now that the female superhero has finally made it to the big screen, critics and audiences are asking whether Wonder Woman is a feminist film. But the question itself is problematic. For one, it makes "feminist" a subjective adjective. Also, it suggests there's a monolithic Feminism, when really [the] feminist movement encompasses numerous feminisms in motion. The more inciting questions are: How does this film represent Wonder Woman? What's missing from this representation? And, what does it say about this particular moment in time?

Or how I'm thinking about it--or about The Craft back in 1996--why do we need the film to be feminist right now (or back then)?

A few family-friendly films, sure, but the more adult fare is male-led. And of course action films are high on this sort of list. Same for 1996 (when The Craft was #66):

Sure, #1 was led by a female, but she was surrounded by males. And, she has only a little agency. Wonder Woman, on the other hand, has agency. She makes her choices, and only really depends on the men around her for information because of circumstance.

As I pointed out yesterday, the key to understanding The Craft as feminist is understanding how much agency Nancy and Bonnie and Rochelle and Sarah have. Their decisions may be limited by one another (and eventually by the power of Manon) but never by those around them, especially not the men. 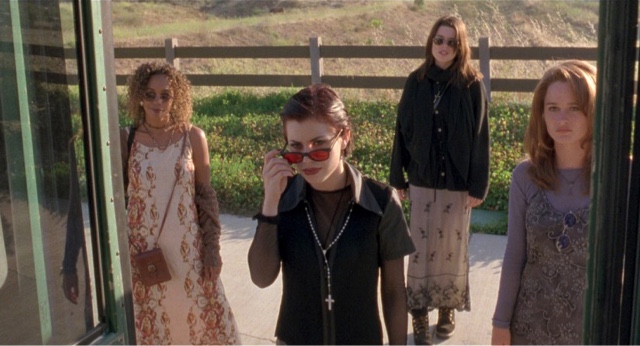 And, I'm not sure what else I have to say about this film in particular. (I thought of commenting on how Rochelle's character was originally supposed to be bulimic, before they cast Rachel True and made the character black. Like maybe they would have had an overweight character, and that could have easily been problematic because inevitably she would have used her new power to be thinner, because thin is beautiful.) But, I think I'm going to spend some time with female-centric films this month.

Coming back to what I said above about the time the film is made, 2017 we've had the women's march and we've got President Trump. Of course we need some new energy in film, feminine maybe, progressive certainly. Keep the cycle going, so Wonder Woman is not an isolated success.