and because i am so charitable

I have only one thing further to say about Cutthroat Island. Except, it's not really about the movie itself; rather, it's about Roger Ebert's review. See, he doens't praise it, but he also doesn't seem to find it as boring and distasteful as I do. And, I am surprised by that. "'Cutthroat Island' does not disappoint," he writes. "It touches all [its] bases like clockwork..."

Those bases, the tropes of any "decent pirate pictures" according to Roger:

(1) an escape from a hostile port; (2) a battle at sea, preferably with broadsides fired and pirates boarding each other's ships; (3) one featured swordfight, (4) a storm at sea, with the survivors washed ashore, and (5) discovery of the treasure and a final confrontation.

And, you know what I like about that list? At first blush, my personal favorite pirate movie--The Pirate Movie--has but one of those, a featured swordfight. Now, at second blush, it's got a storm at sea, but writ small, affecting only Mabel's small sailboat, and setting the entire plot into motion. There is a treasure, but it is found simply, with a musical number to boot, and the final confrontation (which is quite hilarious, and in the end, quite thoughtful in its metatextual reference to the story itself) is barely connected to it. There is no battle between ships at sea, no escape from a hostile port, and certainly no extended chase sequence through a crowded city like the one that fills so much of the beginning of Cutthroat Island, or the more recent Pirates of the Caribbean: Dead Men Tell No Tales... 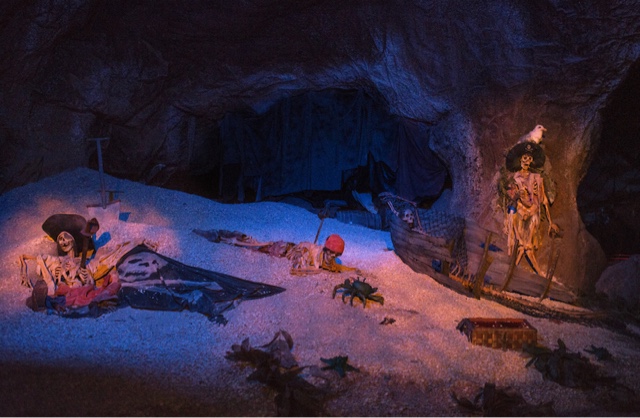 And, speaking of dead men telling no tales, Cutthroat Island makes an explicit reference to the Pirates of the Carbbean ride at Disneyland when Shaw (Matthew Modine) says that very line--"Dead men tell no tales"--when he and Morgan (Geena Davis) come upon a skeleton with a crab crawling on it. If you've not been on the ride, well, at one point, before you're down far enough below ground to get to all of the animatronics (which have recently (or are about to be) altered again to remove the wenches for sale), your boat passes a bit of beach, one skeleton held against a wall by a cutlass, another in the sand, and there are crabs and a bit of treasure. The reference here seems deliberate, so I had to doublecheck to see if Carolco had anything to do with Disney. It didn't. In fact, out of numerous companies that distributed Carolco productions (TriStar several times, Universal a few times, Paramount, Columbia, New Line, Miramax (before Disney owned it), and MGM), Disney never did. Also, Cutthroat Island was the death of Carolco. Adjusted for inflation, I believe Cutthroat Island is still the biggest box office bomb ever, costing around $100 million at the time and making only $10 million at the box office.

I never actually saw the whole movie, by the way. It came out right after I quit the movie theater where I worked (and which had a deal with the nearby theater (where Cutthroat Island was playing) so we ushers could see movies at both for free) and there were better movies available. It was the weekend before Christmas. New to theaters were: Waiting to Exhale, Grumpier Old Men, Sudden Death, Tom and Huck, Dracula: Dead and Loving It, Cutthroat Island, Nixon, Balto, Four Rooms, and Shanghai Triad. The weekend before had Jumanji, Heat, Sabrina, Sense and Sensibility, City of Lost Children, and Othello. I saw most of those in the theater. That weekend, it was probably Four Rooms and Grumpier Old Men. The weekend before would have been Heat and Jumanji and probably Sabrina. The weekend after had a few Academy-qualifying runs, just a few theaters each for 12 Monkeys (saw it that weekend), Dead Man Walking (saw it that weekend), Richard III, Restoration, and Mr. Holland's Opus. Really, this movie had no right coming out for Christmas; it's not fun enough to grab the Christmas family audience. It should have been out in the summer, up against Batman Forever and Apollo 13, Pocahontas and Waterworld... The twofer of Cutthroat Island and Waterworld should have been the greatest of cautionary tales for not filming on the ocean.

But anyway, my point is there were better films to be seen. Even a better ocean-based film in Waterworld. (Of course, the beneath-the-ocean Crimson Tide eclipsed either of them when it came to quality.) There are always better films to see. And better films to make. I'm curious of the exact timeline here--When did Harlin and Davis get together? Did he really think she could be an action star or was he just so enamored he had to have her on his movie? Had Michael Douglas remained attached to the film, would it have played better? If Waterworld hadn't have been going on around the same time, might there have been more oceangoing-crew available to replace the dozen or so who quit after Harlin fired the chief camera operator? Is that even a thing--oceangoing crew? If Harlin hadn't pushed Davis to do her own stunts, might he have let the editors trim more of the action sequences to move the film along better?

Which brings me back to Roger, by the way. He says, "director Renny Harlin ("Die Hard 2") moves the story along smartly." Except, no. The movie barely moves. It's got a pace more appropriate to a tv series...

But, I'm still trying to like it. And, you know what I have come to appreciate? Frank Langella's performance as Dawg Brown. He growls his orders at his men, and snaps at them when they move too slowly. He delivers lames lines like, "I know you're out there, Morgan. I can smell you" as if he means it. And, he exudes more charm as the antagonist than Modine or Davis do as the leads. He even makes me forget completely that there are other villains (until that last half hour when he inexplicably joins up with the British guy. But, best of all with Dawg is that I can buy him actually being a pirate, I can buy him actually seeking out treasure like this. He feels more real.

I wish he would win.