what kind of idiotic joke is this?

I've got Troll 2 playing again, because I wanted to say something more about it. But, I also saw The Dark Tower today, and unfortunately, there are also things to be said about that film in this month of bad movies.

Both films have a problem with audience. Troll 2 is ostensibly a family-friendly horror film, but then Holly and Elliott openly talk about sex--she even specifically mentions "group sex"--and Creedence is fairly sexualized as well. Additionally, just watch that scene with Arnold and the girl in the woods and tell me there isn't some serious sexual undertones going on there; girl with a torn shirt running screaming through the woods feels more like a serious R-rated horror film, or some exploitation film from the 70s.

(In fact, there's room for an interpretation of this film not just as Joshua's hallucinations but his vicinity to puberty being the fuel even if Grandpa Seth's death was the trigger. Think about it: his grandpa dies and Joshua is faced with mortality just as he's starting to get some strange new feelings. Maybe he's seen his sister walking around in those high-cut 80s exercise clothes or heard Elliott sneaking into her room at night.

(I won't go so far as to suggest that it wasn't piss that ruined that first dinner in Nilbog, though.)

He has discovered the wonder, and the horror, of sex. And his family heads off into the country to live on a farm for a while. His whole life is in upheaval. You could easily play this through the film as well. It would make thematic sense that the villains fill the role of sexualized Druid and also conservative minister--two sides warring over Joshua's metaphorical goblins. (Also, is that a Catholic priest?) And, if you want to take it to a really dark place, his secret relationship with his grandpa is kind of a problem. Creedence rather explicitly seduces Brent. And the final sequence, after everything has supposedly been fixed, involves Joshua running into the bathroom where his mother is taking a shower. Instead he finds her being "eaten". Also, her corpse, in this family-friendly horror film, has nipples.)

Even Creedence's two guises are like characters intended for two different audiences. 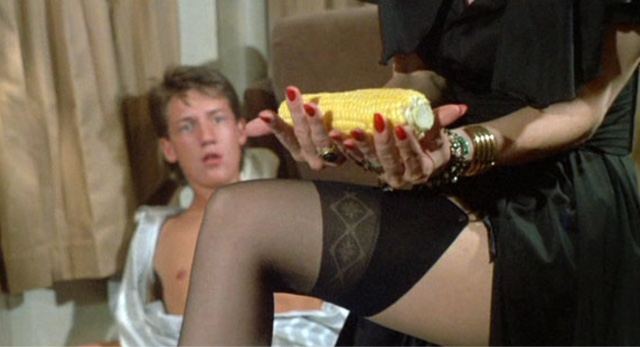 Meanwhile, The Dark Tower offers a lot of details that only fans of the series of novels will understand but goes out of its way not to adapt any portion of those novels accurately--

(Fans of the books would, of course, realize how a different turn of the wheel means the story might be different, but it's a strange bait-and-switch to invite someone because of the story you know they like but then give them some other story.)

--and then plays too rapidly, without little explanation of anything, so an audience coming to it fresh won't get much of the depth of the world. It is just not made for fresh eyes. It demands that you already understand the basic concept of parallel worlds and doorways between them. It forces you to follow a child into a story that isn't his; not really. The novels follow Roland, but Roland barely has any characterization other than Idris Elba looking cool and occasionally reminding the movie audience that he's out for vengeance...

(If anything, the film actually makes more sense as an earlier turn of the wheel than a later one. That's the only way Roland's urge to vengeance works in a story this finite built out of such a grand original. He hasn't discovered his obsession with the tower yet...

Or the filmmakers were afraid of making the hodgepodge of fantasy and science fiction and horror that is the Dark Tower series.)

But, the film hardly offers us the screentime to get to know Roland and father; a good vengeance plot should let you get to know the victims. Instead, the film focuses on Jake instead, like Troll 2 focuses on Joshua, when the story might be better told focusing on someone else. A kid battling goblins is one thing, but this film never tries to be that. Joshua relies on his grandpa, then his family, and mostly they just run away, and then they touch a rock. Really, none of them do much of anything. But then, Erik Amaya at Comicon.com makes an interesting point in his review of The Dark Tower; in a fantasy film from the 1980s, he says, "the logic gaps and errors of scripting will not matter to a child. Instead, they will love that the film suggests their imaginary worlds could be real." Troll 2 not only suggests as much but plays it out quite literally for Joshua. Sure, a world in which Grandpa Seth might be in hell and there are goblins who want to eat you isn't a pleasant world, but it's certainly exciting. Amaya suggests that a child, seeing The Dark Tower might love it because "The amount of world and relationship building an adult's mind requires is unimportant to a child." He argues, a child would assume that "Roland and Jake bond" and that "the evil sorcerer can appear wherever he wants" and that "Roland is sad because of his father died [sic]". The rest of us--adults, or even particularly intelligent teenagers--want to see that Roland's father is worth mourning, that Roland actually mourns. We want to see what a gunslinger is rather than have Arra tell us that Roland really isn't one anymore (though I almost appreciate the subtlety there, this is film and it's visual, and just knowing that he can shoot is not enough to tell us that "gunslinger" means something different in his world than it does in ours. (A later reference to Excalibur actually feels a little too on-the-nose and a little too-little-too-late.) This is something Troll 2 actually does pretty damn well in comparison. In the opening sequence, we get a story about the goblins and what they're about, and we get to see the relationship between Seth and Joshua, and we get an idea of how much Joshua misses Grandpa Seth in his active hallucination of him.

To be fair, The Dark Tower does set up Jake better than it does Roland. As Jake's movie, it actually works better early on because it doesn't try to get into Roland's head. But, again, this is a story about a gunslinger chasing a demon to stop him from destroying the tower that holds the universe together; it's not The Neverending Story, the protagonist isn't a child using his imagination to save the world. If we take Jake as the protagonist, he's about as useful as Joshua here; he just happens to be around when important plot events happen, and he inadvertently drives the climax.

But, we must also remember that Troll 2 is not a fantasy film from the 80s. Sure, it was made at the tail end of the decade, but it feels more like the silliness that should have come early in 80s when, yeah, the gaps of logic didn't matter as much...

Finally, both films end with a bit of deus ex machina--except Jake is the deus ex machina in his own story, without much explanation, some kids just shine.

(See, the arbitrariness of Danny Torrance shining in The Shining didn't matter because his shine didn't solve everything in the end, and the story wasn't really about his shine. It was about the hotel's shine, and the hotel, even in Kubrick's version, has a very obvious history of violence and death the contributed to its malevolence. But, Jake Chambers' powers are arbitrary. His having them is extraneous to the plot, until we need an act three and we need something to force Walter's hand into combat.)

And Grandpa Seth and his backpack is a more obvious deus ex machina. It's also a little bit more of a sexual references; Grandpa Seth just has to slip some bologna to Joshua one last time...

Sorry. Couldn't resist that one.