Hobgoblins is a good example for exploring why a bad movie is bad... Well, there can be many reasons, but this is a big one. Like the more (in)famous Troll 2, Hobgoblins' biggest mistake is not knowing what it wants to be... Or rather, failing entirely at being what it seems to want to be by not going far enough. Troll 2, for example, leans toward serious sexual moments with Creedence but backs off before it goes too far. Instead, perhaps because it was made by Italians directing a bunch of Mormons, it aims at being quaint, being kid-friendly. Hobgoblins makes that same mistake. Phone sex worker magically shows up in person, but is there any sex? Nope. Amy secretly desires to be a stripper, apparently, but strips down to about the same amount of cloth you'd see in a Jane Fonda Workout take from this same decade. Sure, her lyrics are leaning toward explicit. Like that line about showing everyone she's not wearing any underwear, but then the hobgoblins turn everything to chaos and violence before anything gets particularly "adult".

Take the dichotomy of Amy and Kevin as compared to Nick and Daphne. Or Daphne's immediate critique of the video Kevin brought to watch with Amy because it doesn't have "at least one X rating." Nick has been in basic training for two months, and Daphne implies that all he'll want after two months is sex. Meanwhile, Kyle goes off on his own (in Kevin's house) to call his "girlfriend" the phone sex worker...

And that bit is ridiculously tame while trying really hard to be explicit:

Hi, it's me, Fantazia. Thanks for calling. I'm going to see a movie today. It's only rated PG. I want you to show up and make it rated X. Sneak in the rear door. And when the lights go down, drop your pants and show me a full moon. Wave the lunar eclipse and block the projection feed. Next, pull me down and roll me on those sticky floors. Lick that artificial butter flavor off my body. Then, take my clothes and leave me naked so when the lights com up, I'll be the second feature...

That's basically it; we miss the end because Kevin walks into the room. A 976 number if you remember those. 1) they cost way too much and 2) there's no way she'd be telling a quick, complete story like that in so short a time because of #1. But also, who's fetish is that? Even when Fantazia magically shows up later because of the hobgoblins, there's no movie theater involved. Instead they drive to "Reputation Road" to "go all the way." Except they don't "go all the way"; instead, "Fantazia" leaves the car and proceeds to try to push it over the edge of the dropoff. This hobgoblin isn't really interested in the fantasy, any more than the director seems to be. When that would make the movie more interesting. Amy's song and dance may suck but at least it's interesting. At least it suggests something might actually happen. This film has sexual innuendo and implicit promises of sex, but just can't be bothered to "go all the way." And, I think that's a mistake. Especially in a film that has Fantazia say that line about making the film rated X. That is exactly what Hobgoblins needs... And more of the Old Guy, and a lot more of the hobgoblins themselves. Those puppets are hilarious, and people fighting with them is an awesome visual. And the Old Guy is just so melodramatic about everything, and he is acting the crap out of every line (even though he can barely act). But, since the puppets are cheap and, well, are puppets, they can't have much screentime. And, I'm guessing the Old Guy wasn't available for the entire week of production. And some of that $15000 budget had to go to the pyrotechnics and that car they destroy. So, how do you liven up the rest of your film? Take a page from Tommy Wiseau and throw in some sex. And, if it looks as amateurish as the rest of the film, all the better. I mean, you have to know your movie is bad. No one is making Hobgoblins and thinking this is a great film. Hence the sexual innuendo. Hence the rocking van. Hence (purportedly) adding Nick just to add more action (even if that action is badly done). Hence the limited locations... The studio, the house, Reputation Road, and Club Scum--that's basically it. Watch some bad action movies from the 80s, watch some Skinemax, you'll see ridiculous plots, horrible acting, the same silliness that is all over a movie like this. But, they "go all the way" and give you something more to watch when the puppets aren't around.

Amy being a dick to Kevin, Daphne being a dick to Amy--these things are funny, but they're not enough. Kyle seeming 80s coded gay but then going on about his "girlfriend" and apparently getting off on licking fake butter off Fantazia on the sticky floor of a movie theater--this is amusing. Daphne beating the hobgoblin with a spade--this is great. Nick sacrificing himself by jumping onto a grenade--awesome. Nick apparently surviving that--ridiculous and hilarious. (Though the grenades after the first one are clearly part of the hobgoblin-induced fantasy, the film doesn't bother to explain this; you just have to figure it out or be confused.) But, so much of the film drags when the hobgoblins aren't on screen. 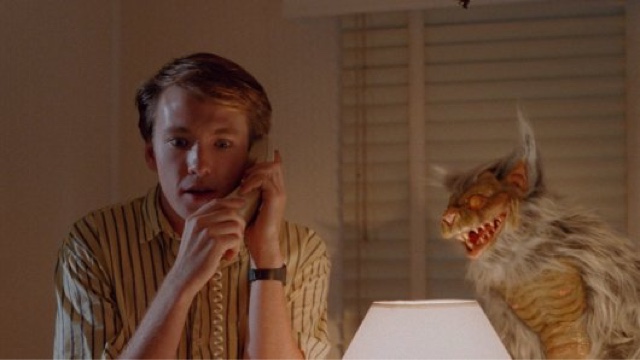 The second Fantazia call, by the way:

Hi, it's me Fantazia. Thanks for calling. I need a new house pet to impress my friends. Now, hurry before the zookeeper comes. Help me hide this iguana on my body. [Alters her voice] Uh, can I help you, miss? [back to her own] Oh, yes, Mr. Beastmaster. Something just crawled up my leg. Oh, see if you can find it. [changes her voice] I think you'd better come back to my office with me. [her own] Now, wait a minute. Are you sure your office is in the baboon pit? Oh, Mr. Zookeeper, what do you think you're doing? This isn't the children's petting zoo. [changes her voice again] I have a new house pet for you, miss. Ha ha ha ha. [her own] Oh, Mr. Zookeeper, I could never take a cockatoo that size.

Then there's a record scratch sound and the fantasy turns real because, like Creedence in Troll 2, she's outside waiting for Kyle. And, I've got a few thoughts: 1) was the ratings board for this movie a bunch of people who didn't speak English, so the stupid puns were an attempt at cleverly getting sex jokes past them? 2) is the phone sex supposed to be as awful as it clearly is? 3) What the hell is the theme to this sex line? First the movie theater thing, now a zookeeper fantasy--that doesn't even involve the guy calling her, which is odd.

Sidenote: when Nick says he can think of a fantasy involving the number three, why doesn't it happen? There's clearly a hobgoblin nearby still or Amy wouldn't immediately after rebuffing him open up the newspaper and get her Club Scum idea. 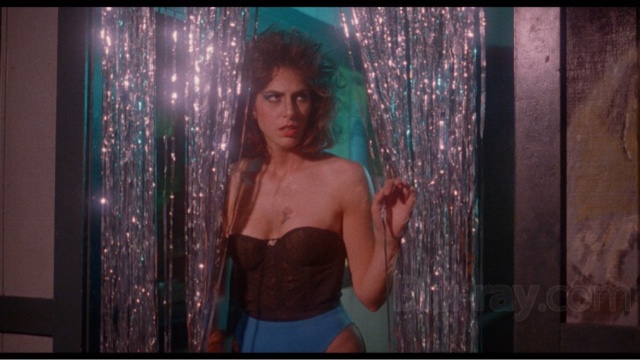 Now, ridiculous fantasies are fine. But, the movie's real fantasies end up being just as ridiculous. The KISSING ONLY and ALL THE WAY signs. Amy's song and dance and flirting with Roadrage, Nick and all his grenades... At some point, the movie needed to take the fantasies seriously, and let the fantasies become really dangerous and frightening. Like when Jack goes into Room 237 in The Shining--nude woman, obviously out of place, something's off, but the comes for him like it's a seduction, then abruptly, she turns into that rotting bloated woman. It's simple but it works. Getting Kyle to drive up to Reputation Road just to push his car over the edge--that's dumb. But, seducing him, maybe even acting on that movie theater fantasy or that zoo fantasy, then--I don't know--eating him, you know, or somehow fucking him to death--that's what this movie needs. Maybe it's too much for a cheap 80s movie. But, I can imagine a remake of this thing that's disturbingly funny instead of stupidly funny, dark and scary instead of just silly.

I want that movie. I want the movie this one wishes it were.