how many times do we have to chase you kids?

From the Los Angeles Times, April 9, 1967: "Hippies... many officials see them as a serious threat to today's young people."

In 1963, counsellors and campers at were run off from a summer camp outside Rosman, North Carolina after "'Hate literature was distributed around [the nearby] town saying some very untrue things about the camp--that we were sex perverts, Communists and God knows what else,' [camp counselor Bruce] Grund said" (NYT, 1963).

In 1964, Reverend Frederick C. Wood, Jr. stirred up controversy when he suggested that sex was a "good." "Premarital intercourse need not be 'bad' or 'dirty,' he said. 'Indeed, it can be very beautiful.' (NYT, 1964). In 1959, Leo F. Koch, an assistant professor of biology at the University of Illinois was dismissed from his position after purportedly condoning premarital sex. Koch wrote a letter to the school paper, which included this:

With modern contraceptives and medical advice readily available at the nearest drugstore, or at least a family physician, there is no valid reason why sexual intercourse should not be condoned among those sufficiently mature to engage in it without social consequences and without violating their own codes of morality and ethics.

A few months later in 1960, Roger Ebert (yes, future film critic) writes about that letter for the same paper and he describes "Police [patrolling] lovers' lanes and [shining] spotlights into suspicious cars." He writes, "If actual sex was observed, arrests were made" (Ebert, 2010).

I was reminded of this stuff (all from research I did for my paper "Smash Monogamy: Sexual Revolution to Political Revolution", originally written for one of my last classes as a history major and later published) when the cops in "Manos": The Hands of Fate stop that young couple from making out in their car... twice. Because, really, it feels like "Manos" has something to say.

It's interesting that Troll 2 was inspired by writer Rosella Drudi being bothered when several of her friends became vegetarians. And The Room, according to Tommy Wiseau himself, talking to Elina Shatkin at LAist, came from him researching drug problems and "the third party" "within a relationship". Filmmakers with something to say just go ahead and make movies, it seems, regardless of skills. Of course, Harold P. Warren, who made "Manos", was just an insurance (and later fertilizer) salesman who made a bet with a visiting location scout that he could make his own popular horror film. Two months and $19,000 later, he had "Manos": The Hands of Fate. Badly written, badly acted, badly edited, but he did it.

And, despite certain intervening details, like the scenes with the couple getting interrupted by the cops supposedly only exist because that actress had broken her leg and couldn't play the role she was supposed to, I feel like, deliberately or not, Warren had something to say here. I mean, look at the monster movies from the 1950s, with giant ants and whatnot--they're latching onto paranoia about nuclear energy and the bomb, they're running with real fears and turning them into entertainment. Whether it's Warren's own feelings or just a more general mood around America, "Manos" is clearly latching onto paranoia about hippies and the counterculture, about strange people living away from society as we know it, who will abduct and corrupt whoever comes to them. Margaret and Debbie become wives to the Master, Michael replaces Torgo as his Igor/Renfield. Of course the road to the Master's house has a young couple making out. Of course that same road has inept police officers who cannot do their job to save their life. That road, metaphorically speaking, is the road to the hedonistic hell that is the counterculture. That the Master's wives fight amongst themselves is a secondary issue, implicitly suggesting that the counterculture cannot stand forever (even if it can win in this particular instance).

Imagine a movie with more of a budget and I expect the Master's wives would not retain those white gowns but spend more time naked. (Similar issue with Hobgoblins; trying too hard to bother with real nudity and sex scenes, but also not trying hard enough to hire actresses willing to turn some group wrestling into an orgy.) Robert Houriet, writing about a commune called Oz for the New York Times, describes the clothing optional lifestyle on the commune: "The men wore little but jeans, the women wore the long, loose dresses and there was a considerable amount of group nudity" (p. 89). The wives' costumes invoke more than mere nudity may have, though. The diaphanous white suggests something virginal (and of course a wedding gown), but that white is interrupting by a red sash. Purportedly, the sash was supposed to suggest a tail but I see it more as a symbolic representation of menstruation, marking them as women worthy of the Master; remember, Torgo and several of the wives all say the Master wouldn't want the little girl. (Although, in the end, she is among the wives.)

Torgo's deformity--while he is supposed to be a satyr, the film never explains his gait--is both a) the only reason he can be trusted around the wives and c) invokes another sense of the counterculture: along with the satanic nature of the Master, Torgo's deformity suggests that there is nothing good to come from the counterculture. Its unprotected premarital sex. Its STDs. Its drugs. Los Angeles Times, 1967: "[B]ecause of the hippie movement, today's runaways are exposed as never before to the three-letter hazards of pot, LSD, STP and sex" (p. F1). We don't get to see Michael and Margaret and Debbie (and Poppy) before they have gone on this vacation. But, that lack of detail simply universalizes their situation. They could be any nice, wholesome family (with a dog) taking a break from work and school to exercise their freedom and privilege on holiday. That is the horror of "Manos". That any good family could be corrupted by satanic, hedonistic, strange and unusual folk on the periphery of society. 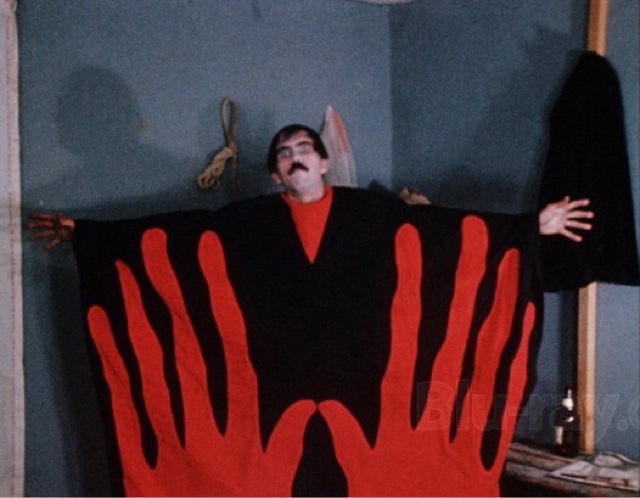 Bonus detail: “Row Row Row Your Boat” was the anthem of Timothy Leary’s enclave in Millbrook.