I saw two good movies today. One a horror film, far better than it should have been (though with one annoying flaw right at its center). The other a nice family drama with echoes of last year's Captain Fantastic (which I loved), and based on a true story. That is, Annabelle: Creation and The Glass Castle, respectively.

But, right now, I'm watching The Happening because, I suppose I hate myself.

Now, The Happening isn't all bad. Until Mark Wahlberg shows up on screen, telling us (or his students) about some article about bees that Shyamalan (or Wahlberg's character, though I'm not sure he has one) read in the news, the movie is actually pretty good. A slow burn handful of minutes, that lady losing her place in her book twice then slowly pushing her hairpin into her neck, all of those bodies leaping from the construction site... And then Elliot (Wahlberg) teaches science but doesn't understand what "theory" means.

Cameron Fry has become a principal. Good for him. We should follow him instead of Elliot. Elliot sucks. He says every line like he recently discovered language. 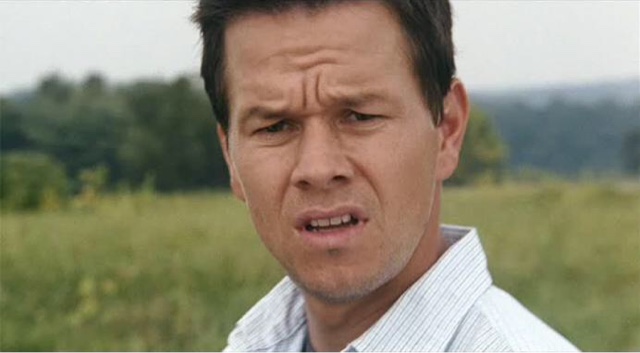 Alma (Zooey Deschanel) manages to be even stranger, talking about the evil of this toxin (which was figured out far too unrealistically quick) like it's the latest fashion she saw on a commercial. It's like Shyamalan really wanted to make a movie where all of the emotional reactions of everyone were mixed up but accidentally made this one instead. For example, Julian (John Leguizamo) and Alma dial up their awkward conversation (deliberately, awkward, mind you) to inhuman levels. And, nothing will be normal again.

Meanwhile, the only real problem with Annabelle: Creation is its abrupt turn from a slow burn first half into a less interesting (but still pretty good) second half filled with CGI and violence (but SPOILERS few actual victims). It manages to offer up characters whose strangeness feels real. Unlike Elliot or Alma or Julian here.

This sequence with the gun and the string of suicides is great filmmaking, better than most of the rest of The Happening. The worst thing about Shyamalan is not his horrible impulses toward the inane but his inconsistency; he can be a brilliant director with one scene and then heavyhanded and silly the next.

David F Sandberg, the director of Annabelle: Creation, on the other hand, is consistently... good. Never great. He knows how to let a visual linger, knows how to get a good performance from his cast, including several young girls. So does Destin Daniel Cretton, the director and writer of The Glass Castle. Both of them get great performances out of kids. Yet here, I'm not even sure Elliot actually knows what a mood ring is.

The Glass Castle, based on Jeanette Walls' book, offers up the kind of character in her father Rex (Woody Harrelson) that is a force of nature, an off-the-grid-living alcoholic who is caring and nurturing one moment, destructive and maddening the next. The kind of part

Here in The Happening, the force of nature is different, and Shyamalan's reliance on obvious dialogue and obvious visuals makes that literal force of nature feel weak and unimportant. It is just there. Rex Walls, though, or the demon that is inside Annabelle--their actions drive their respective stories. They have agency. The plants... The plants just are. A passive antagonist is not an antagonist at all. The premise is intriguing, but there's a reason that say, Night of the Living Dead is about the humans turning on each other, a reason that most any zombie movie is; when you have mindless villains or passive villains, you need someone else to be the antagonist. You need man's inhumanity to man, you need racism and sexism and every -ism that has ever pulled people apart. Instead, Shyamalan focuses on a random grouping of characters, and events happen without much logic. (By the time Jared and Josh are killed by the unseen paranoid guy, it's both too late, and too brief. Same with the brief scene with men in Fairfield, Nebraska loading guns.)

Annabelle, though--she wants something. She wants to exist in our world. She wants to toy with people. She wants a soul (or two or three). Rex Walls wants to take care of his family but he's damaged and broken since he was a child. We see orphan girls in need of parents, parents in need of children, and a nun seemingly (though not confirmed within the film, but one reference in the film suggest her character may be involved in the Nun movie thay've got spinning off from the Conjuring series soon) turned to running an orphanage because of the loss of her own child. That's Annabelle: Creation. We see four children, three girls and a boy, turning one and on to each other as their father destructs and self-destructs, as their mother takes him back and takes him back, as they are moved from place to place, with no sense of anything solid until they demand it for themselves. That's The Glass Castle. But here? We see random characters, most of which we learn very little about--

Alma isn't having an affair, but apparently had dessert with a guy and that's troubling for her, Julian is concerned for his absent wife, Elliot is perplexed by, well, everything, and the unnamed Nursey Owner (Frank Collison) likes hot dogs

--and they kill themselves. And other than maybe Julian, we have no reason to care when that happens. It's just plot. It's impersonal. And it's a little silly.

Two orphan girls swear to get adopted together and it's easy to care. Four siblings swear to make it out on their own, away from their parents, and we already have a good portion of that film behind us to make us care. Maybe a better comparison would be Jeannette accidentally lighting herself on fire while making lunch, and we already understand so much of her character, of her mother, and the family dynamic. But, Alma feels guilty and lies about going out wth that guy, and it's hard to care.

But, I can't fault Shyamalan for trying. I mean, he wants to say something. About nuclear power, about overpopulation, about... something. He has put some thought into this story. He has a message. If more filmmakers, better filmmakers, had things to say, we could have some really good movies.

The Happening is built like Shyamalan's earlier Signs, following one small group as something huge is happening. But, there, we had characters with depth, characters with personal struggles, characters with quirks. Here, we never get that far. Elliot and Alma just aren't that interesting. Mrs. Jones (Betty Buckley) is interesting, but she's also an oddity here. She's so disconnected from society that she's disconnected from the story. She's there for one more death to set up an emotional climax that is neither earned nor acted successfully.