i have tried to prevent this from happening

Starts simple enough. Old security guy at a film studio showing the ropes to a younger guy. Younger guy opens a vault he shouldn't hears some strange gurgling then... falls to his death? Off a stage? Inside the vault? What was gurgling? Did they not have the puppets that day of filming?

And, it is not apparent from the film so far what the plot is, or is going to be; this guy Kevin got hired to replace the dead guy, but then we left the studio lot to meet some of Kevin's friends--his girlfriend Amy (who seems more into Nick than Kevin), Nick who's in the military, Nick's girlfriend Daphne, and the (coded) gay friend Kyle. Kyle called a (G-rated) phone sex line for some reason, and now Nick is "teaching" Kevin how fight, and the music is all dramatic and now the van is rocking after Nick and Daphne got inside... And that lasted 20 seconds. It can't have been any good.

I'm wondering, what is this movie? And, now Kevin's at work, talking to the old guy about his girl problems. I'm not sure this thing had a script. Things are just kinda happening and the dialogue is pretty bad.

Some guy sneaks onto the lot, pulls a knife on McCreedy, and Kevin thinks he did something impressive by firing a gun into the air. I'm waiting for this to go somewhere. And doofus--this is Kevin's new name--just decided randomly to leave his walkie talkie on the floor. And, I kinda want him to get eaten, or whatever the still-unseen-at-half-an-hour-in hobgoblins did to the previous guy...

Yes, they show up finally, and they're driving a freakin' cart! 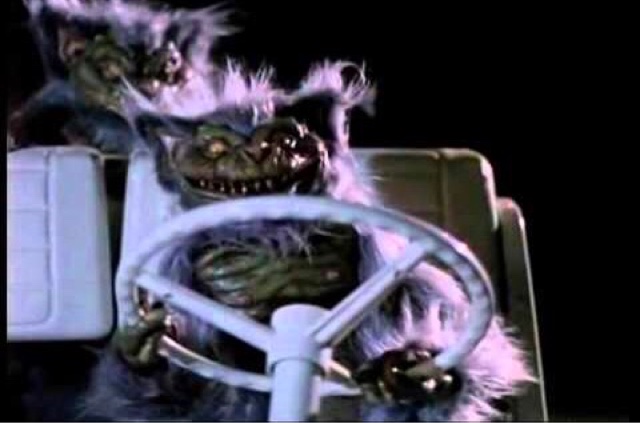 And, Doofus just said what I'm thinking: "I don't understand. What just happened?"

And, we get a flashback to a hobgoblin showing up in a spaceship, when Old Guy was younger. And this movie just got awesome.

Old dude is monologuing the crap out of this exposition.

And, we're back with Kevin's friends, having a really lame dance party.

Old Guy said the hobgoblins make your fantasies come true, but this one just decided to attack Daphne instead, then she wrestled him for a moment than beat the shit out of him with a spade (off screen of course).

And, Nick almost set off a grenade in the living room.

Although, the makeout point ("Reputation Road") having signs for an KISSING ONLY section and an ALL THE WAY section is... mildly amusing.

And, there was the budget--crashing a car down a hill and it explodes. (Plus some grenades later. And lighting a guy on fire.)

Oh, this editing is amazing. Kyle says, "I'm trying to" before Kevin says "Hit the creature."

And now is the scene in the low budget film in which the band the director knows (or is in) play an entire song, and there are no hobgoblins anywhere nearby, haven't been for ten minutes or so. And, now Amy is dancing, for a long time...

And I miss Old Guy.

Really, though, I don't understand what they were going for here. The dialogue includes a lot of adult subject matter--threesomes, vibrators, faking orgasms--but the action is barely more adult than Troll 2.

And then the hobgoblins go back into the vault... Oh, SPOILERS. The main characters basically did nothing. But, Old Guy blew them up, I guess. Which he could have done 30 years ago, but didn't.

But, hey, silver lining: I didn't get into a rant about Trump or World War III.