who survived this terrifying ordeal

Plan 9 from Outer Space is, on its surface, an awful film, far worse than The Happening, but even if you've not seen Ed Wood and seen Johnny Depp's take on the titular director as a man so in love with film he cannot see its flaws, this movie has charm. It's just so... earnest and overwrought; its voiceover is too much, its melodramatic underpinnings are too big for its short running time; and its straightforwardness of plot coupled, its simplicity of sets (like this airplane cockpit which is barely more than a wall with a curtain; they don't even have steering columns), its simplistic acting (without being goofy or inhuman like Walhberg or Deschanel in The Happening), it's mix of cheap original footage and stock footage, and its ridiculous premise make for a weirdly entertaining thing. 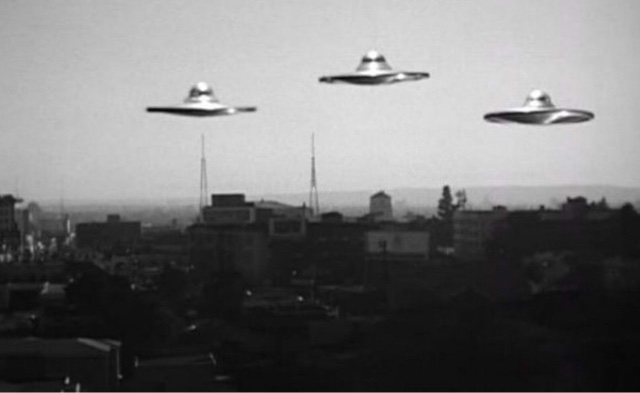 Jeff's (Gregory Walcott) rant about how he can't tell anyone about the flying saucer he saw because he's "muzzled by army brass" feels like the kind of rant Shyamalan puts into his movies. But, the thing is, if they made a film--M. Night Shyamalan--I don't imagine him as being in love with film. He's clearly enamored with something about what he can do with film, but that' snot the same thing. Take Lady in the Water for example. I have been consistent in my dislike for that film; that is worth noting before I go on. There, Shyamalan invents a new mythology and casts himself, literally, as a writer whose ideas will save the world. That takes a whole lot of ego. Hell, just his Hitchockian habit of casting himself in most of his movies takes ego. Usually, it's small roles, sure, but vital ones--the doctor in The Sixth Sense, the suspicious stadium attendee in Unbreakable, the guy who killed Graham's wife in Signs, the guard with the on-the-nose-headlines newspaper in The Village, and I'm pretty sure he was in Split too, but I cannot remember what he did [looked it up and apparently he helped Dr. Fletcher with video footage]. But, Lady in the Water--that one goes beyond the rest; and maybe it's because I have become increasingly troubled by Shyamalan's filmmaking, but by that point I was pretty sure he was full of himself, and then there he was trying to prove it.

But, enough about Shyamalan (at least until I get to another one of his films here in this blog).

Like The Happening, Plan 9 from Outer Space has a tell-don't-show problem, of course. But, that's a little more forgivable in 1959 than in 2008. Less possibility for effects, practical and special.

That's why, I think, I've gotten increasingly annoyed with the various deliberately-cheap Syfy movies like Sharknado; their badness is hard to forgive, especially once the initial novelty wears off. The premise is silly, but imagine a realistically-rendered sharknado and how terrifying that could be.

And then I neglected to say anything else. The film is the film. And, the real world with its real violence distracted me a bit. And, I kinda want some aliens to show up and threaten us into not hurting one another. Of course, that's just fantasy. That's just film. In the real world, that's a stupid solution. Threats just make things worse. Violence begets violence, no matter how powerful one party may be. (Hell, the movie kind of gets at that too. I'd forgotten where this thing went in the end.)

But bad movies distract. The violence isn't at my backdoor. So, I can afford to be distracted. I wish that were the case for everyone.