the most frightening monsters

I haven't watched many made-for-tv movies for this blog. (12:01 comes to mind as one I did watch, 12 Dates of Christmas another.), but they almost have an immediate excuse for their badness. The tv budget and, if the movie is old enough, the film quality just are not going to be anywhere near most films that were released into theaters. Mazes and Monsters has the added excuse of being based on a novel inspired by some bullshit paranoia--namely that playing Dungeons & Dragons can make you a) be a satanist, b) go crazy, c) kill yourself (or, per this movie, the worst possible option d) try LARPing). 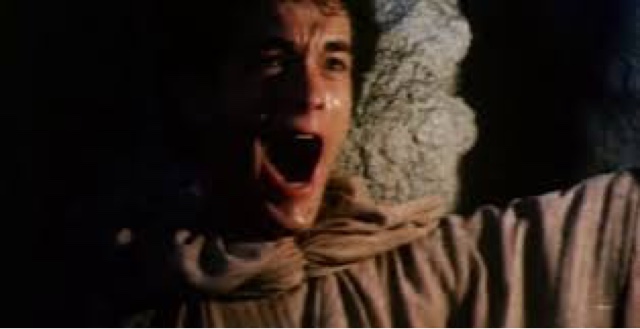 It's a bit simple (but not unrealistic) that Robbie (Tom Hanks) joins up with the Mazes and Monsters group because of the attractive girl Kate (Wendy Crewson). But, I like that immediately after playing with them the first time, we get a montage that establishes that they're becoming friends. Speaking from experience, it is quite easy to become friends with people you roleplay with, quite easy to form real-world bonds after spending such times together.

Hell, even people I only play with occasionally, or just once (not the ones I play with every Sunday) are some of the nicest people I know. Like taking a little time to not be ourselves grants us some perspective and empathy. In a 1947 essay, J.R.R. Tolkien writes:

Why should a man be scorned if, finding himself in prison, he tries to get out and go home? Or if, when he cannot do so, he thinks and talks about other topics than jailers and prison-walls? The world outside has not become less real because the prisoner cannot see it. In using Escape in [a negative] way the critics have chosen the wrong word, and, what is more, they are confusing, not always by sincere error, the Escape of the Prisoner with the Flight of the Deserter.

C.S. Lewis talks about Tolkien in a 1966 essay: "Professor Tolkien asked me the very simple question, 'What class of men would you expect to be most preoccupied with, and most hostile to, the idea of escape?' And gave the obvious answer: jailers." More recently, Neil Gaiman writes,

People talk about escapism as if it's a bad thing... Once you've escaped, once you come back, the world is not the same as when you left it. You come back to it with skills, weapons, knowledge you didn't have before. Then you are better equipped to deal with your current reality.

Fantasy writers, all of them, of course. Me too. And I run a D&D game and play regularly. I'm obviously a fan of escapism as such. Not a fan of the term, as I've suggested more than once in this blog. But, look at the characters in this film, for example. Jay Jay (Chris Makepeace) is a college sophomore at age 16, he's a loner not entirely by choice. Robbie is still dealing with grief over the disappearance of his brother. Kate has relationship problems. Daniel (David Wysocki née Wallace) wants to design video games but his parents dismiss that as a hobby. These are people who can't have their lives the way they want their lives. So they find other lives to live part time.

As a film--I mean, like, structurally--Mazes and Monsters isn't really that bad. We know up front that Robbie has some problems when he played the game before. He plays it again, he starts to lose touch with reality. The film arises out of paranoia about Dungeons & Dragons, but it's really something more like an exploration of a guy with mental health issues. Good for him he's got friends, people who care and notice when he's acting strangely. Robbie goes missing, his friends (and the police) look for him. It's tv, so it's not quite the 3-act structure of a feature film. Unlike the apparent inspiration, logically, the film is not actually suggesting that Mazes and Monsters (i.e. Dungeons & Dragons) will ruin you; four players and only one goes crazy--that's not the best odds, but it's hardly suggesting the game is a backdoor for everybody into devil worship. The over-the-top acting in parts isn't even that bad, in context.