I was going to leave today's entry blank. Well, not totally blank. That felt like cheating; I was going to have a single period as a hyperlink to my Twitter account. I was going to livetweet through Sharknado 5, but I got bored and mostly ignored the movie (though I left it playing on the TV because, well, rules). I was going to watch bad movies this month...

Actually, I'm still going to watch bad movies this month. But, I want bad movies that were genuine attempts at good movies. I'm pretty sure Tommy Wiseau thought, and still thinks, though he apparently sometimes claims otherwise, that The Room is good. I'm pretty sure Claudio Fragasso thought that Troll 2 was good. But, some recommendations made for me on Facebook--maybe I should have been clearer than "so bad it's good"--are not movies that are trying to be legitimately good movies. Or maybe I'm just being picky because the last week has been mentally exhausting and my insecurities and anxieties and my depression are fucking with me. Or Sharknado 5 and 4 and 3 and 2 and that fucking first one absolutely suck, and the excitement over them, including my own, is a sign of the apocalypse. Or, more likely, both.

But, seriously, the people calling the two hours of Sharknado 5 the best two hours of their life--who the fuck are these people? At least the first one has a bit of charm to it. It was so silly it was delightful. And it's a downhill trudge into useless cameos and inane plot twists. Actually, it had those things right up front. Sharknado wasn't the start of this. I'm not sure which movie was, but it was somewhere between the theatrical release of fairly good movies like Anaconda--which is insane but oh so entertaining--and Lake Placid--which has some serious cleverness to it--and the seemingly weekly _______Shark and Giant Octopus vs_______ movies that seemed to be competing to be the stupidest thing put to film. (Well, probably not actual film, but you get my point.) We should never have a competition to do the worst. Film should add to the world. And, just being entertaining is not enough. Make us think. Make us feel. Make us grow. Make us better than we were before. The best films destroy something in us and rebuild it, reform us, rewire us, reshape us, reveal us.

Or maybe I want too much from film.

Because, honestly--and it should be obvious by now--every film does all of that a little bit. My experience of a given film is just that: my experience. The film you watch is not the film I watch. But, a film, even a bad film, needs that think, whether it's punctum or something broader, but there need to be something real. Rosella Drudi's annoyance with vegetarians is real. You hear that about her motivation in writing Troll 2 and you understand something, it makes sense; Troll 2 is satire, poking the vegetarian cultists, but also--probably inadvertently because of the bad acting--the people who can't be bothered with vegetables. Tommy Wiseau is clearly enamored with the idea of the adopted family you form with your friends and neighbors. (I've never had the latter, and have barely had the former, but my own fiction writing has often reflected something similar.) For whatever reason, perhaps a betrayal in his real life, The Room is Wiseau's take on what happens when that "family" is broken. That is a subject worth exploring, a subject worthy of storytelling.

But, what is the worthy idea in Sharknado?

Now, I'll admit that I have enjoyed many films that don't have it. There is room for a film that doesn't. But, it needs something good. It can't aim downward.

Yeah, I'm contradicting myself. I do that. Because, I'm not suggesting a movie like a Sharknado shouldn't exist. I just wish someone somewhere in the production would have thought to put a little fucking effort in. Watch Buckaroo Bonzai or Time Bandits or even Labyrinth--those movies are insane, those movies are full of silly crap that feels out of place, but they were made by people who were trying to do something other than--and color me a cynic all you want--cater to the lowest common denominator to make a bunch of advertising money.

It makes me a little angry, actually, because I love film. I love what can be done with film. I still sometimes wish I hadn't given up on making films so many years ago. When filmmakers can make a living off of lowbrow bullshit like Sharknado 5 I am, I admit, envious, but I am also pissed off. Like, how does anyone deserve to succeed by not trying to do something good? 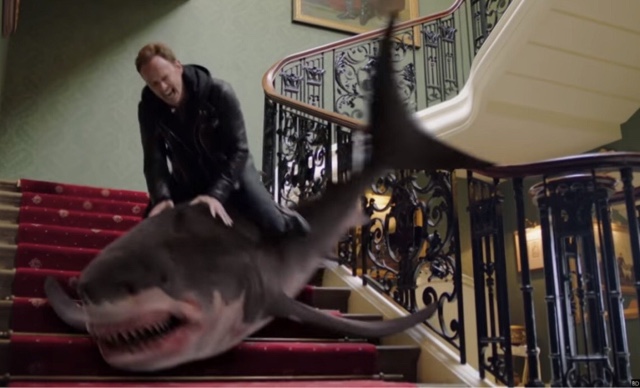 Tomorrow I'll be celebrating a movie that sucks, celebrating the failure of someone who tried. Well, maybe.