The one woman's confusion about her book and then stabbing herself in the neck--that's good cinema. The other woman seeing people clawing at themselves, but we don't get to see that clawing--that's just offensive filmmaking. Something Shyamalan does far too much in The Happening; he has characters and fake newscasters tell us things rather than show us things. And, at the climax of the film, while Nursery Owner has already offered up bits of the explanation for what's happening, we aren't offered visual clues to figure it out, and we don't really get to observe the process of Elliot figuring it out... Okay, we are literally allowed to observe him figuring it out but it's so... lame:

The construction site scene is a better opening because we see the action. We don't just hear about it.

But, the best scene comes later--

(Three hours into the "event" that's happening, we've already had autopsies, we've got a detailed explanation of the chemicals or whatever turning off some bullshit receptors in the brain that keep us from killing ourselves, and we've already heard that the event is isolated to New York, just in time for the event to spread to Philadelphia.)

--when a cop shoots himself, drops his gun, some blood spurts out of the wound, a driver (who that cop has just spoken to about the weather) gets out of his car, walks toward the camera, picks up the gun, shoots himself, falls to the ground, and the camera pans to the right just in time for a woman to walk over, pick up that gun and shoot herself, and it's all one take, and it's better filmmaking than anything to come after. 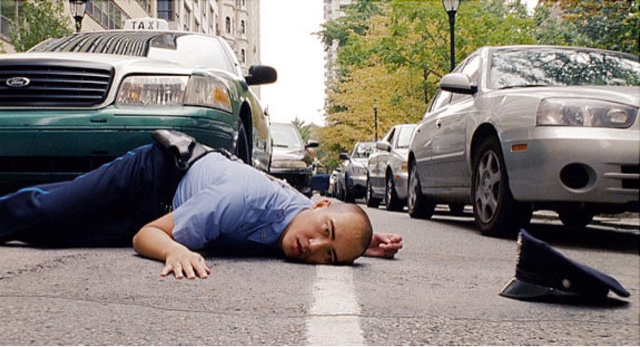