look in the mirror and see what you look like

Subtitle this one: Some interesting stuff from the commentary. That is, Harold Ramis’ commentary track from the 2002 Special Edition DVD.

(The previous five would be Meatballs, Caddyshack, Stripes, Ghostbusters, and Ghosbusters II.)

Opening scene was a “reshoot” to give a little more setup. Remember, Rubin’s original screenplay started with the repetition already going.

The song “Weatherman” was written for the film. Ramis wrote the lyrics along with George Fenton.

Ramis never went to Pittsburgh. Second unit shot the aerials. The driving van aerial shot is of the actual drive up to Punxsutawney, but Punxsutawney had no “real town center” visual so they filmed in Woodstock, Illinois.

Cool connection for me, since I was a History major as an undergrad—they show the courthouse where communist Eugene Debs was tried.

The Bed and Breakfast exterior is a house in Woodstock. The interiors were built on a makeshift stage in Crystal Lake, Illinois.

Ramis thought the concept seemed “rather thin” when he first heard about it. But, Trevor Albert got him to read it and Ramis did a rewrite.

Ramis talks about Bill Murray’s thing for keeping track of scenes during shooting (which I’ve read about before); he had a “bad Phil” and a “good Phil” and he just wanted to know which version he was for a specific scene.

(This isn’t from the commentary but I just noticed that Ned is not only pushy in his dialogue and body language but I swear he doesn’t blink once, at least in the first exchange with Phil. He’s got a rather intense stare.)

The groundhog wrangler (seen in the film as the guy who pulls the groundhog out of the stump after Buster raps his cane on the door) raised a family of groundhogs just for the film.

They had about 400 extras at their version of Gobbler’s Knob, “very patient” people. Ramis said they had giveaways to keep them happy, because it was very cold while they were filming, about $100 every hour.

The blizzard cop was “revoiced” in post-production.

Ramis is awesome in his commentary in the “celebrity in an emergency” phone call scene. He points out how he likes the dialogue, then mentions that he wrote it himself so he should like it, and proceeds to recite some of it along with Murray.

As Day 2 gets going, Ramis describes how the original script got going with repetition already in progress, with Phil’s voiceover explaining things. Ramis told Rubin that he “loved the fact that he just started right in the middle with the device already occurring. And, that’s one thing that I would never change. I promised him that. And, of course, that was the first thing I changed.”

“For the economy of the shooting schedule,” Ramis explains, they would film scenes set in the same location—he’s talking about this during Phil’s second exchange with Mrs. Lancaster—so Bill Murray “had the advantage of playing these scenes with her one right after the other, so he could progress his attitude without having to remember what he did on the previous day.”

Because it had to look like the same day, exteriors had to be filmed over a short period during winter, so it was actually cold for external shooting.

(I just noticed this: Larry’s camera says it’s a Betacam, and the videotape does look like it could actually be beta. I know the film is two decades old, but, wow, I thought beta was gone by then. Yes, I do remember beta; I even remember when the Warehouse video rental store had both a beta and a VHS section. Though my family never used beta.)

Apparently, they did film the scene in which Phil trashes his room to be sure the day is repeating—this was replaced by the broken pencil because the dissolve to the neater room wasn’t working.

The Tip Top Cafe diner set was built in an empty storefront. The town tried to keep the diner around after but Ramis says it “didn’t stick.”

In Brazil, the movie was called The Black Hole of Love. That is awesome.

Ramis refers to the “adolescent” portion of the story... I like this terminology. Since the story holds up as representative of Phil’s lifecycle, the idea that his period of taking advantage of things is his adolescence works pretty well. In these terms, the film isn’t about Phil learning to be a better man, necessarily, but growing up... not that those two shouldn’t go hand in hand.

The jail cell had to have a dining table removed. The “jail” connected to that courthouse mentioned above—and which contains the bar seen in the film—uses the old cells as dining areas.

Bill Murray did not have a “spit bucket” in the table-full-of-food scene. So he actually ate all the food in every take, including “many pieces” of that angel food cake.

(I’ve got the subtitles on, since I’m listening to Ramis’ commentary. And, I find it odd that Larry’s line—”we better get going if we’re going to stay ahead of the weather”—that we will hear a few times, and which we will see written down on a scrap of paper later is not subtitled word-for-word. I almost worked subtitling once (hours didn’t work for me). Larry’s line seems easily doable.

“Why’s he dressed as Clint Eastwood? Because he can.”

(It occurs to me, given that Ramis pointed out the exteriors were actually filmed in winter, plus the reality in the film is taking place in a day that Phil says will have a high of 30 degrees, Phil’s french maid costumed date should be a little more upset about being dragged out in the cold in that short a skirt.

(Also, I forgot to mention Phil’s line—”this is a man we’re talking about, right?”—in my entry yesterday about gender issues. But, since this is earlier in the process, Phil’s sexism is at least more understandable.)

(Ramis doesn’t mention it, and it’s one of those things that is too small to cover an entire blog entry, but I love that Phil clearly does not like his first taste of sweet vermouth on the rocks with a twist.)

The restaurant seen in the film is in Chicago, so not the one in the courthouse with jail cell tables.

Ramis points out that the French poem is actually a lyric and may be Belgian (but I’ll cover that more in a separate entry in the future).

“Did I mention that I kept that overcoat?” This is, I think, the third time Ramis has mentioned it.

Ramis suggests that on the night Phil gets Rita in his room after their date, he only “thinks” he has affection for Rita. Interesting. Arguably, he does have affection, maybe even something stronger, for her already—Phil does suggest something changed in him the first time he saw her—but maybe adolescent Phil isn’t capable yet of knowing just what that affection means or what he should be doing about it.

Ramis compares (and suggests Rubin intended) Phil’s Journey to the five stages of dealing with death and dying, but that’s worth its own future blog entry.

Ramis mentions the Groundhog hunt. He calls Phil’s description of the previous meaning of the holiday a “true fact.” I’ve already covered that bit in my sixth entry.

Murray was bit twice when they had the groundhog in the truck, and needed a rabies shot after.

(Subtitles got Larry’s line right in the scene where it’s got to match what’s on Phil’s scrap of paper.)

Phil talking to Rita while she’s asleep—that was Bill Murray’s idea, based on something he did on his wedding night when his wife fell asleep after having too much champagne. And, there are no cutaways during the speech because they neglected to film any coverage. I think it works better as it is, letting the speech just be.

Ramis says that “Associate Producer” Suzanne Harrington has a moment in all their films in which she falls in love with the main character and this is where she fell for Phil. Ramis suggests maybe the audience does as well.

(I put Harrington’s title in quotation marks because that apparently was not her official title on the film. She is listed in the film credits as Assistant to Mr. Ramis. Took me a little while looking in the IMDb credits to find how to spell her name.)

(Ramis says, as Phil awakens anew that he’s a “new man. He’s got a whole new plan.” And, there is an awesome visual as Phil walks by the Old Man and gets out money to give him—I don’t know if it was on purpose, but I love it. A woman [the Phil Sign Girl] with a cardboard sign that says “PhiL” on it walks by behind Phil, and she’s carrying her sign upside down. Phil isn’t Phil anymore. He’s on a new (though not necessarily reversed) course. I like it.) 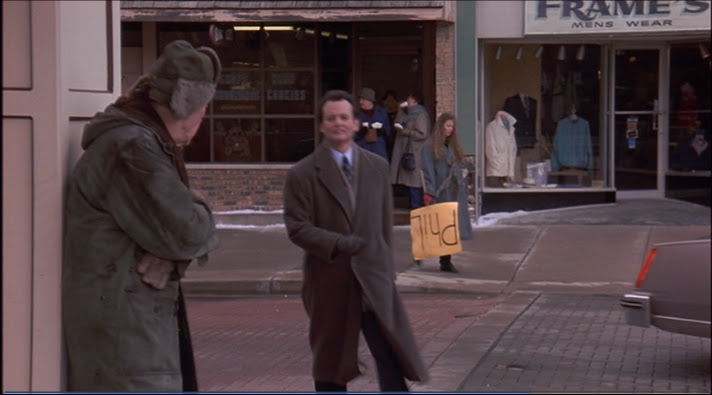 Ramis, probably like all of us, loves the moment of “throwing the little girl out” of the piano teacher’s house.

Bill “devoted himself” to learning how to play “Rhapsody on a Theme of Paganini” but he doesn’t read music so had to play by ear.

The studio thought the Old Man dying was maybe a bit too down, but Ramis says the film would be “toothless” without it—Phil had to recognize that he was not God, that he was powerless. Hence what Ramis calls the “Superman” section of the film, Phil doing what he can do to help people in that one day.

Brenda Pickleman, who plays Buster’s wife, apparently hands out pens shaped like pickles so that people remember her. This is not a vital piece of information, but Ramis shared and I was amused.

(Interesting detail I’ve got to figure out. Ramis describes getting a tear in his eye when he read the wedding scene (which later became the Groundhog Ball scene). [some wedding symbology in the film] So, that scene has to have come from Rubin, but it’s not in his original screenplay. It’s in the “second revision” by Ramis. So, I guess there was another Rubin draft that Rubin doesn’t mention in his book.)

Quite famously, the cast and crew voted on set that Phil and Rita had not made love the last night in the film. I’ve read that Murray had a problem figuring out if he should be wearing his clothes from the day before or not, and he may have been quite difficult about it.

Today’s reason to repeat a day forever: To find the appropriate cast and crew to get some more thorough commentary tracks, a la Jackson’s Lord of the Rings.