for the first time in years

Dragnet is on one more time. 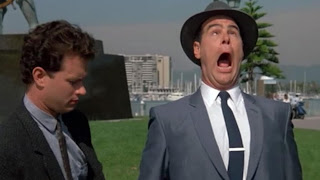 I don't think I have anything specifically regarding this film to say today, but 1) I wanted to watch it at least once on the larger screen that is my tv (I've been on a sort of emergency roadtrip and have been watching the film on my phone that last three days), and 2) I didn't quite want to transition to the next film on my childhood deconstruction (aka movie life) list; rather, I wanted to gather a sort of interlude of thoughts about all the movies so far as it were. The question of what this movie (in particular, but so many other movies from my childhood more generally) did to affect my... Well, my worldview, really--it's an interesting question. Because, for example, I grew up on Star Wars, saw the first one before I can even remember, was already interested in the toys and books and whatever merchandise was out there by the time Empire came out, distinctly remember going to see Return of the Jedi in the theater (the theater that used to be at the Eagle Rock mall but was replaced with some shop or another many years ago since). I figure that was steering me toward siding with rebellion and revolution long before I rejected my religious upbringing and rebelled myself. I mean, who saw Star Wars and sided with the Empire? Only assholes and idiots, if anybody. And then you've got every cop and action hero breaking the rules through the 80s and so many comedies are about breaking rules as well. Different rules, but still. So, what else am I going to take from these movies?

Snowball Express - the banker is the bad guy.

Young Frankenstein - the cop is a nuisance, the mindless masses are the bad guys in the end.

Wilderness Family - reject the system, reject society, live by your own rules.

Apple Dumpling Gang - the criminals are the heroes.

Across the Great Divide - the story exists outside of society proper.

Star Wars - side with rebellion, scoundrels are worth cheering.

And, those are just the titles at the beginning of this deconstruction. (Sorry, I will not provide links to every one because there are too many. Scroll back to about October 2017 or so, and you'll find where the deconstruction began. It continued until I finished that encore year of the blog in April 2018, and then continued again when I woke the blog up again this past April.)

Buddy Holly Story - while this titular singer didn't have the drug problems and infidelities of so many other singers that get biopics, the musician story is inherently outside the norm; there's no need for a day job and a "normal" life when you've got music and an audience.

Halloween - the slasher film is inherently conservative but also involves titilation and irreverence.

Ice Castles - maybe one of the least rebellious films on the list, but even it lets its lead wallow in her sadness and pain for a bit before rebuilding.

Heaven Can Wait - arguably blasphemous, irreverent, and all about a guy in a rich man's body who instead aims for sports. Like the musician, this puts him outside the norm.

Meatballs, The Villain, The Jerk, The Empire Strikes Back... So much irreverence and unlikely heroes. Celebrating mediocrity and weirdness.

Mannequin - celebrates the strange, the gay, the openminded, villainizes the capitalist and the security guard.

Some Kind of Wonderful (which I actually skipped in this deconstruction because I had previously written about it in this blog) - embraces high school outcasts and rejects, forces the popular girl to reshape herself.

The Secret of My Success - lie, cheat, forge documentation, steal the job you want rather than work through the system.

Campus Man - objectifies male bodies, embraces criminals and even the illusion of criminality.

The Untouchables (which I also skipped in this deconstruction because I had previously covered it in this blog) - while it's about law enforcement, just check out Connery's speech--


They pull a knife, you pull a gun. He sends one of yours to the hospital, you send one of his to the morgue. That's the "Chicago" way!

--and tell me that's not modern policing in a tiny nutshell that has also exploded into something far bigger because of popular culture's embracing corrupt cops, outlaw heroes, and criminals who just happen to be slightly better people than other criminals they have to fight.

And now Dragnet where even the good cop has to embrace breaking the rules to get the bad guy in the end, while also embracing a sort of wholesome atmosphere where everything pornographic, pagan, satanic, corrupt is vaguely positioned to be defeated (but with a brief stopover by our heroes at a strip club because it' she 80s and you need a little nudity, and I guess Sylvia Wiss' breasts she showed off to Friday weren't as spectacular in the opinion of the producers as the film wants you to believe.

It's like Hollywood wanted us all to reject the rules of society or something. And, I listened.
Posted by robert e g black at 9:06 PM