everything about you is undesirable

Todd's business idea early in Campus Man is for people to be able to check their shoe size by putting their feet up to their tv screen and then the right size shoes will be mailed to them. Not horrible. But, not good. Worse is that he's walking around in public with his pants tucked into his socks. I mean, I had some pants with Velcro-closing cuffs about this time, and there were parachute pants... about (?) to become briefly popular, so tight around the ankle but somewhat baggy otherwise was a thing. But, Todd approximating it by tucking his pants into his socks is both kinda of awful and very much on the nose for his character--thinks he's got business savvy but fucks up his college tuition and goes to a loan shark when the bank won't front him $12,000 for a calendar.


(Which is specifically because it's a "pin-up calendar" not because it invokes men, so how did Todd fund the previous calendar?)

Somehow he got, I guess, a different loan for his previous female calendar. And, his money troubles don't include his loan payments, so I'm guessing he made good on that loan, so why is this one such a problem? The movie really wants us to buy into the novelty of putting men in a calendar is why. That's all. It being novel isn't even that important to the plot. Actually, this movie is full of very specific things that just don't matter. Like the guy at the party who walks around with his dog over his shoulder. No point to that. Todd not being under his blanket when Brett monologues, but still overhearing it. No point to that. Molly calling Todd's previous calendar pornography but selling out for $1000 to her choice of charity to help with his new one--that hypocrisy is unnecessary. There's no real conflict to it. It's a single conversation and she's in. It's rom com bullshit, basically. Molly and Todd are supposed to be together so they must have some clash of personalities, even though Todd seems perfectly fine to help with her charity stuff and other than pushing his pornography comically away she seems perfectly fine with him and what he does as a (allegedly) two-steps-ahead entrepreneur. Plus there's Dana who's got a thing for Brett because, duh, someone has to, even though it's ridiculous from the start that Todd doesn't see the inherent value in, to put it bluntly, the male flesh he sees on display all the time being best friends with Brett. Like a guy who will exploit unassuming college girls for money wouldn't be constantly thinking of other people and things to exploit.

But, that right there is what makes this so very 80s. Business guy has blinders because shallow cultural stuff. He risks his life with a loan shark for the startup cash but doesn't think far enough ahead to realize that there are limits to what college athletes are allowed to do. And of course Image Magazine swoops in because this absolutely novel calendar has to get attention, and it's very 80s for a corporation to exploit, as Todd already has done, college kids for money. An their exploitation means Todd's exploitation can't be that bad. And, he's a bad enough negotiator that Molly can name her price and not come down at all and he gives in in like ten seconds. Men and women use and abuse one another, or something like that, or maybe I'm channeling The Room, but the point is the same. The novelty of the movie is that it's male bodies being put on display. That's the only card it's got to play. 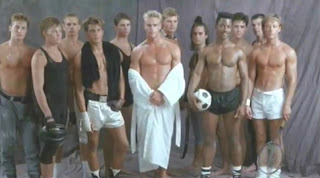 Of course, it's a good card to play. A card that needed playing in the 80s. I've said I don't think the calendar was a novelty, but putting that same thing on the big screen for a (potential) mainstream audience was novel at the time. The 80s were more about casually exploiting female flesh on the big screen.

I want to say that aiming for something new, exploiting something new, makes for a good movie. And, it's entertaining enough, even watching it now. But, Todd is an idiot, and I think we're not supposed to think that. Slightly misguided, maybe. But, not an idiot.

But, even that disparity is kind of an 80s thing. The movie just tells us he's good at business so we accept it. Movie tells us some character is an expert at something and we take it at face value. It's simple cinema. If a movie like this were made now, I'd like to think a screenwriter would do better than that.

But, I doubt it. We want shit spelled out for us. We want it easy.

Todd's not just an idiot but also kind of a dick. But, I've said many times in this blog, we love a main character who's an asshole.
Posted by robert e g black at 11:19 PM