1) The messaging of The Secret of My Success is that a lone white male from bumfuck flyover Kansas is going to make it to big city and be such a hard worker because he grew up on a farm and is Grade-A middle American prime that he's not only going to kick the ass of his mailroom job but he will also successfully work a second (fake) job as an executive because bureaucracy is so stupid and complicated that he can game the system to invent a second name for himself, even though he's already called Brantley as if he was born and raised on Martha's Vineyard and not Foster Farms, and be better at all of this business stuff--and we will definitely, specifically, explicitly be shown this in a montage that let's us hear none of the dialogue and plays some crappy 80s song or another over it all and then the movie is going to take too fucking long to show how this one white kid is better than everybody else even though the fucking opening titles montage was a bunch of people of color and people of no means all turning their heads, but I guess them turning their heads was really them all taking notice because this kid was going to come to the city of hostile corporate takeovers and overcome all of that in the most American way possibly--by doing too much, working two jobs when he's getting paid for one (committing fraud along the way of course), and convincing a company to expand in the late 80s as if that's a novel concept; the novel concept is that out of all the corporations in New York, Brantley finds himself at two of the ones being hostilely taken over and of course, he is taken by surprise by the first one and he gets a nice meaningful moment in his tiny cockroach-infested apartment so that we feel for him and want him to succeed, but then he's off to succeed by a) nepotism when his uncle gives him a job, b) sleeping with both a higher up (at least she is later) and a fellow executive, c) lying about who he is, d) forging paperwork, and e) being a capitalist twat sonofabitch who we all find charming because he's a basically Alex P. Keaton coming from an even smaller town than he was in Family Ties and we want to believe that a small person from a small town can make big because, hey, then any one of us can, and that's the American Dream.

2) That messaging is stupid, and it's done poorly, and we only fall for it because the 80s were the land of the montage and if a montage happens, we believe that progress is taking place, like in Iron Eagle when they've got like two days to make their plans and commit their fraud and their theft to get a teenager on an international rescue mission but the montage might as well be covering 2 months as much as it is covering 2 days, because who fucking cares when it offers us the change to cheer on another white kid from some place in America, because oh my founding fathers, that could be up there in that fighter jet, that could be in the New York City corporation fighting off a hostile takeover and being a fucking hero to my parents back in bumfuck nowhere. 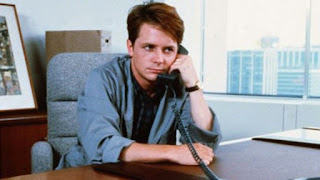 Bonus #3) It helps if you have your lead be a little creepy and act like a stalker in addition to all his other crimes, and if you also get Helen Slater to march toward the camera at some point so the audience can remember the far better Legend of Billie Jean, but even that movie had a dirty of white folks, so who fucking knows?
Posted by robert e g black at 7:39 PM