- June 05, 2020
I have something to say about Campus Man still, but not so much that I will be watching it again today. As Dragent begins, I will say this:

Aside from the novelty of male bodies, something Campus Man has going for it is that while it could lean into exploitation, instead it aims for something more personal. The relationship between Todd and Brett is at the heart of the film, and it is fairly easy to believe they are actually friends and that Brett would sign that Image contract to protect Todd’s life, and would also later threaten to kill Todd and it is believable. The movie is a little tedious, but still fairly easy to watch, and that their friendship feels genuine is something that helps a lot in that regard.

Dragnet offers up a bunch of shots of Los Angeles like The Secret of My Success offers shots of New York, but this feels (maybe because of the deadpan narration from Dan Aykroyd as Friday) like a more genuine sense of the city, and a sort of spirit that will matter as the film goes on... like there will not be a “police police police” montage to match that film’s “business business business” montage.

Plus this has some fantastic (and slightly stupid) comedy that lands well, like the announcer telling us this is based on a true story and names have been changed to protect the innocent (just like the old Dragnet tv show, and then adds, “For example, George Baker is now known as Sylvia Wiss.” Silly. Hilarious.

(Also, leaning slightly into 80s casual homophobia since the character of Sylvia Wiss is explicitly female, a former centerfold.)

Cold open with fire set on a load of Bait magazine by a guy who leaves a P.A.G.A.N business card behind.

And, I wanted to say something about 80s movies generally, how their shallowness is both horrifying and really comforting watching them today. I feel like a few entries ago I leaned into being political, and the last couple days with Campus Man we’d a distraction equal parts welcome and unwelcome. To me, I mean. Not that I don’t often get political in this blog, but it is usually a little subtle, covert, or only in passing. (Except for December 2015 when I went back and forth between, of all things, political-themed movies and werewolf-themed movies.) I wanted to start ranting about current events, pandemics, racism, protests, riots, etc. but I had a good day today and Dragnet is so very charming.

Like Friday’s deadpan, and obsessively detailed voiceover. It is awesome. Add his new partner Pep Streebeck’s (Tom Hanks) smartass jokes, and then pile on top of both of those a bit of satirical humor about pornography, religion, the police, and Los Angeles... and this is great. I may just sit here today and enjoy.

The one witness—Enid Borden (Kathleen Freeman)—has a wonderfully profane bit of dialogue, and I love it. Especially because it bothers Friday.

And in the middle of the car chase, one of many moments is a guy with a basketball about to get hit by the car. Before he dives out of the way, he makes a hook shot over the approaching limo, and there is absolutely no reason for that, and that just makes it funnier.

”Sit down, unless you’re growing.”

And then there’s comedic police brutality involving a drawer and a suspect’s balls, and I almost want to get into a rant... 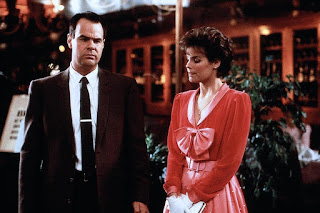 ”Granny, this is the virgin Connie Swail.”

“Thanks for trying to take us to dinner, Joe.”