we need a home address

An odd note up front: 33 years after I first saw Suspect, and maybe a couple decades since I last saw it, I only just noticed that the murder victim, Elizabeth Rose Quinn, is the woman in the opening scene talking to the Supreme Court Justice who kills himself thereafter. I don't think I ever realized that before--mostly because we barely see her face later but also because the film wants us focused on the guy who kills himself. 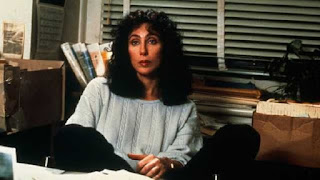 And my inability to notice--or the film not making a point of drawing my attention to--her face might connect in a way with what I wanted to write about the film today. The film paints an interesting picture of Washington DC. In the early establishing shots of the city, we see traffic, we see homeless, and after we are introduced to Kathleen Riley (Cher) in her car, three young men smash her windshield, yank open her doors, steal her necklace, and make a run for it. The film wants us to see DC as an urban environment with too many people and rampant crime. In this setting, we can easily believe that a deaf, homeless man would murder a woman for $9 (what Prosecutor Charlie Stella (Joe Mantegna) calls "the most horrible, the most senseless, the most indefensible"). And, we don't know up front why a judge commits suicide. We might assume some existential crisis instead of... or in addition to some sort of judicial corruption.


One of the movie's themes is that all of the characters are homeless - most just the bum, but also the lobbyist, the public defender, and everyone else we meet. They have places where they live, that they use to sleep at night, but they do not have a "home," and they do not have loved ones around them. Their loneliness is underlined in one of the movie's most quietly effective scenes, where Quaid sleeps with a congresswoman, and it's a toss-up whether he's doing it out of ambition, politics or need.

Roger is being a little sarcastic, of course, but really, what little we see of Riley's home does not feel lived in, whereas her office seems to occupy most of her time (and offers more comfort and clutter). I don't think we see Eddie's home at all, and he not only spends a night with a congresswoman early in the film, at one point later where he drops by Riley's place late at night, he tells her he had nowhere else to go. What is interesting is that, contrary to Roger's point, we do see the very lived-in places that homeless people stay in this film. From cardboard boxes to dark corners of abandoned buildings, even the space between two grounded boats--these are perhaps more well-defined as "homes" than any of the actual houses or apartments we see in the film. Even the opening scene, which there is a Christmas Tree in the room, is at best a home office, at worst Justice Lowell's actual office (I forget the view out the window). Aside from the homeless, the characters populating this film spend more time at work than at home, and even in living at home, many of them are effectively just temporarily living there because that is the nature of DC; congresspeople come and go, lobbyists come and go, judges, lawyers, visitors, tourists. It is a city among states, a place of transience and transition.


(Additionally, toward the end of the film, the jury is sequestered, meaning even they are moved from any permanent homes they might have and housed in a hotel.)

SPOILERS follow, you know, in case my passing hints yesterday didn't convey the resolution of the film.

Judge Helms (John Mahoney) is on the verge of being appointed to the DC Circuit Court of Appeals. A transition. (The secret corruption that led to Justice Lowell killing himself will also get in the way of Helms' appointment.) Riley is in need of a vacation, if not a life, but gets stuck with Carl's case. She wants a transition but cannot get one. Eddie makes a living getting people what they want. His own transitions don't matter. He is who he needs to be in the moment. And, transitions are irrelevant to Carl. He's deaf and cannot sign and lives on the streets of the nation's capital. He does not matter to anyone but, depending on his guilt or innocence, Riley and Stella and the family of Elizabeth Rose Quinn.
Posted by robert e g black at 8:01 PM