i’m too old for this

Some final thoughts on Adventures in Babysitting:

Chris has the cough syrup for Sara in her pocket simply so she's got an extra thing to do when she freaks out in the car. Mrs. Anderson, who is effectively what Chris will be in the future if Brenda's predictions are correct, has setup Brad's acne, so Chris can slap the chocolate bar out of his hand, and Sara's cough just so Chris can try to get her to drink it. Setting up the details for the freak out is nice screenwriting, except Brad's acne doesn't matter to the film--he's embarrassed and self-conscious enough already around Chris--and Sara is very much over her cough (as she says, "it's been two weeks") and there is no reason Chris needs to freak out right then. She has already gotten to panic at the blowout on the expressway, she has already gotten to flinch at the sight of Handsome Jack, at the gunshot through the window, and at Joe popping up in the driver's seat; there is no reason for the extra beats of the chocolate and the cough syrup. It's probably just screenwriter David Simkins version of the same maternal paranoia demonstrated by Mrs. Anderson just as much as it's an opportunity to push Chris down a notch.

The Brad crush situation is a little weird, but mostly because it isn't actually that weird. He's 15, Chris is 17. Her calling him a kid (more than once) is odd. And, rejecting him because he's a freshman is as well. Since Elisabeth Shue is 23 or so, playing 17, why can't she just be a couple years older. If she was out of high school already, but for whatever reason (I don't remember if we called it a "gap year" back in '87) hasn't gone to college yet, that would explain why her boyfriend is played by a 28-year-old (and he really doesn't need to call her "little girl"), why she and Brenda feel lost/trapped in their suburban lives, and would still position her neatly enough to hook up with George Newbern's college guy at the end of the film (or if the film was really daring, she's somehow hook up with Joe, but that would probably push the film's race relations a little farther than its intended audience would want). And, she would more obviously be too old for Brad (who Keith Coogan is 17 playing 15). Plus, in the minds of the audience, we've already seen her play a teenager in The Karate Kid three years earlier and some of us had seen her as a college student already in Link just the year before Adventures in Babysitting. I know some actors get stuck playing teenagers for a while, but the film could have actually played up the idea that she's not a teen, that she's leaning into adulthood a little more than she is, and the whole babysitting-as-preparation-for-motherhood angle would have more depth.

The Thor stuff amuses me more now I think that it may have back in 1987. In 1987, I knew nothing about Marvel's Thor. I wouldn't read any Avengers or Avengers-related comics until about 5 years after this. But, the movie leans hard on the color scheme of blue and red (which for a kid like me then, probably felt a lot more like Superman, but that would still work). Knowing more about Thor now, I imagine that it would be more meaningful if Sara offered him her hammer instead of her helmet, but the helmet is a nice sort of metaphor. Hats couple easily with identity, and giving a hammer to a mechanic... That feels like something he's already got. While he claims to have a hat like hers at home, he probably doesn't, but it makes for a sweet moment, this little girl giving up her shiny helmet and Dawson letting them go without full payment.

Speaking of Sara, that character is awesome. From her obsession with Thor (and all the artwork in her bedroom) to purposely embarrassing her brother in front of Chris, to how much she gets into Chris' urban legend story, to laughing at the blowout and grinning at the gunshots. She tries to keep Brad from embarrassing himself further in front of Chris. She thinks the gangs on the subway are cool. She casually steals a pastry and wanders off just to stare at toys. And, she just as casually digs in Chris' purse earlier. We can hope her love for Thor will keep her from a life of crime herself. 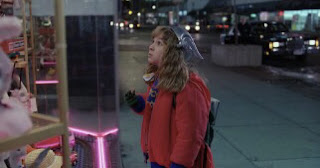 Ultimately, Adventures in Babysitting holds up pretty well, even though I think some details would need to be changed or deepened a bit if it was made today.
Posted by robert e g black at 6:43 PM