he wasn’t supposed to be there

If you've been reading this blog lately--


and you're still reading?

--you know I'm maybe a few steps past your average bleeding heart liberal. I side with extremists. I appreciate a violent rebellion. It occurs to me as today's film in my "movie life" list--


having skipped both Summer School and Can't Buy Me Love because I have previously included them in this blog in different contexts. Also, I realized partway into writing what follows that somehow I put today's film a year early on my list, but oh well, it's already on

--gets started, this might have been my first brush with the kind of 60s radicals that I would become much more enameled with in college (the second time). The movie, by the way, is Running on Empty. 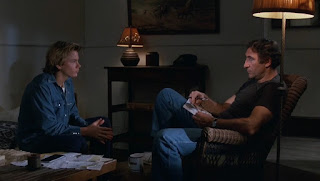 A couple of 60s radicals, responsible for a bombing in '71 that blinded a guy, live their lives on the run, moving and changing names every few months when the Feds get close. Thing is, they've got two kids. The oldest of which takes center stage for a lot of the film Is played by River Phoenix, who I would've already been familiar with by this point, having seen him in Explorers, Surviving, Stand By Me, The Mosquito Coast, A Night in the Life of Jimmy Reardon, and Little Nikita. And, IMDb trivia just made an extra set of connections I didn't know previously:


1. Naomi Foner, who wrote the film is the mother of Jake Gylenhaal, and apparently, though he was just 6 at the time, Jake spent time on the set watching Sydney Limet directing and River Phoenix pulling some weight on the way his role was played, though Phoenix was only 16 at the time the film was made.

2. Additionally, in regards to Phoenix, he was born just a day before the bombing that inspired the premise of the film. He was born 23 August 1970. On 24 August 1970, a bomb exploded at Sterling Hall, University of Wisconsin, and Robert Fassnacht, a physics post-doctoral researcher was killed. In the film, of course, the Popes were not responsible for a death.

The Popes remind me specifically of a couple of the more famous 60s radicals that went underground--Bill Ayers and Bernardine Dohrn. They not only had their own children while living on the run, but also raised the child of two of their fellow Weather Underground members, Chesa Boudin, who was elected District Attorney of San Francisco just last year. In the real history, the FBI had a tendency to break the law in their efforts to catch people like Ayers and Dohrn, so, while Ayers has openly admitted to participating in bombings, and written about his radical life in multiple books, charges were dropped. Ayers worked with Mayor Daley in Chicago, he was awarded Citizen of the Year in 1997, and has served on several boards of directors. Far from his criminal past, and also far from this fictional story. The charges against Ayers were dropped in 1973.


(State charges against Dohrn remained until she turned herself in in 1980.)

Arthur and Annie Pope are still on the run 17 years after their crime.

Of some of their underground methods, Ayers writes in Fugitive Days:


We invented all kinds of ways to obtain false identity papers, and got busy building multiple sets of ID for each of us and for every contingency. We stole wallets and purses at first without much concern for our victims--

And, just as I'm copying this bit from his book, Gus shows up and offscreen steals from a patient's purse, which will eventually lead to his arrest and Annie and Arthur having to run once again at the end of the film.


--but it was a risky business that could reel out of control without warning. We were trying to learn artfulness and stealth, and stealing purses was definitely from the old school. More important, these papers were unreliable and had a short shelf life. As soon as they were reported missing, everything stopped working, and it could prove disastrous to buy a car, for example, or rent an apartment on a sour ID. Instant tracking...

We soon figured out that the deepest and most foolproof ID had a government-issued Social Security card at its heart, and the best source of those were dead-baby birth certificates. I spent impious days over the next several months tramping through rural cemeteries in Iowa and Wisconsin, Illinois and North Dakota, searching for those sad little markers of people born between 1940 and 1950 who had died between 1945 and 1955.

Gus is old school. He still wants to fight. And, he wants Arthur to rob a bank with him. As he points out, aside from the running their are forced to do, Annie and Arthur are effectively living like a regular couple, doing regular things.

At the beginning of the film, before they are forced to run, they even have a dog, Jomo, that they leave behind. Ayers writes of getting a dog,


We got a snow-white Samoyed puppy named Lolita (for Lolita Lebron [one of a group of Puerto Rican nationalist who opened fire in the United States Capitol, 1 March 1954, went to prison for the attack, and was granted clemency by Jimmy Carter in 1979]) that first year who disappeared one night, and soon we inherited an Afghan hound named Maddie, short for madrone, a tree we loved. Jeff later gotta. Spirited Irish setter who accompanied him everywhere, named Red Dog, or sometimes Under Dog, short for Wonder Dog. Now our safe houses all had to be dog-friendly places as well.

Owning a dog for most people was commonplace--completely unremarkable. For us, having a dog marked a dramatic new direction. Months earlier it would have been unthinkable, an irresponsible indulgence, derided and ridiculed. The time it takes you to walk that damn dog is time stolen from organizing, a comrade might have said, and another would have added, The food that thing eats could feed five Vietnamese for a week. But now, whenever Jeffrey showed up with Red Dog, someone, or several people together, would romp around with him in dizzy excitement. It was strange, but the dogs, too, changed our lives.

And, in their latest set of lives, Danny Pope (Phoenix) is getting old enough that he forms a bond with a local girl (Martha Plimpton) and his potential collegiate future--though his ability to practice has been limited by his family's lifestyle, he has some talent as a musician--is looming on the horizon. His parents' past lingers and his future beckons. It's a simple enough premise, and an interesting one considering this is the tail end of Reagan's America.


For over a decade I was on the run, an American fugitive fleeing what the government win kingly calls justice. My purpose then, following years as a community organizer and movement activist, was utter defiance--to blaze away at the masters of war, the purveyors of death, the perpetrators of hatred. I wanted to penetrate what they posited as impenetrable, to pierce that smug veil of immutability, to open spaces for unimagined choices. Propaganda of the deed. My weapons were explosive words at first, slowly replaced by actual bombs. That is, of course, a troubling aspect of the story. Among my sins--pride and loftiness--a favorite twinkling line to comrades and acquaintances alike, guilty as hell, free as a bird--it's a great country. There were a few virtues: confidence, passion, optimism and hope, some humor. I was not alone.