i love this story


...the legend of Arturo, who was a Portuguese fisherman.
He met this beautiful girl his first night in town--Catarina.
And eventually they fell in love.
But the problem was that Catarina's father was the territorial governor.
He didn't want his only little girl running around with a lowly fisherman.
So he told Arturo that he'd have to ship off.
Which he did, but not before he told Catarina he'd be back for her.
And when he came back, he'd signal with three long blasts,
So she could dive off the rocks and swim to the boat,
And they'd be on their way.
So, a year later, everything went as planned.
But when she was swimming out to the boat,
The fog got so thick that she couldn't find the boat.
Arturo panicked and he called out, "Catarina! Catarina!"
Catarina yelled back, "Arturo!"
With that, he just dove right off the boat into the icy waters,
And they never found each other,
And they both drowned.
The legend is,
They reunited at the bottom of the sea,
And every time you see the spray going up, it's them.
Making love.
Forever and ever. 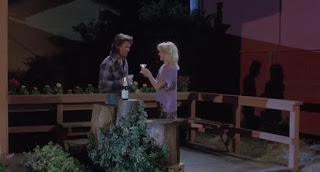 There's the class tale in a nutshell. Star-crossed lovers, or whatever you want to call them, who find their way to each other no matter what gets in the way. And, as I said yesterday, the classist story here overpowers the sexist problems. Additionally, specific aspects the structure of the story make it work as well. For example, sex. We know from the beginning of the film that Joanna's reasons for not having children might not be her own. Her husband Grant wants has mentioned having a baby, Joanna tells her mother over the phone. "What should I do?"

Her mother replies in a infantalizing tone, "Darling, if you have a baby, you won't be the baby anymore."

Joanna is the kind of high-class character we expect needs to be forced down a peg. And, I wonder just why she doesn't want children with Grant, whether it is her leanings because childrearing is beneath her, her mother's doing as she treats Joanna like a child herself, or even Grant's; while he may have mentioned having a baby he might want one simply to cement the marriage, because as we learn at the end of the film, the money is hers. He may some from some sort of money, but financially, this marriage is better for him than Joanna. An heir tying them together would secure his position, perhaps.

The thing is, we cannot be sure that Joanna really doesn't want a kid, or that she doesn't enjoy sex. She may sense Grant's ulterior motives, or he might be the womanizer he is later in the film whenever he gets the chance, and she knows it.

So, jump forward a bit and the early problematic thing may be Dean kissing Joanna/Annie--

(And I only noticed yesterday, after years of watching this movie so long ago, how close her two names are to one another. An easier way for her to slip into the fake identity, I suppose.)

--supposedly, (but, of course, not really) jog her memory. Were Dean to take her home and insist on sex, the ruse would take on a much more problematic tone right away. Instead, while he talks about the miles they put on their bed, and he comes home deliberately smelling of liquor and acts like he wants sex, but we can assume (and he has said) he is just having some fun with her. They do not actually consummate their illusion of a marriage until Joanna has not only slipped finally into the role of Annie but has rewritten Annie in an image more comfortable than Dean has presented. She wears clothes that fit. She keeps the house clean. She keeps the kids in line. And she defends them against their principal. And finally, she celebrates her birthday as Annie. Joanna has, regardless of the initial setup, become Annie and the audience can see that it is good for both her and Dean, so we see something consensual.

And before we even get to the night they have sex, we see that Dean feels guilty about his ruse and wants to come clean--in fact it starts when he sees how much she has cleaned up the place and apologizes for their fight the night of the poison oak, and is solidified the night of her "birthday." Even if we are starting to have a problem with it, the film actively lets us off the hook. And then it lets us know that Grant is coming back and we know Grant is a cheating dick, and we've seen Annie happy, when Joanna seemed incapable. Plus, we inherently mistrust the rich, and don't want Joanna to be who she was before.

And, it helps that we have a tendency to trust the white male protagonist. The movie lets us hear Joanna's voice before Dean's but we follow him from his artworking to the yacht. He is our POV character.

In a way, so is Joanna as the story goes. Notably, after the poison oak night, and Joanna firmly becoming Annie, we follow her out when she finds out Dean has been working nights and letting her believe he's out having fun with the guys. We saw her unhappy on the yacht, and we see her uncomfortable and out of sorts at Dean's home, until she stands up for herself with the hose. But, even in that scene, she has already visually become Annie. It was that first day of chores that challenged her, but she has moved past that. And the film would have us believe--and we do--that she is better off because of it.

Hence Dean's guilty, really. In becoming Annie, the ruse has become something much bigger and harder to justify.
Posted by robert e g black at 9:52 PM