i am still in control here

It did surprise me that I didn't have more to say about Innerspace. Or anything to say about it, really. It was like I could tell why I thought it was entertaining back in the day, and it was still fun, but there just wasn't much substance to it. Or I wasn't in the mood for the substance it had.

And, so tonight, jump out of order to watch first Rent (621 622 623) and now back to 1987 for a little Adventures in Babysitting... Both directed by Chris Columbus. Both co-starring Anthony Rapp. And not just a coincidence. I mentioned that Rapp was in the movie I'd be watching later to my daughter and the conversation turned to Rent and the poor adaptation that Columbus did, and yada yada yada Adventures in Babysitting is on now. 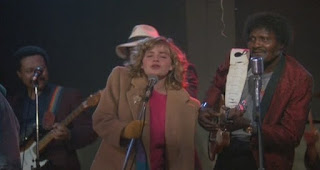 And, while it has been years since I've seen this one, too, I feel like there will be things to talk about. Like Chris (Elisabeth Shue as the titular babysitter, not the director, who is clearly more at home directing this (his directorial debut) than an adaptation of a Broadway musical) mixing up her urban legends when they're on the expressway, like the clip from the end of Halloween (427 1162 1163 1164 1165 1166 1167 1168 1169) that plays before they leave for the city (because, of course, Debra Hill, produced both this and that), like Jack Pruitt saying he's got his hand in the glove compartment but really he's just got a gun in there... because that's better. Like Sara having such a good time when Pruitt drives like a madman.

I mean, it's been a fun night, watching (and making fun of) Rent and now reciting lines along with Adventures in Babysitting like I just watched it last week rather than twenty-odd years ago. And, while I was plenty liberal by the time I saw Rent--on stage on its first tour and several productions since, and of course the film version, the filmed-live-on-stage version, the live-on-Fox version--when this movie came out, I was still embedded in a conservative upbringing, so Brad calling Thor a "homo" was still funny and I didn't quite notice that the film has got some great messaging when it comes to criminals (who are black) and guys with hooks for hands are helpful and the white boyfriends is a dick. This is suburban white kids enter the city and it's a fantastical nightmare of a place like all their white conservative parents surely told them, except it isn't. The car thief is a nice guy, and the dodgy garage owner is nice too. I mean, there are gangs on the train and they've got knives, and the guys running the car theft ring are certainly dangerous but the whole point is that Chris et al are having their eyes opened to a larger reality than they expected to be in the middle of.

And, 11-year-old me was loving every minute of it. Even the somewhat questionable bit with Chris having to sing the blues in the black club...

We white folks loved this scene. And, all these year later, I'm not sure if it was purely because it was entertaining or because black folks were cheering on the white girl who says she can't sing and then immediately gets into it like she's... well, not like she's a professional or anything, but it's like the movie wants singing the blues to be readily adoptable by anybody, especially the suburban white girl.

Or maybe I'm projecting. Or retrojecting. Is that a word? Conjecting? Playing up my liberal tendencies to amuse ya'll who are reading this. Or, do I mean every word?

Like, do I seriously think Dragnet is partly responsible for police brutality from officers who saw the film when they were kids? Do I think Iron Eagle taught us to distrust the system to get things done?

Do I seriously think Innerspace isn't worth talking about?