when i was your age

I don't know how soon it was after The Princess Bride came out that I saw it, but I did see it in the theater. My sister Bobbie had already seen it. More than once, I believe. And, years later, I was surprised to learn (and somewhat wrongly) that the film wasn't a big hit when it came out. It opened on only 9 screens, and went wide (but nowhere near today's standards, at only 622 screens) 2 weeks later. At that point, it was #3 at the box office. It stayed there for a couple weeks and then slipped down from week to week. It made $30 million which definitely made it profitable. And many people I knew saw it, or saw it on video at least. And, in high school, we even showed it as a fundraiser movie night (and some fool tried to fast forward through Inigo's "son of a bitch" line, and poorly). 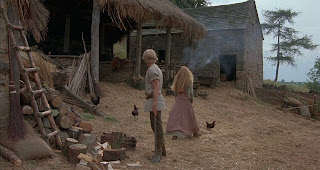 I don't imagine that I have much to say about The Princess Bride in passing like this. I love the film, could watch it most anytime, but I feel like most of what could be said has probably been said--


(For example, I wondered about the fencing terms once and learned they were apparently real, and I just found this site the describes in depth what they mean--Fencing Language in "The Princess Bride"--so I don't really need to get into that.)

--so barring obsessing about the film for days on end, I don't imagine me coming up with something particularly insightful and novel.

Still, it made the list, and there's always a chance.

The thing is, The Princess Bride contains so much of what I love in films. As a kid, especially, the action and adventure, medieval swordplay, even magic (or miracles, anyway), was wonderful. But, you've also got clever humor, interesting characters, a fairy tale romance at the story's heart. Plus,

Plus the lovely framing story with the grandpa and grandson, of course. Wrapping up a great fantasy story that stands out in 1987. In he 80s, really. Willow will come in 1988. Labyrinth was out in '86. Legend and Ladyhawke in '85. The Neverending Story and Conan the Destroyer in '84. Krull and Return of the Jedi in '83. The Beastmaster in '82. And others. I loved all those 80s action movies, of course, but I also loved me some fantasy. And, science fiction. And horror. Hell, I loved most anything. Put a movie in front of me at 11 years old and I will watch it, I will likely enjoy it, and I will want for more. Fortunately, between early versions of cable television and home video, so many movies were readily available. And, I wanted them all. And, if no new one was immediately available, I would watch an old one, or several. One day that I was home sick from school, for example, I just hung out and watched all three Star Wars films because, why the fuck not?


(Speaking of Star Wars, I just noticed that grandson has Burger King's Empire Strikes Back glass on the shelf behind him. Specifically the Luke and Yoda one. I had that glass. I had all those glasses. Twice. We had them back when they were new and I bought them again at the PCC Flea Market when I was in my 20s. Alas, I do not have them today.

I do have a Hogwarts cup, but that was actually purchased just last year at Universal City Walk.

I also have a large wooden (and metal) D&D cup, gifted to me by one of my players on DM's day a couple years ago.)

I did notice something new (aside from what I just mentioned parenthetically, that is) just now. When Fezzik and Inigo are reunited, Fezzik rhymes two more times like they were doing before--


Inigo: I am waiting for Vizzini.

Fezzik: You surely are a meanie.

--and that's a lovely thing.

Also, since I've not said it yet, William Goldman's script holds up to repeated viewings. So well.
Inigo's righteous quest for revenge. Inigo's beautiful friendship with Fezzik. Vizzini's arrogance and silly confidence. Westley's love for Buttercup. Buttercup's love for Westley. Grandpa's love for grandson. Grandson's love for grandpa. Grandson's horror at hearing that Westley is dead. Humperdinck's ridiculousness. None of it gets old.

But, I really don't think I have anything to say about The Princess Bride.
Posted by robert e g black at 8:15 PM