you mean it wasn’t you?

- June 28, 2020
I remember two things about Jack's Back even though years ago I watched it many times. The premise and the twist. If I spoil the twist I will warn you. 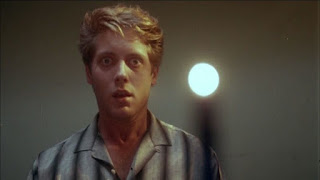 Opening scene is a little too slasher, and the first scene after the rather plain titles sets up the premise--someone is copying the Jack the Ripper murders 100 years after the fact--too explicitly and also we're already at the night of the last murder? What is this movie even about?

Spader is a med student, or maybe a doctor already, and he helps administer aid to homeless people, and stops by a free clinic (he may work there) and I have no memory of any of this but for his Cubs hat.

Oh no, his boss' speech reads like every police captain in every 80s movie. John (Spader) talks himself out of getting fired and then he's on a news report talking about the homeless situation in LA and I am intrigued, because plotwise this is a thriller, but I suppose a little social commentary is not outside of its purview.

It occurs to me--oh, there will be SPOILERS right away, now--John's med student role, his interest in the homeless--that might feel like something that is going to turn interesting except John is not going to remain our main character for very long. That's just a minor SPOILER. The big one is yet to come. Like Bloodsport--although the I may have neglected to mention this yesterday--Jack's Back's story structure seems right on the nose. Just over half an hour and John is hung, presumed dead, cut to... John? Waking up. Was it a dream? Why does he see police outside? (I know the answers to these questions. This is the twist I remembered. John is dead but in the moment watching this all those years ago, it was a big what the fuck? moment. This James Spader introduced for act two is John's previously unmentioned twin brother Rick.

Now, I just remembered only a few minutes ago as John was being murdered that Richard will later... be hypnotized I guess, to remember the details of the scene because he dreamed about John's death as it was happening. What I forgot, or maybe I'm overthinking it now, was that Rick is a little psychic otherwise, as well. Sitting in the interrogation room at the police station, he is left alone briefly, he nods his head toward the obvious 2-way mirror, lights a cigarette and starts to smoke, then offers his cigarette toward the mirror like he knows the Doctor behind the mirror (Robert Picardo) is also smoking.

Okay, this hypnosis just helped him see who killed his brother. Which--SPOILERS--is not the same killer copycatting Jack the Ripper, though the movie wants us to think it is, which is strange, because then what do we expect is going take up the rest of the movie?

The way I remembered it was that John's death was the transition from act two to act three, not act one to act two, and we spent more time with John somehow getting connecting with the police investigation. I guess I conflated part of Rick's part of the movie with John's.

Rick finds a Polaroid of his brother and others at the clinic, including Jack who killed John, except then Jack just shows up at Rick's place before he's had any chance to find out who he saw in the photo. Someone is copycatting Jack the Ripper 100 years after the fact, right? But, the police are wasting their time blaming dead John and then chasing Rick as their new suspect, and the movies is spending all of its time on its own red herring in Jack.