what i’ve been explaining in some detail

- June 23, 2020
I think I forgot that Dean (Kurt Russell) makes art with chainsaws. That's how we are introduced to his character before he heads off to work on the yacht Immaculata. Later, there's some artistic stuff going on with the miniature gold course, but the artwork there comes from Joanna (Goldie Hawn); he handles the technical aspect and the building. Which his work in Joanna's closet at the start of the film sets up his engineering ability fairly well. His "objects de art" kinda gets lost. 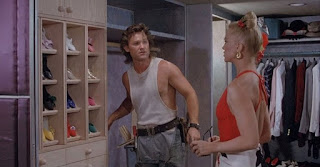 Looking back at Overboard with a modern lens, the plot is problematic, but the classist leanings outweigh the sexist leanings to create something more positive than the plot implies. Especially in the hands of director Garry Marshall. Still, even in '87, not everyone cared for the film. Michael Wilmington, Los Angeles Times, 18 December 1987:


Unfortunately, Joanna eventually turns goody-two-shoes herself. All those layers of snobbery peel off to expose a bouncy, bubbly Hollywood honey bunch ready to cook and mother up a storm.

The plot seems derived from Lina Wertmuller's "Swept Away"--itself an update of Barrie's "The Admirable Crichton."

Joanna is lost overboard near the Norman Rockewell-ish hamlet of Elk Cove, Ore. Stricken with amnesia and abandoned by her slimily hedonistic husband (Edward Herrmann), she tumbles into the clutches of the vengeful Dean, who convinces the doctors that she's his wife, Annie--a plot in which Dean's four preteen sons heartily concur.

By this time, the comedy itself has gone overboard.


The film tries to mix the two 1930s movie comedy strains: Screwball romance and populist fable. But there' something nerveless and thin about it. Hawn and Russell are good, but their scenes together have calculated spontaneity--overcute, obvious.

Having watched this movie many times, I disagree with that last line. I think Hawn and Russell have some great chemistry. Considering their longtime real-life relationship, that makes sense. But, I am intrigued in passing by the comparisons to Swept Away and The Admirable Crichton. The latter is a sort of Swiss Family Robinson, Lord of the Flies shipwreck drama operating on the reversal of class structures when the titular Crichton has the practical knowledge to survive on an island over his societal betters. (While Wilimington suggests that Swept Away is an update on The Admirable Crichton, the latter just might take its own story from the earlier Robinson's Eiland, a satire in which a capitalist, a professor, a journalist, and others, are shipwrecked with a secretary who is the only one who knows how to survive practically. Similarly, Crichton becomes leader over those who used to be above him socially in Act Three of The Admirable Crichton, except, being a satire, he lords his position over them and in Act Four there's a second reversal back to something like normal. And there's a romance between Crichton and Mary, the daughter of the Earl of Loam.

Swept Away--I'm vaguely familiar with the 2002 Guy Ritchie remake with Madonna, but the original 1974 film is simpler: A capitalist woman and a communist worker are stranded on a desert island and forge a relationship. Returning home, they return to their previous lives and roles.

Which, yeah, I guess, in broad terms, Overboard is... that. Joanna is taken out of her "rich bitch" life and finds something meaningful in her life as a small-town wife and mother, and then she eventually returns to her rich life (only to want what she found in Elk Cove). Wilmington calls the film "Nielsen-ratings Populism, a superficially warm-hearted formula comedy where the values seem pre cooked. The film makers keep telling us it's better to live in happy squalor than suffer in satin on a yacht, and it' shard to believe they mean a word of it."

On the one hand, maybe I grew up in something like Wilmington's "happy squalor", with six older sisters and living in house with adequate, but not necessarily any extra, space. So then, maybe I understand how Dean and his four boys could be a good thing for a person whose prior life seems rather vacuous. But, that's the point, right? The popular audience doesn't care for yacht-owning folk like Joanna or her husband. We are fine watching Joanna get her comeuppance because we don't like who she was before and might be again in the future. We want to believe that, given the opportunity, as Janet Maslin put it in her New York Times review, this "hard, brittle, thoroughly horrible exterior of an heiress... actually conceals a sweet, spunky, hardworking little homemaker and mom [and that] All Joanna needs is a bout of amnesia to bring the better person within her to the fore." You know, nevermind Maslin's condescending phrasing with the use of "little", we see a heartfelt romantic comedy and we want to believe that rich people are really genuinely normal somewhere inside. And, it doesn't matter what it takes to get that inside to come out, as long as it happens. Maslin says the film "sinks when it becomes this self-righteous" with Annie née Joanna taking on her motherly roles to the point of, among other things, berating their teacher for not noticing their poison oak rashes. By 1987 Maslin has been a critic for the New York Times for a decade and I wonder what her perspective is like, except then I notice that Roger Ebert seems to like the movie well enough. He admits, "There is hardly a major development in the story that we can't predict 30 minutes in advance," then adds, "what does it it matter when the performances are so much fun, and there are so many comic delights along the way?" And then he's got a line that surely would have bugged the film's detractors: "This is the kind of movie that not only could have been directed by Frank Capra or Preston Sturges, but may have been." The story may be familiar, with beats we've seen many times before and many times since, but, as Roger puts it, "The things that make 'Overboard' special... Are the genuine charm, wit and warm energy generated by the entire cast and director Garry Marshall. Hawn and Russell work well together, never overplaying scenes that easily could have self-destructed."

And, I'm good with that description. Familiar beats played well. Which is the point in revisiting these old movies that I watches so many times when I was younger, isn't it? Like listening to an old, familiar song, for those of you more inclined toward music than film. It isn't the parts that are the same time and time again that matter so much as the way they play this time, this place, this listen, this viewing.
1987 blog childhood daily deconstruction ebert every day film films groundhog day project maslin movie movies overboard romantic comedy wilmington